“Chemicals have replaced bacteria and viruses as the main threat to health. The diseases we’re beginning to see as the major causes of death in the latter part of this century and into the 21st century are diseases of chemical origin.” — Dick Irwin, toxicologist at Texas A&M Universities

WHAT ARE PESTICIDES?
Pesticides are poisons designed to kill a variety of plants and animals such as insects (insecticides), weeds (herbicides), and mold or fungus (fungicides). Pesticides include active ingredients (chemical compounds designed to kill the target organisms) and inert ingredients which may be carcinogens or toxic substances. They also include rodenticides and wood preservatives.

HOW DO PESTICIDES REACH US?

Pesticides can be absorbed through the skin, swallowed or inhaled (most toxic). During application pesticides drift and settle on ponds, laundry, toys, pools and furniture. People and pets track pesticide residue into the house {3}. Only 5% of pesticides reach target weeds. The rest runs off into water or dissipates in the air. Drift from landscaping ranges from 12 feet to 14.5 miles {1}. More serious effects appear to be produced by direct inhalation of pesticide sprays than by absorption or ingestion of toxins. {2}

ARE REGISTERED PESTICIDES SAFE?
NO. Many of the “safety tests” used to test these products are fundamentally inadequate: they test for the acute (not chronic) effects of single (not multiple) chemicals on healthy (not sick, chemically sensitive or immuno-suppressed etc.) adult (not feta l or young) animal (not human) subjects exposed over short (not long) periods of time {4}. Some of the companies testing pesticides have been charged and convicted of falsifying residue and environmental studies that were used to support pesticide registration in the US and Canada {4}. Some pesticides become even more toxic as they break down. (In the US it is a violation of federal law to state that the use of pesticides is safe.)

BESIDES SENSITIVITY AND TOXICITY WHAT OTHER HEALTH RISKS ARE THERE?

WHAT ARE THE MAIN RISKS FOR CHILDREN?

Children whose homes and gardens are treated with pesticides have 6.5 times greater risk of leukemia than children living in untreated environments. {1,2}

WHO IS MOST SUSCEPTIBLE?

WHAT ARE THE EFFECTS ON ANIMALS AND WILDLIFE?

What is a GMO?

A GMO (genetically modified organism) is the result of a laboratory process where genes from the DNA of one species are extracted and artificially forced into the genes of an unrelated plant or animal. The foreign genes may come from bacteria, viruses, insects, animals or even humans. Because this involves the transfer of genes, GMOs are also known as “transgenic” organisms.

This process may be called either Genetic Engineering (GE) or Genetic Modification (GM); they are one and the same. Read more.

In your food! First introduced into the food supply in the mid-1990s, GMOs are now present in the vast majority of processed foods in the US. While they are banned as food ingredients in Europe and elsewhere, the FDA does not even require the labeling of GMOs in food ingredient lists.

Although there have been attempts to increase nutritional benefits or productivity, the two main traits that have been added to date are herbicide tolerance and the ability of the plant to produce its own pesticide. These results have no health benefit, only economic benefit.

What foods are GM?

Products derived from the above, including oils from all four, soy protein, soy lecithin, cornstarch, corn syrup and high fructose corn syrup among others. There are also many “invisible ingredients,” derived from GM crops that are not obviously from corn or soy. Read more

Why should you care?

Genetically modified foods have been linked to toxic and allergic reactions, sick, sterile, and dead livestock, and damage to virtually every organ studied in lab animals. The effects on humans of consuming these new combinations of proteins produced in GMOs are unknown and have not been studied. See more under GMO Health Risks.

Crops such as Bt cotton produce pesticides inside the plant. This kills or deters insects, saving the farmer from having to spray pesticides. The plants themselves are toxic, and not just to insects. Farmers in India, who let their sheep graze on Bt cotton plants after the harvest, saw thousands of sheep die!

Herbicide tolerance lets the farmer spray weed-killer directly on the crop without killing it. Comparative studies on the toxic residues in foods from such crops have not yet been done.

Pollen from GM crops can contaminate nearby crops of the same type, except for soy, which does not cross-pollinate. In fact, virtually all heritage varieties of corn in Mexico (the origin of all corn) have been found to have some contamination. Canola and cotton also cross-pollinate. The long-term effects on the environment could be disastrous. 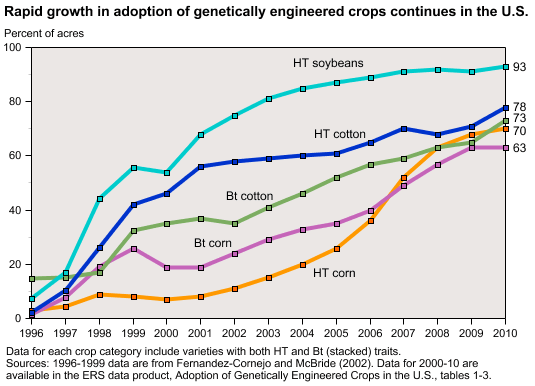