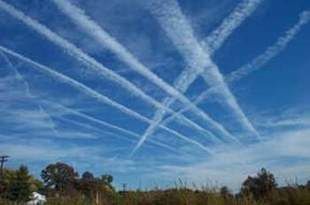 How many times have you looked up at the sky and seen odd looking wisps of smoke that look a lot like the trails left by jet planes? Numerous times, right? Have you dismissed these as mere jet contrails? If you have, then now’s the time to put away those blinkers and see the whole picture more clearly.

Jet contrails are different from chemtrails, and you need to understand the difference because it’s important. Jet contrails are pretty much like the spray and foam behind a boat that never lasts longer than a few seconds or minutes. They are formed 33,000 feet above the ground when the engine exhaust condenses into vapor trails that disappear soon. Chemtrails, however, are different even though they look like contrails at first glance.

If you look more closely, chemtrails are thicker and extend right across the sky. You can also find them in X type patterns, parallel lines, and even grids. Chemtrails are created in the air by spray systems by planes that don’t have to be at any particular altitude. Initially, it was believed that these chemtrails were merely a part of crop dusting or mosquito control, and sometimes, people were told that pilots dumped fuel to reduce onboard weight before landing. However, there’s more to it than what you have heard.

Chemtrails do not disappear into the air. If you observe carefully, you will notice that they expand and feather out like a cirrus cloud and last for hours. At times, observers have noted that chemtrails run through clouds and create a grey, dull sky. So what exactly are these chemtrails and why are they making their presence felt so ominously? Many theories have been debunked as mere conspiracy theories, but it helps to understand what is being said about these dastardly chemtrails. Here are some of the theories regarding this increasing phenomenon:

Of all the countries where chemtrails have been spotted, the US leads the list, followed by Canada and a host of other countries such as the UK, France, Germany, Netherlands, and even Australia.

When questioned about chemtrails, authorities have been evasive and skeptical, suggesting that these chemtrails are actually contrails that appear different because of the conditions of sunlight, temperature, and humidity levels inside the aircraft. They also claim that the increased presence of chemtrails is because of the increase in air traffic in recent times.

In fact, the government and authorities have gone as far as to say that chemtrails do not exist at all, and all the theories surrounding their presence are mere nonsense. While no one knows what the truth is, there’s little that you can do to prevent the harmful effects of these chemtrails.

However, there are a few things you can still do, such as:

While the truth about chemtrails could well remain a mystery, it’s always safe to be cautious and skeptical and take the necessary precautions.

Watch “What In The World Are They Spraying”: