Alfalfa is a bit of a wonder herb, as it is very nutritious and comes with so many potential health benefits. It’s also easy to grow—to make alfalfa sprouts all you need is water, so pretty much anyone can grow it at home. However, it’s also an herb that interacts with certain medicines and can cause problems if used in the wrong way, so you need to educate yourself to ensure that you get the maximum benefits.

Alfalfa, or Medicago sativa L., as it’s called in Latin, is an herb with a rich history. Back in the 1700s, it was used by sailors to prevent scurvy, thanks to its vitamin C content.

You can eat the alfalfa seeds and sprouts, or you can drink it as a tea. The sprouts are the most popular form to ingest and are often used in stir-fries. 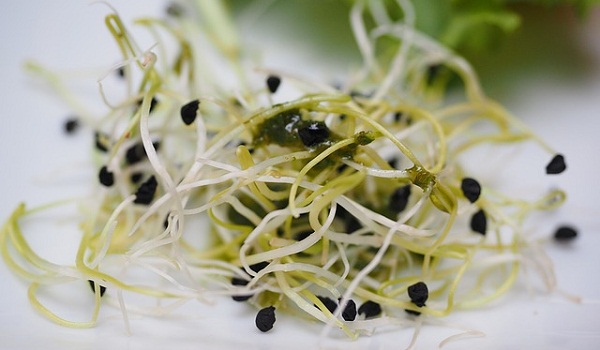 Alfalfa sprouts provide a lot of different minerals and vitamins (most notably vitamins C and K), contain lots of antioxidants, and make a great addition to your salad or stir-fry.

Alfalfa sprouts have a low caloric value, so while you can’t rely on them for providing energy, adding them to your meals gives you a lot of nutrients.

Alfalfa seeds vary slightly from alfalfa sprouts in their nutritional value and are often taken as a supplement.

A serving of 100 grams of alfalfa sprouts has (daily value percentage): (1) 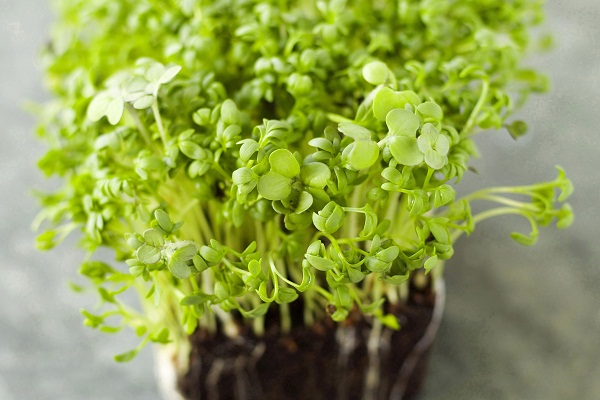 Growing alfalfa sprouts is extremely easy. All you need is a jar and some water!

To grow the sprouts, you need to soak alfalfa seeds for six to eight hours—or overnight—at room temperature. Then you rinse them and put them in a glass jar, covered by a cheesecloth (so that air gets in) and put that jar in a dark place. Sprinkle them with water two to three times a day and roll the jar after you’ve done so. Once they reach between two and a half to four inches high (takes about three to seven days), they’re ready to eat. Simply put them in a jar with water so that the seed hulls rise to the top and you can get rid of them, then drain the sprouts and consume directly. They will also keep in the fridge—in an airtight container or jar—for three to seven days.

Make sure you use clean, drinkable water for the sprouts and avoid sprouts that have been treated with chemicals or fungicides.

You can also buy alfalfa sprouts in most supermarkets.

Now, let’s have a look at the health benefits of alfalfa—in any form.

The Health Benefits of Alfalfa 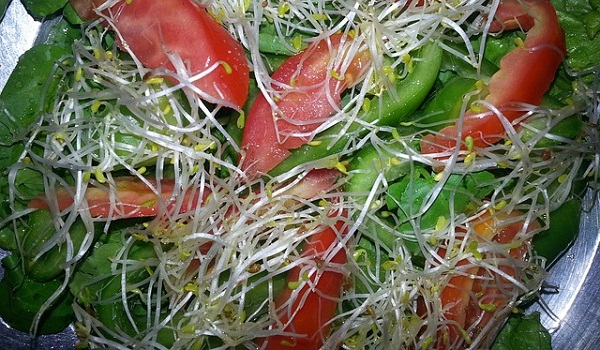 People with diabetes have problems with spiking rates of blood glucose, something alfalfa can help with. Studies have shown promise in this area for alfalfa, as it can lower blood glucose levels. (2)

Alfalfa can help your immune system fight off various diseases, as it contains antioxidants that fight off free radicals and help repair cells, which in turn helps you stay healthy. Consuming an antioxidant-rich diet has been linked to the prevention of both cancer and cardiovascular disease. (3)

RELATED: How Alfalfa Strengthens Your Body to Fight Cancer

Can Help You Fight Bad Cholesterol

In the seventies, a study done on monkeys concluded that alfalfa can help reduce the negative effects of cholesterol. As it’s antihyperlipidemic, it may help reduce the lipid levels in the blood. (4) 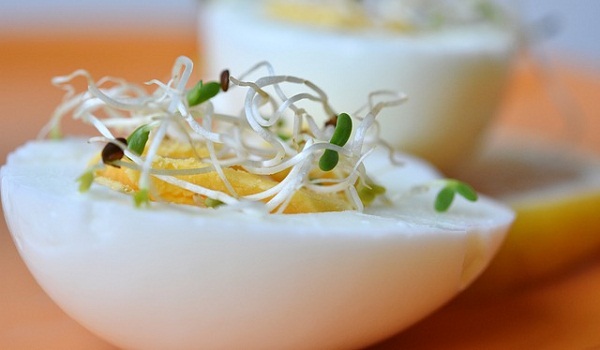 Alfalfa sprout ethyl acetate extract isn’t just an anti-inflammatory; it also shows promise when it comes to treating autoimmune diseases. In an experiment with mice, “ASEA attenuated cytokine and inflammatory responses of self-reactive lymphocytes, decreased the disease severity, increased survival and lifespan of the autoimmune-prone MRL-lpr/lpr mice, suggesting a potential of ASEA in the treatment of autoimmune diseases.” (6)

A study done on rats showed that alfalfa may have a protective effect against cell damage by XR. Saponin-containing plant species extracts, including from alfalfa, were given to rats who received XR, and results showed that they may help improve the antioxidant systems, thereby creating the protective effect. (7)

What To Beware of If Taking Alfalfa

Unfortunately, alfalfa comes with some notes of warning. (8)

First of all, alfalfa sprouts are grown in a warm, humid environment where bacteria like salmonella and E. coli also tend to thrive. As a result, there have been several cases of food poisoning caused by alfalfa sprouts. It’s therefore not recommended that children, the elderly, or people with a weakened immune system eat raw sprouts—they need to be cooked thoroughly.

RELATED: Alfalfa and Other Sprouts – Healthy or Not?

Also, while alfalfa shows promise to treat autoimmune diseases, there have also been cases where people have had flare-ups after taking alfalfa supplements long-term, possibly due to the immune system becoming more active because of the canavanine found in alfalfa. So if you suffer from an autoimmune disease, including arthritis, avoid taking it as a supplement—stick to enjoying alfalfa sprouts in your food from time to time.

Alfalfa might have the same effect as estrogen, so if you’re suffering from a disease that is hormone sensitive, please don’t take it as a supplement.

Alfalfa supplements can make you more sensitive to sunlight, so do use precaution.

Also, if you’re pregnant or breastfeeding, do not consume more than you’d find in food. In other words, don’t take it as a daily supplement. Due to the above-mentioned bacteria issue, you might also want to make sure the alfalfa is cooked, not raw. 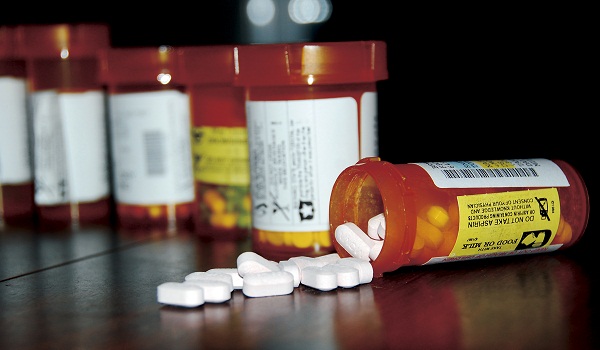 Alfalfa may have great health benefits, but unfortunately, it also interacts with certain drugs. (8)

If you are taking an anti-rejection drug like cyclosporine, you shouldn’t take alfalfa, as it can make it less effective. There is one report of a kidney transplant rejection following the three-month use of a supplement that contained black cohosh and alfalfa, possibly because alfalfa can boost the immune system. Normally that’s a good thing, but not when doing a transplant or taking any drug that suppresses the immune system, whether you’re doing a transplant or not.

Alfalfa should also be avoided if you take Warfarin or other drugs used to slow blood clotting, as vitamin K, found in alfalfa, helps the blood clot.

As mentioned, alfalfa may have the same effect as estrogen and therefore should not be taken with birth control pills or estrogen pills.

Also, as discussed previously, alfalfa may lower blood sugar and increase sensitivity to sunlight. Therefore, if taking drugs to lower your blood sugar or drugs that increase sun sensitivity (read the instructions of any drug you’re taking to find out), you should not take alfalfa.

Alfalfa can interact with the body’s absorption of dietary iron and vitamin E. So while alfalfa contains iron, it might not be the cure for anemia.

Note that drug interactions have to do with taking alfalfa as a supplement, not eating it every so often as a sprout in your food.

Alfalfa shows promise in a lot of different areas—from giving your immune system a boost and preventing disease to protecting you from radiation and bad cholesterol and lowering blood sugar. Thanks to its high levels of vitamin K, it is also a great herb for the prevention of osteoporosis. However, if ingested in high doses as a supplement, it may interact negatively with various drugs and medical conditions. It may also be unsafe to eat for long periods of time. If eaten in moderation as a sprout, it’s a great nutritional herb that may boost your health in various ways—just be sure to cook it first if you’re worried about food poisoning or are immunocompromised.