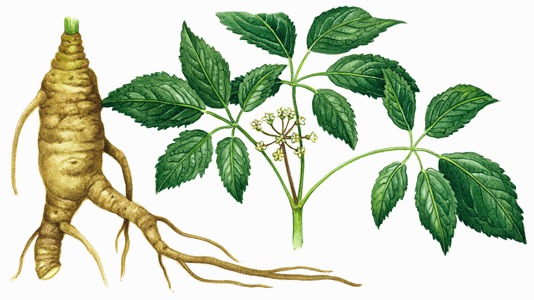 Ginseng is more than just an aphrodisiac as is commonly believed by many people. In fact, there are as many as 11 species of Ginseng that fall under the Panax genus, of which Panax Ginseng and Panax Quinquefolius are of primary importance to us. The former variety is typically found in Asia (China, Korea and Siberia), whereas the latter can be found growing on American soil.

The botanical name of this plant, panax, is itself quite revealing, as the word is derived from the Greek word, panacea, which means an all healing restorative. Apart from this, ginseng has some remarkable curative powers that have made it an important part of traditional Chinese medicine.

Typically, the root of the Ginseng plant is taken for various purposes. Ginseng is an adaptogen, which means that it fortifies the body’s resistance and promotes general health and vitality. Traditional Chinese medicine holds the belief that each type of ginseng has its own specialty. American ginseng is known for its cooling properties and is useful in curbing fevers, while Asian ginseng is the opposite and provides heat, thereby improving circulation.

Here’s a look at some of the ways in which ginseng can be beneficial when used as a medicine:

It’s always advised that pregnant and nursing women avoid ginseng. Also, people who have illnesses related to hormones such as endometriosis, fibroids, and even cancer related to the female reproductive system should avoid ginseng as it can boost estrogen levels.

Diabetics should take ginseng only under a doctor’s supervision, as it can lower blood sugar levels. Furthermore, people suffering from insomnia should avoid it, as it can only aggravate the problem. Some of the typical side effects of ginseng include agitation, diarrhea, insomnia, headaches, palpitations, and high blood pressure. Ginseng is a non toxic herb, but it should be used within it limits nevertheless.

How to use ginseng

Although ginseng is an herb, it is the root which is important and is used in medicinal preparations in many forms. Apart from fresh ginseng, the dried, treated, and cured form is also used in many cases. Ginseng is also available as a powder or extract which can be mixed in boiling water and consumed as a tea. Ginseng tea can also be prepared by pouring boiling water over thinly sliced fresh ginseng. The easier option is to simply take it in a capsule form every day or as required.

Ginseng powder or capsules are available at herbal stores, while the natural root form can also be purchased. When purchasing a fresh root, make sure you buy those which are firm and do not have soft spots or any discoloration. Typically, the dosage should be around 200 mg a day, and ginseng should not be used for more than three weeks at a time, followed by a rest period of a week or two.

Please bear in mind that ginseng does not figure in conventional medicine. If you have a health condition for which you are taking medication, then you need to verify with your doctor as to whether it is safe for you to take ginseng, considering that it may have adverse effects when used in conjunction with certain medicines.