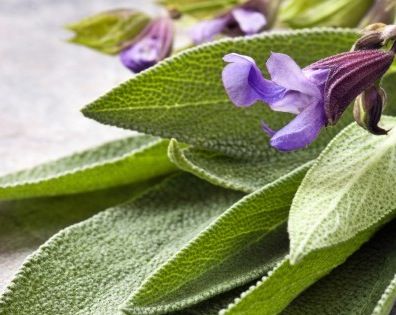 (BeWellBuzz) Sage, also called Salvia, is a subshrub of the mint family. The word sage comes from Latin salvere, meaning to heal, to feel well; related to the verb salus, salvation, prosperity, health. It’s considered healing, cleansing, purifying, invigorating and stimulating, and known traditionally in English herbal medicine as a tonic for the nervous system and memory.

Sage is used for cooking, in cleaning formulas, as a fragrance, and in aromatherapy. The FDA includes sage on the GRAS list. Modern botanists claim 700 species of Salvia, although historically at least 2000 have been named and claimed. The two that are commonly available and recommended here are Salvia Officinalis, Common sage, and Salvia Lavandulaefolia, Spanish sage.

Salvia has been used for generations in English herbal medicine to treat forgetfulness and to strengthen the brain. More recently, sage has been shown to behave in the brain like an Alzheimer’s Disease (AD) pharmaceutical.

AD drugs primarily inhibit the action of an enzyme called acetylcholinesterase (AChE) in order to increase acetylcholine (ACh) in the body. In the case of AD, ACh is progressively diminishing. When there are low levels of ACh in the body, a person’s reaction time will lag. Someone speaks, but it doesn’t “sink in” right away, and their response is notably delayed.  If ACh is totally inhibited, the result is paralysis.

But researchers found that by decreasing AChE, the enzyme that breaks acetylcholine down, they could improve brain nerve transmission (signaling), significantly delay the progression of dementia and, in less severe cases, even reverse cognitive degeneration.

Scientists have discovered that several varieties of sage, including our Common and Spanish sage, inhibit AChE in precisely the same way as the AD pharmaceuticals. One such study reports, “The essential oil was a potent inhibitor of human acetylcholinesterase (AChE)… Oral consumption lead to improved performance of secondary memory and attention tasks, most notably at the 1 (hour) post-dose testing session, and reduced mental fatigue and increased alertness which were more pronounced 4 (hours) post-dose.” [1]

Another study conferred that “members of the Sage family, such as Salvia officinalis and Salvia lavandulaefolia, have a long history of use as memory-enhancing agents coupled with cholinergic properties” that may also help to ameliorate the cognitive deficits of Alzheimer’s disease. The results showed that administration of S. lavandulaefolia consistently improved the ‘Speed of Memory’ factor, enhanced mood, and increased self-rated alertness, calmness and contentedness.[3]

Therefore, studies show that adding Spanish or common sage to your daily fragrance enjoyments is likely to make you smarter.

Salvia Officinalis is also called kitchen sage because it’s the most common species used for cooking. When you buy sage from the spice aisle, it’s probably this one.

Sage is famously used to season roast chicken. Make slits in the meat and add sage before cooking. Also add copious amounts of fresh garlic along with your favorite seasonings, or test the flavor out by using the leaves to make a tea and sweetening to taste.

Cooking with the leaves whole or ground is a nice way to get some sage in your life, and you will receive some of its benefits this way, but the most potent vehicle is the essential oil. Make sure it’s 100% natural and pure, and that the species in the ingredients is the one you seek.

Give your brain a refreshing wake up call by inhaling slowly and deeply right from the bottle, or diffuse. Sage oil can be irritating to skin if applied directly, so dilute it in your favorite carrier oil to apply to the skin as a fragrance oil. Test and see what blends you can create. You might like sage along with citrus EOs such as lime and sweet orange, also awakening and purifying aromas.

Get creative! Boost your shampoo adding a drop (or so) of sage as a clarifier, or to your house cleaning solution as a purifier. The fragrance will enter into your body and tickle your brain whether inhaled, ingested or applied to the skin.

If ingesting the oil, use as directed and under supervision of a professional healthcare provider. Sage is available in most health food stores as tablets, capsules, tinctures and teas.

Again, the essential oil MUST be diluted. Sage is powerful. Treat it with respect.

Enjoy the diffused fragrance to your heart’s content. For a massage oil, add to carrier oil according to your taste, roughly in a 1%, 2% or 3% dilution.

Because of insufficient research, women who are pregnant or breastfeeding should avoid the use of sage as a supplement. There are no known appropriate doses for children, although kids have been eating sage as a spice in meals for centuries.