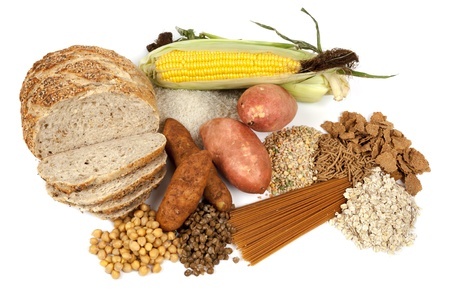 Despite all the hate that carbs get, there are benefits to eating the right kind of carbs. Learn more about the good carbs your body needs at BeWellBuzz.

An August 2015 study suggests carbs have played a much bigger role in the evolution of the human brain than originally suspected. Up until now most of our advancement has been attributed to the proteins gathered through (finally) cooking our meat, but any endurance athlete knows that carbs are the fuel the body needs to power through. As it turns out, ancient man relied on them as well for brain health and growth!

Why Carbs Are Important

When thought of this way, carb intake means more than simply getting all we can. Instead of simply focusing on the foods that give the most carbs, we need to be mindful of the types of carbs we’re eating to gain the maximum benefit for our bodies.

What Makes a Good Carb?

Most carbs come in the form of:

What’s important to note is some are healthier than others. For example, although you can load up on carbs from sugary sodas or pastries, these can contribute to unhealthy weight gain, diabetes and heart disease. Even potatoes, while starchy and carb -filled, should be avoided.

What you want are healthy carbs that come in as natural a form as possible, unprocessed and whole, such as vegetables, fruits, whole grains and beans.

Here’s a list of some of the best and healthiest sources.

Nature’s prepackaged snack, bananas are filled with carbs (more than 30 grams for a big one) as well as potassium and vitamin B6. Paired with some protein, they help promote muscle repair.

Any athlete swears by oatmeal, and for good reason. High in complex carbohydrates, it’s easy to make and filling. The fiber helps keep you feeling full. To top it off, oatmeal has a good amount of protein to assist in muscle recovery.

This is one of the best sources of carbohydrates, with a single cup containing up to 45 grams. The benefits of whole grain over refined rice, such as their white counterpart, are many. The vitamins, minerals and fiber they provide, in addition to the carbohydrates, keeps your body healthy while fueling it up.

Anyone picturing a marathon runner getting ready for an event pictures the person bent over a massive bowl of pasta, wolfing it down like there’s no tomorrow. There’s good reason for this! Pasta has long been known to be a great source of carbohydrates. However, regular pasta has been processed and many of its nutrients removed. Whole wheat is far healthier. Providing the energy you need, the whole wheat also has dietary fiber. When paired with a protein to help with portion control and some veggies for added nutrients, it’s all you need to be ready to go.

Beans are a low-glycemic food, meaning that instead of the carbs burning quickly, they process slowly in your system. This gives you a steady boost of energy over a long period of time, instead of the sugar-rush and then inevitable crash that comes from simple sugary carbs.

Referred to as a whole grain, quinoa is actually a pseudo-cereal, and an incredibly healthy one at that. It has all that healthy fiber to help you feel full and is considered a “complete protein”, which means it has all nine amino acids the body needs. The list of nutrients it contains is a long one. Endurance athlete or not, quinoa is one of those foods everyone should eat more of for all of the benefits it provides.

When considering what to eat, remember that complex carbs from natural sources are best. They burn the longest; provide a smooth, natural increase in blood glucose and bring along extra nutrition the body needs.

Stay safe out there!