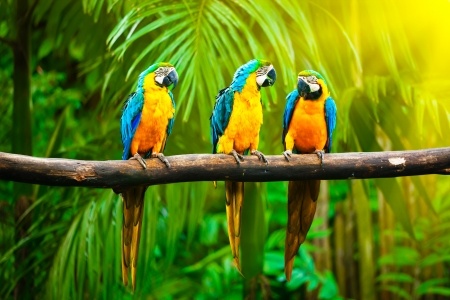 A couple of years ago, I was wandering around St. John Pass in Florida with a friend, seeking a restaurant offering a pot of tea. It was a very hot day and my friend was dehydrating.

“Seeking” changed to “hunting,” when I suddenly “smelled a psychic,” and set off sideways, following my instincts; and forgetting about Clare. It’s the kind of things that dogs do when they follow their noses, going this way and that. And this is how I found the sign advertising “Angel Readings” outside a cheerful little cottage surrounded by snowy-white egrets, all basking in its good energy.

A sign in the window advertised the services of a psychic parrot called Elvis, who would pick a card for you for $12. Three days later, I was crossing the threshold to meet with Stephanie, the Angel Card Reader. She was waiting, with Elvis perched on her right arm, and a handful of peanuts in her left hand.

Stephanie looked at Elvis, and then at the peanuts; and Elvis looked at Stephanie. She repeated her suggestion to him, in a tone that brooked no refusal, and, with that, Elvis turned, looked me up and down and slowly drawled the words: “Hellooo Audrey.”<

It didn’t sound at all sincere, but he got the peanuts.

Some years before this, in England, I was sitting in the drawing room of a small hotel where the owner’s parrot had dwelled for many years; as had his family’s aged cat. It was well known to the hotel’s patrons (but not to me, who was making my first visit) that the cat’s mission was to make as many attempts to unsettle the parrot as possible; and the parrot’s to keep its dignity.
It was a classic situation for theatrical sketch comedy.

On this day, I had arranged to meet friends for afternoon tea. I was sitting a little distance away from where the parrot was “lording it” in his cage, but able to see the stealthy approach of a cat that was no longer in the first flush of its youth. Suddenly it jumped on to a table, launching itself onto the cage, but without enough of a hold to sustain its claws. As it slid down the metal, screeching its disappointment, the parrot put its head through the bars and said: “Are you alright?” in a very concerned kind of way.

In St. Andrews, in Scotland, close by where I live nowadays, are many seagulls. They know exactly which direction and from what level to fly alongside the students, grazing along the road back to school, to pluck a chip, or a piece of fish, from the open paper bag. Sometimes, a student will hold the remains of their lunch for the birds to finish “on the wing.”

Once, on a Sunday morning, I watched around twenty young gulls being taught how to wheel and turn on orders from older birds with a distinctly soldiery bearing. After a while, I began recognizing the sounds that caused them to respond to their military drill.

We never should underestimate the intelligence of birds, no “bird-brains” are they.

For the past six years, I’ve been privileged to have house martins nesting in my small courtyard. When they first arrived, they became so tame they (and their parents) would allow me to talk to them. Since then their ancestral memory is not so conducive to conversations but they still return to the original and superbly structured nests under the eaves.

I have a robin living close by my garden who makes it his business to take a dekko at visitors; and blackbirds who “tell” me things I need to know.

I’ve forgotten how many times fledglings have come to sit on my shoulders. However, I never will forget the time on the Island of Skye, where I once lived, when I was sheltering in a doorway from a sudden rainfall and a group of small birds came sheltering between my feet.

That was a magic moment.

In 2010, a declaration was published following a Conference on Consciousness in Human and Non-Human Animals at the University of Cambridge.

“The weight of evidence indicates that humans are not unique in possessing the neurological substrate that generates consciousness, non-human animals, including all mammals, birds and other creatures including octopuses also possess these traits.”

Don’t get me started on horses, dogs and dolphins.