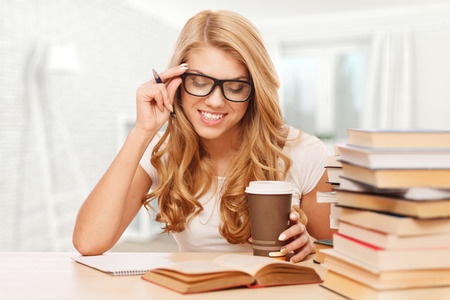 Gleaning knowledge from this world is a complex process that encompasses books to read, films to watch and having a keen eye for observation.

So, aged three, or thereabouts, I set about teaching myself to read. Looking out from my pram I had been fascinated by the big images and words, reproduced on hoardings, advertising various products. One that indelibly stayed in my mind was for a very large fountain pen.

For quite a while, this was my “marker” for the direction in which we were headed. It stood, high on a stretch of wooden planks, as we passed over the railway bridge; and then, the curving road that led to the town where I had been born.

It also led to my thinking, “How did those words get to be there?”

All those ideas, those words thought up in times past, to be discovered, assimilated and used. There were so many books containing so much knowledge that I decided I’d better set to work to learn to read them. I began at the kitchen table, deciphering the labels on jam jars, what was printed on packages and boxes and words printed in copies of “The Radio Times”.

This iconic magazine, with its modern title (it could well have been called “The Wireless Times”) was a “must” for my father, at tuppence a copy, and stored in piles in his garden shed. He was an enthusiast of all things involving communication, beginning when he had made his own version of a crystal radio, commonly known as a “cat’s whisker”, as a young boy. There was one, still, in his shed; a simple contraption made of an antenna wire, a capacitor, a crystal detector, earphones and a coil of copper wire.

At one point, my father attempted to teach me the Morse Code until I lost interest but I took what I needed, to think about. What I really was fascinated by was how this could be connected to the voices I was hearing “inside my head” and in my dream world. Was it possible I had a small piece of crystal inside my brain that They used to keep in touch?

And then there was the dream that continued to bring with it a deep sense of unease.

I was standing with a group of frightened young women on the left hand side of the opening scene, all of us watching the frantic attempts of men, dressed as priests but whose robes were now disheveled and dirty, working with machinery powered by crystals as they tried to avert a major catastrophe. We were in a large chamber with translucent sides, which were under coming under great pressure and threatening to crack.

We were consumed by the knowledge that, once they did, we all would be drowned and that we had been kept behind to raise the dwindling power of the rapidly diminishing crystal.

With an instinctive knowledge that it would be books that would give me the information I needed, I also knew there were intelligent voices to be listened to, on the wireless. I had learned, by watching my father, how to tune into the stations that brought either voices or music and, left to my own devices, I would do much the same.

It was a strange idea for a child but I can remember playing with the idea that wirelesses were like bird cages, containing very small people, whose work it was to inform us; and they must never be disturbed. Sometimes, when it hadn’t been switched on, I would put my ear to the box and listen for the sounds of their conversations. It was all part of trying to understand how Things worked in a Reality I was having to figure out.

My father also was a great one for the cinema and, unlike my mother, he took me to the kinds of films deemed suitable for children, like “Snow White and The Seven Dwarfs,” “Bambi,” “Dumbo” and “Mickey Mouse”.

Actually, I made no value judgments because I was able to take on board the kinds of stories being told in the kinds of films to which my mother took me. The difference was I think she would have preferred to have gone on her own, while my father enjoyed watching me enjoying myself.

But, whatever the film, I got “something” out of it. So, when I was old enough to go on my own, I had accumulated a very respectable amount of knowledge about the history of cinema and the work of many directors and actors.

And it was in this womb-like world that I got some of my biggest thoughts. When I was five, I had a very big one, while watching “The Wizard of Oz.”

The narrow space in the back wall, from where the images were being projected, and high above the audience, had got me thinking. More than this, why was it that the images were upside down, as they passed through the shifting cloud of cigarette smoke, before they made their way to the screen, the right way up?

Suddenly, something was made very clear, as the words formed in my mind: “That’s the way we do it! We think it all up, before we come and then we project it on to the Screen of Life.”

It didn’t answer the question of why some of us were being so unhappy, when it didn’t have to that way, except in the movies. However, on the back of the thought came another; that They were watching Us, living out our Lives, in their own Cinemas in the Sky.

I guess it was about this time I began to put distance from my mother’s behaviour and to see her as more of an actress, playing a part; and being stuck in it. Later, when observing her inexplicable moods, which often involved “falling out” with neighbours, I discovered an intense dislike of hysterical behaviours and noisy outbursts. And, while observing how my loyal father attempted to take my mother’s “side,” came a realisation of how good people can get trapped by wrongful perceptions. Because, from my small perch, I could see my mother’s responses were not always based on reality.

One of the earliest poems my father taught me was about a wise old owl, who sat in an oak tree:
“The more he saw, the less he spoke,
The less he spoke, the more he heard.
Why can’t we be more like that wise old bird?”
That’s a big question.