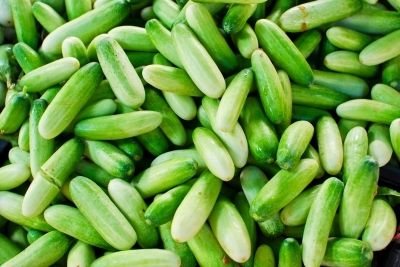 The cucumber is usually a bullet shaped fruit that is eaten world wide as a vegetable. Cucumbers can actually come in a variety of colors, sizes, shapes and textures. They can be found in white, yellow, and even orange-colors but are typically a grassy green color that resemble a pickle in texture and sometimes taste. The cucumber belongs to the botanic family Cucurbitaceae like its relatives the squashes, melons and gourds. The cucurbitaceae family also includes such foods as pumpkins, and Luffas, also spelled Loofas. A fully ripened Loofa is rather fibrous and thus has become the source of the loofa scrubbing sponge used in kitchens and showers the world over. Like the watermelon, cucumbers are mostly comprised of water and therefore are a perfect snack to hydrate the body inside and out. They tend to be very crunchy and juicy and the seeds give it a refreshing taste. Cucumbers can be eaten raw in many tasty salad or sandwich recipes, added to juices or smoothies, or simply on their own for a nutritious snack that gets more vitamins into your system!

Good Source of Vitamins A & K

The Cucumber is a good source of vitamin A which works hard to battle the free radicals in your body causing various illnesses such as colds and even cancer. Your skin and mucous membranes use vitamin A to stop viruses and bacteria from entering the body. Vitamin A is also effective at regulating the immune system keeping skin infections at bay. Vitamin K in the body works on reducing blood clots and building good bone structure by preventing the buildup of calcium inside the tissues where is does not belong. In addition its been noted by the Worlds Healthiest Foods that it acts as an anti-inflammatory helping to prevent atherosclerosis, stroke and cardiovascular disease.

Good Source of Vitamin C and other Vitamins

Vitamin C acts as an antioxidant in the body protecting your skin cells from free radical damage that affects all of us because we are exposed to air pollution, ultraviolet light from the sun, first and second hand cigarette smoke and more. Vitamin C also boosts the production of two of the skin’s most important proteins, collagen and elastin. Other vitamins found in cucumbers include thiamin, riboflavin, niacin, vitamin B6, folate, and pantothenic acid making cucumbers a well rounded choice for a thirst quenching snack full of nutritional benefits!

Cucumbers are a high source of fiber which helps regulate your digestive system and often acts like a laxative. The fiber also works to lower the blood sugar levels giving you energy for the entire day.

According to Wikipedia, Lignans are a group of chemical compounds that are found in a wide variety of plants. Lignans happen to be a type of phytoestrogen which is an estrogen-like chemical that also acts as an antioxidant. Cucumbers contain the 3 lignans including lariciresinol, pinoresinol, and secoisolariciresinol. These lignans have several health promoting properties including a connection with reduced risk of cardiovascular disease and several types of cancers ranging from breast, uterine, and ovarian to prostate cancers.

The cucumber is a good source of zeaxanthin which is an antioxidant that is only present in some vegetables and helps protect bodily tissues. Caffeic acid is another a potent antioxidant present in cucumbers that helps to ward off wrinkles as well sun damage. This explains why we often see images of women at the spa with cucumber slices on their eyes.

Cucumbers contain virtually no fat and make a perfect diet food eaten on its own or when mixed in a salad or a smoothie.

Cucumbers may be one of the few fruits you can eat when on a low carbohydrate diet.

Instead of reaching for antacids found over the counter and comprised of mostly unnatural ingredients, Cucumbers often work to sooth this irritating feeling while providing other nutritional benefits that synthetic solutions fall short on.

Similar to carrots and apples, cucumbers have tooth cleansing qualities that assist in removing plaque and combating the acids that cause cavities. Children consuming cucumbers will counteract the effects of candy and junk food on their teeth while lessening their chances of tooth decay and tooth loss as they become adults.

Helps Reduce Puffiness around the Eyes

Because cucumbers tend to be naturally anti-inflammatory, naturally hydrating and soothing, they work wonders on puffy and dried eyes.

Incorporate Cucumbers into Your Diet

Go Greek! Make some Tzatziki, a Greek delicacy salad made with cucumbers that are cut in cubes and mixed in yoghurt with the addition of mint and lemon juice. Its a fresh appetizer that includes calcium and vitamins to your plate

Go Indian! Prepare a sautee of cucumber with curry: This is a traditional Indian recipe where the slices of cucumber are cooked in a stove with curry. This is a perfect side dish for a light meal of fish your poultry of choice.

Go for a green detox juice! Consuming cucumbers helps cleanse the digestive system of toxins. Combine cucumbers, celery, ginger, dandelion and mint leaves in a juicer and bottoms up!