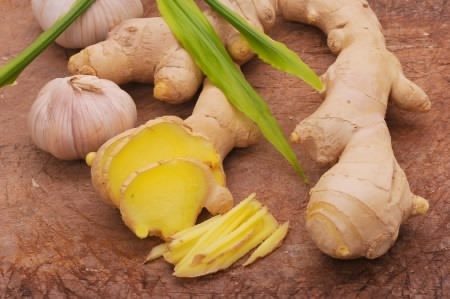 Ginger root, or Zingiber officinale as it’s known botanically, is part of the Zingiberaceae family and is native to the Asian continent. It also is cultivated in Africa, Jamaica and the West Indies. Ginger is a perennial herb that grows underground but also springs up a yellowish flowering stalk that dies annually. Growing in a tuberous fashion that looks like a claw of some sort, the root is a spice that can be used fresh, dried or powdered, but also as an oil or juice. The taste of fresh ginger root is moderately spicy and adds a zing to recipes in which it is used. Add it to Asian stir fry dishes, soups, sauces, marinades or tea and juice to get the most out of your meals—I do!

Not a favorite for many because of its peppery flavor, ginger root is more than just a seasonal spice used in pumpkin pie. Ginger has been used for centuries as an herbal remedy, aiding in the body’s defense from the common cold to more serious illnesses. This root plant has tremendous healing powers and its therapeutic potential is worth knowing about. From increasing your metabolism to promoting energy circulation and detox, consuming ginger goes a long way towards increasing your chances of feeling good and staying healthy. In Ayurvedic medicine practices, ginger happens to be considered as one of the most significant healing plants. Using ginger in your cooking will provide a good source of vitamin C, magnesium, potassium, copper and manganese for your body. Vitamin C is a powerful antioxidant, having loads of benefits in its own right and being essential for optimum health.

Ginger is antibacterial, antiviral, antioxidant and has anti-parasitic properties. It’s the volatile oils and phenol compounds that give ginger its medicinal strength. In China, ginger has been used for more than 2,000 years as an aid for digestion, nausea and upset stomach because it calms the intestinal tract. Ginger typically is used to support digestion but it also is known to treat gas, morning sickness, diarrhea and more. My family has experienced these benefits, which is why I am excited to share this knowledge with you. Ginger can be helpful for upper respiratory tract infections, coughs and bronchitis due to its antiseptic properties. It will work wonders to clear up the body’s circulatory vascular channels, including sinuses. Ginger helps flush out waste and promotes detoxification. Other uses include pain relief from muscle soreness, arthritis, headaches and menstrual cramps. I personally have used this remedy to reduce difficult menstrual cramps and to calm stomach cramps–it works!

According to Mercola.com, some of ginger’s health benefits range from removing mucus from the throat and lungs to soothing and healing cough, bronchitis, flu, asthma and even breathlessness. This information comes to my rescue often during winter, when phlegm increases due to inclement weather and low immunity.

Inflammation in the colon can lead to colon cancer. However, a study published in “Cancer Prevention Research” magazine revealed that ginger, consumed regularly, reduces colon inflammation. This kind of information is becoming highly sought after as people seek less toxic and less costly methods to prevent cancer.

A University of Georgia study determined ginger, consumed on a daily basis, reduced muscle pain resulting from exercise. I find that using a few drops of ginger oil in the bath is a great technique to alleviate soreness as well.

At the University of Michigan Comprehensive Cancer Center, researchers learned cancer cells died when exposed to a ginger powder solution. The cancer cells either died or digested and attacked themselves. These exciting results were presented in 2006 at the annual meeting of the American Association for Cancer Research. While I’m on the subject of prostate cancer, the National Institute of Health published an abstract report indicating certain dietary phytochemicals found in ginger do offer therapeutic management for some prostate cancers. In in-vitro and in-vivo prostate cancer models, the National Institutes of Health reported growth-inhibiting properties of ginger extract. This is revolutionary information for our society and future generations of cancer sufferers.

Ginger is Excellent Against Migraines

In Iran, a study was published in the journal Phytotherapy Research that showed that ginger is effective in treating migraine symptoms. Sumartriptan typically is prescribed for migraines but ginger’s adverse effects were far fewer than those experienced when taking Sumatriptan. If you suffer from headaches or migraines, which most people do at some point, it may not be a bad idea to steep some ginger root in your tea and drink it throughout the day. This is the easiest and least invasive method to increase your intake of ginger and one that I use daily.

Because ginger is anti-inflammatory, it has become valuable for the relief of pain typically caused by inflammation. A 2013 study where women took three grams of ginger daily revealed they experienced reduced muscle soreness and pain. Try it, it can work for you, too!

In short, ginger is one of the most potent natural disease fighters that can be added to your diet to enhance health and longevity. Consuming ginger in the long term can help you fight the risk of cancer, reduce arthritic pain, boost your metabolism, flush out waste, improve liver function, ease inflammation and more. Why not start using it today?

Do you want to know how to incorporate ginger into your diet? Stay tuned for my next article.

Sources for this article