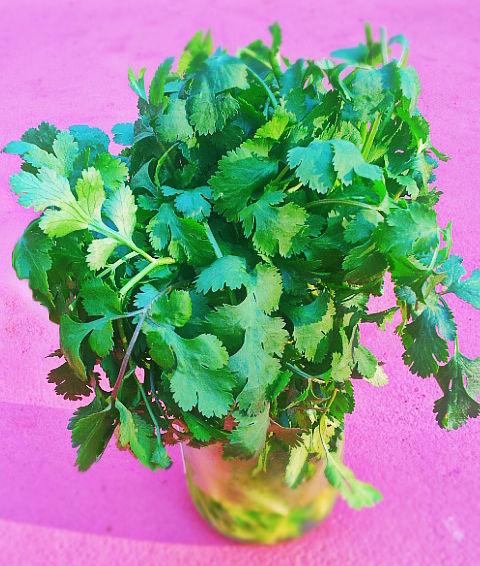 Originally cultivated in china, India and Egypt, Cilantro is commonly known in the Mediterranean as coriander and is renowned for its strong pungent fragrance and frequent and use as an herb, a spice or garnish. Its been said that the Spanish conquistadors are responsible for introducing it to Mexico and Peru where it became an essential part of Latin cuisine. Cilantro then became a common flavoring in Asian, Caribbean, Middle Eastern and Indian foods as well. Belonging to Apiaceae family, cilantro is botanically known as Coriandrum sativum. The plant and leaves are called cilantro in the Americas, while the seeds (used as a spice) are called coriander. To confuse matters even further, the leaves are often referred to as Mexican parsley, Chinese parsley, and/or coriander. The nice thing about this herb is that you can really get your moneys worth since not only are the leaves refreshingly edible, but so are the stems, and even the root!

Offering many health protective benefits, cilantro is especially effective as an anti bacterial and anti and microbial due to a compound called dodecenal that may be as powerful as some antibiotic drugs according to a chemist from the University of Berkeley who noted that dodecenal is a potent antibiotic that helps fight infection and eradicate harmful microbes from the body. Livestrong.com mentions studies that indicate this compound prevents food poisoning and kills salmonella bacteria.

Cilantro also possesses tremendous anti-inflammatory properties. Mike Adams of Natural News.com informs that if you are irritated by any chronic inflammatory diseases then there is a great possibility that cilantro may be a perfect natural solution for you. Some of these chronic inflammatory diseases typically manifest themselves as autoimmune disorders, irritable bowel syndrome, arthritis, heart disease, brain fog, fatigue and more. Volatile oils terpineo and terpinolene found in Cilantro work as an analgesic and thus help reduce pain. Other oils found in Cilantro include borneol, linalool, cineole, cymene, dipentene, phellandrene, and pinene –all of which attribute to its highly medicinal properties. Borneol for one has a wide range of uses. It assists the digestive system by stimulating the production of gastric juices; improves circulation; treats bronchitis, coughs and colds; can relieve pain caused by rheumatic diseases and sprains; reduces swelling; relives stress; and can be used as a tonic to promote relaxation and reduce exhaustion. Linalool is used to make cosmetics and fragrances and is used in many insect repellants. Cineole is used in flavoring, perfumery, and medicine chiefly as an expectorant and may be the reason why cilantro is useful in the treatment of colds and coughs. Also a noted benefit is the deodorant properties of Cilantro, possibly due to the Cineoles potent fragrance which helps combat body odor and bad breath.

The many phytonutrient substances found in Cilantro are ideal for relief from other ailments too! Cilantro can relieve aches, colds, diarrhea, digestive problems, infections, flatulence, mental fatigue, migraine, muscular aches and pains, nausea, oily skin, and even stomach cramps. The phytonutrients, flavonoids and phenolic compounds found in cilantro were used by ancient cultures to prevent indigestion and other digestive disorders.

Dr. James A. Duke, Ph.D., the author of the CRC handbook of medicinal herbs concludes that making a tea from the cilantro leaf is effective in soothing most forms of stomach discomfort including gas. Gas can be dangerously painful in the intestines stomach and chest as it rises up the body but it is often mistaken for something else. The use of cilantro in the diet can be greatly beneficial for flatulence, IBS and digestive disorders because it gives gas an outlet and relaxes the sphincters in the stomach and intestinal tract.

Adding fresh cilantro to your diet is also an excellent way to help cleanse your body of toxic heavy metals like mercury, arsenic, and lead, which accumulate in tissue and elsewhere in your body as a result of repeated environmental and dietary exposure including simply drinking tap water! Dr John Barron in his book Lessons from the Miracle Doctors discloses that fresh cilantro may be extremely effective in helping flush heavy metals out of the blood by changing the electric charge on intra-cellular heavy metal deposits in the body to a neutral state. This then helps relax their tight bond on body tissue and frees them up to be flushed from the body.

Cilantro does not contain any cholesterol making it easy to add this herb to your favorite dishes, salads, and smoothies. It is rich in the antioxidants, essential oils, vitamins, and dietary fiber that will help reduce LDL or “bad cholesterol” while increasing HDL the “good cholesterol” levels.
According to the Worlds Healthiest Foods, when offered to rats that were fed a high-fat, high-cholesterol diet, coriander lowered the levels of total LDL while increasing levels of HDL. If this study is any indication of how it will affect humans, Viva la coriander/cilantro! Go and eat it in droves if you suffer from high cholesterol or would like to keep yours in check!

The leaves and stem tips are also rich in numerous anti-oxidant polyphenolic flavonoids such as quercetin, kaempferol, rhamnetin and epigenin. Quercetin is an antioxidant that travels through the body and removes harmful free radicals. According to Natural News.com, it has been linked to supporting the immune system, clearing excess congestion, supporting bone health and may help fight mild allergy problems. Kaempferol is an effective antioxidant that helps to prevent oxidative damage of our cells, lipids and DNA. It is also highly anti bacterial.

The herb is a good source of minerals like potassium, calcium, manganese, iron, and magnesium. Potassium is an important component of cell and body fluids that helps control heart rate and blood pressure. Iron is essential for red blood cell production. Manganese is used by the body as a co-factor for the antioxidant enzyme, superoxide dismutase.

Rich in Important Vitamins A, B, C, K

Cilantro is found to be high in folic-acid, riboflavin (Vitamin B-2), niacin (Vitamin B), vitamin A, (beta carotene), and vitamin-C. Not surprisingly, all of these vitamins are essential for optimum health.

Vitamin-A, an important fat soluble vitamin and anti-oxidant, is also required for maintaining healthy mucus membranes and skin and is also essential for vision. Consumption of natural foods rich in vitamin-A and flavonoids (carotenes) help the body protect itself from lung and oral cavity cancers.

Niacin works to protect your heart by lowering the blood levels of LDL. Your digestive system, nervous system and brain need niacin to function. It also helps your body make new DNA and regulates insulin use to control blood sugar levels. In addition, niacin is helpful to process fats.

Vitamin-C is a powerful natural antioxidant having loads of benefits in its own right.

Cilantro is proven to be one of the richest herbal sources for vitamin K. Vitamin-K which may play a part in bone mass building by promoting osteotrophic activity in the bones. It has also established a role in the treatment of Alzheimer’s disease which has been noted by Dr. Garland as calcification of the brain. He states that the above emerge as a result of vitamin K.

How to Incorporate Cilantro into Your Diet

Use this herb in the preparation of soups, sauces and salsa.

Go South West! Try it as a garnish on Black Bean Soup. Its very filling and easy to make. You will need diced carrots, diced red peppers and tomatoes, pre-cooked black beans, minced garlic, some chili powder, paprika, cumin, salt, pepper, lime juice to taste and chopped cilantro. You can also add chicken to this soup if you like. Prepare by saut訮g the veggies, add the beans, spices, salt and pepper, add water and bring to a boil. When ready to serve, top with fresh chopped cilantro, yum!

Make a mango cilantro salsa for your salmon and give it a yummy sweet flavor. Use a mango, scallion, diced red pepper, jalapeno, chopped cilantro, minced garlic, lime juice, salt and olive oil. Toss the ingredients in a bowl and chill before serving as an accompaniment to salmon. This salsa also works well with grilled meat or chicken.

You can then add this pesto to pasta, use it in sandwiches or as a marinade to fish and poultry dishes.

Freshly chopped cilantro leaves are a great addition to any salad or smoothie! Just grab a bunch and top your salad or add to your favorite fruit smoothie. It goes exceptionally well with tropical flavored smoothies that include mango, pineapple, kiwi and pears as ingredients. Blend one up and enjoy!