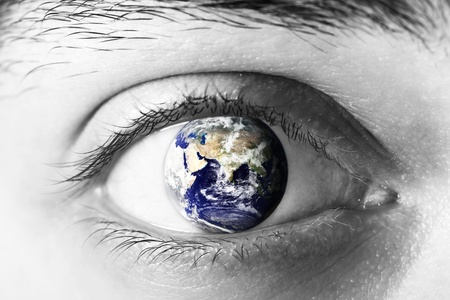 I heard it said once that there is no such thing as an original painting! The reasoning was, “Unless you see it inside your mind first, you can’t paint it.”

Some people may debate this as a trivial detail in the grander scheme of things, but it really is true. It is the foundation for the grander scheme of things. Vision — seeing with the mind’s eye that which isn’t a reality as a reality — is what call faith or belief. It is said you can ‘trick’ yourself into positive reality by using things such as affirmations and visualizing, or “fake it ’til you make it.” The doubters call it lying to yourself and fancy technology “hocus-pocus” to bring stuff about, the “law of attraction stuff.”

I have experienced ‘vision’ many times in my own life: seeing things as they ought to be, not as they were. Once I was visualizing my cells as being healthy when, medically speaking, they weren’t. Another time I was visualizing my son being well and totally healed after that car crash. Yet another time I was visualizing success in my business when it wasn’t being successful. Yet again I was seeing myself as a public speaker when I wasn’t at all. I was believing it was possible to write “Why Me” when I had no experience in writing or distribution at all.

However, I do know positive thinking and achieving is hard if you’re forcing yourself to do something you don’t believe in. It is difficult to see yourself being something or being someone that you know you’re not. If you can’t see yourself doing it, you won’t do it!

So how do you get this belief – this vision? There is a verse in the Bible that says “faith comes by hearing” — by listening to other people’s testimony of what they have done. My belief is “possible in the world, possible for me”. I just have to find someone who has done what I want to do and learn from them how they did it. I believe with discipline, focus, persistence and resilience impossible things can be done if we have the right attitude. “I’m possible” instead of impossible.

I also firmly believe that, without getting your head in order first, you will be destined to fail, whatever you choose to do. This may seem a little harsh to you, but I’ve spent years looking at why some people succeed whilst others fail and this is THE main reason!

Of course, once you understand this (as all successful people do) then it’s another thing to actually make the necessary changes in your thinking. It’s especially difficult when you’re always being told by the “experts” that something is not possible, such as being told you have six weeks to live. That prognosis has killed many a patient who didn’t need to die simply because they believed in the person who declared it.

Which is why I am here. I know many wealthy and successful people well. I also know many poor and miserable people, too! And…I also know what it takes to get from one to the other. (I’ve done it myself a number of times for starters!). As Napoleon Hill says in “Think & Grow Rich”: “Know exactly what you want and why you want it, see it in your mind as an accomplished fact, believe as if it is a done deal. Create a plan and get some mentors and get going.” When you believe you are well, you don’t talk about ‘my cancer’ — you talk about your future plans.