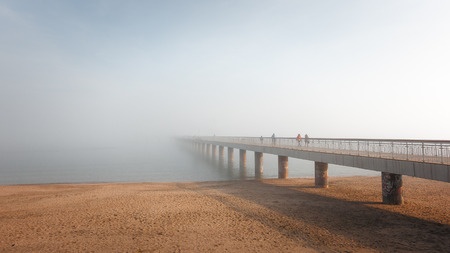 Build a bridge for that special someone to cross over into your heart and to express things that have been hidden too long.
On the last day, the men and women went their separate ways. We sat in groups and spoke honestly with each other and, for the most part, celebrated being women. Better, we began to celebrate being who we were.
And, in the evening, after a relaxing afternoon, we came together in a transformed Universal Hall. It was a staggeringly beautiful sight, and there was music playing. The set designers had created two stages divided by an artificial river and a bridge. Among the plants someone had put rows of small candles and the lights had been dimmed.
The men sat on one side of the river and the women on the other and, for a while, we just looked at each other.
They looked so good, so masculine, so wholesome and they were smiling.
Someone said we were welcome to go to the bridge, to speak from our hearts, to ask the question, to dare to express something that had been hidden for too long. For a while we just looked at each other. They looked so good, so willing to listen and then a man got up and said his piece. Then another, and another, until a woman went to the river, to speak her truth.
I had begun to shake, as I always do when I am summoning up the courage to speak my truth. The man who should have been listening would not hear my words and, now, he was unworthy to hear them. However, I found the will to go to the river to say them anyway.
They listened.
I said: “All you have to do is to build us a bridge and we will walk over it.”
A long time ago, I had written a poem about bridges and the trust it took to walk over one that had yet to be tested.
I used to want to build a bridge,
To walk into your mind.
I get lonely on my side.
I think so differently from you,
Hoping to come to the same conclusions.
But it seems I build bridges differently
So my alien architecture
Offends your craftsman’s eye
And you won’t cross my bridge
For fear of falling.
I wrote the poem for my husband in a time of hoping against hope. He wasn’t one for poetry. Some readers said we should have gone our separate ways at least three points in our lives but it was always a relationship that would bear late fruit, even though some of the first ones were bitter. I always knew that, otherwise I would have walked away.
All we needed to do was to build a bridge, and we did.