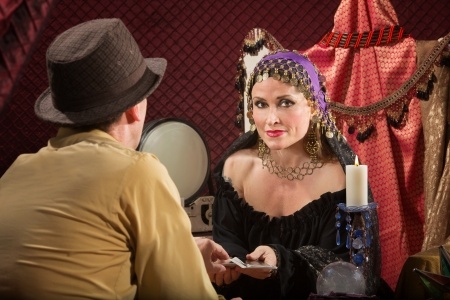 The Gypsy folk used to come to Kent on hop-picking expeditions and, when my mother was feeling well, she would go working in the fields with them. Perhaps this is when “something” within me stirred and I thought I’d like to work on a farm? This is the mother I prefer to remember because, when she changed, I didn’t much like her.

Actually, I felt more at home with the Gypsy folks and would have liked to have run off with them, just like some did in those old tales. I have a feeling one of their own kind might well have chosen to marry out of her tribe, so I just might carry a small link to that bloodline.

Anyway, whenever I’ve gone through what we euphemistically call “challenging times,” they‘ve magically appeared to give me good advice. I mean, lots of times.

They used to come to our back door, these Gypsy women, carrying armfuls of painted chrysanthemums carved out of branches, lace handkerchiefs and their fortune telling cards. They also read palms and my mother had sampled all of their offerings, until she fixed on the thought that Nothing Good ever was going to happen. This was rather upsetting, because she had a good husband, and Me!

She’d been jilted by a “rotter,” (a black sheep in his family) after she’d followed him to Australia, at the age of eighteen; but she stayed on for seven more years.

When I rewrote my family history, I used to imagine she had met up with some Aboriginal healers and stayed with them. That would have sorted her out. Except, I wouldn’t have been born; and I quite liked being Me, when I was left to my own devices.

Anyway, she hadn’t. And she didn’t marry any of the other men who had taken a fancy to her. Once, she had said their legs were too thin, all of them. I think I’ve developed that particular dislike. Instead, she married my father, who didn’t live up to her expectations, being working class. There was a posh streak in her background, although that didn’t do her any good either. I didn’t inherit that bit, because I do think working with one’s hands is a good thing.

What I do not like is opinions based on narrow-mindedness and bigotry and ignorance. And I do agree with that ancient rabbi who said, “Do not do unto others that which is hateful to you.”

I also agree with Doctor Zhivago, who said something along the lines of, “If, day after day, you keep on not speaking your truth, and keep company with unhappy thoughts, of course you are going to be ill.”

That is what happened to my mother, so even the Gypsy women got fed up.

Fortunately, my grandmother was a different kettle of fish. And it just might have been her mother who had run off with someone who wasn’t a travelling man?

Strangely, her family had lived near a Gypsy settlement that had been there for so many years that it was marked on the map.

It was my grandmother who one day took me between her knees and said, “What are we going to make of you?”

And who had given me a dictionary for my fifth birthday?

But this isn’t telling you about the day the Gypsy woman whom I liked the best called–just as I was in the middle of a very big whoop of a cough. She told my mother about The Snails.

Most of us children under five on the estate had whooping cough. When we all coughed together it sounded like the massed cries of strange birds, while all of the mothers kept thinking up different ways of alleviation.

On the day the Gypsy called, I was feeling very sorry for myself. She had given me one of her “looks” before telling my mother about something in a low voice.

After she left (but not before she had given me another “think on” glance, my mother said, “The Gypsy says you must go into the garden and find a very large snail.”

I knew exactly where they lived; close by the fence near my Dad‘s cabbage patch.

When I came back, holding it in the palm of my hand, my mother said, “The Gypsy said you must find a saucer and sprinkle sugar around the edge. And then you must put the snail on the trail.” And so I did, because that’s what the Gypsy had said to do.

I sat watching it slide in an almost regal manner (round and around) until it was being followed by a circle of slime. Then my mother said, “The Gypsy says you must get a spoon and eat up all the syrup.” And this is what I did, because I loved that Gypsy woman. And this is when my cough began to fade and I recovered more quickly than any of the other children.

Many years later, I told this story to the well-known herbalist Jan de Vries, who just had delivered a talk on Village Remedies.

He said, “You were a very brave little girl.” Isn’t it strange how time can slip backwards? For, suddenly, I was that small girl again.

If you go hunting on the Internet, you’ll find the many things Snails can provide as healing medicine, confirmed by considerable research conducted by many medical scientists.

Nowadays, it’s always a good thing to check everything, but I’m so glad I had enough faith to listen to the Gypsy woman.

Both my mother and I knew I never would have taken her word for it, which is rather sad.

I’m thinking, if she’d only taken in the words the Gypsies had said, as well as consulting a dictionary, her life might have been very different.