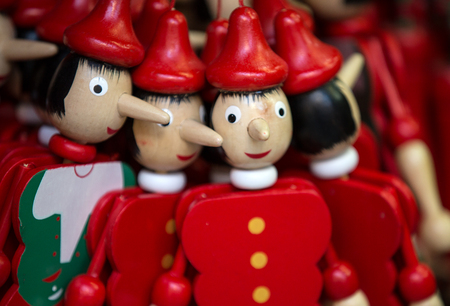 We were taught as children not to tell lies. Should we ever be ‘CAUGHT’ lying Mom would wash our mouth out with soap. I don’t know what the soap was supposed to do, perhaps it was to be a psychological washing of the conscious! So, what meaning do you give to the word “lie”? When is a “lie” a “lie,” and is it okay to tell a “white lie?” What is the difference, really? Lying is bad but white lies are okay? I heard someone say that they “fudged” the answers on an exam. What does that mean? Or when we “pretend not to know,” but we really do? Is that lying?

‘Lie’ is a pretty derogatory word that most people rather would not be associated with and have strong reactions to. We want people to feel that they can believe us. Years ago, my grandson asked me why I coloured my hair and I replied that it made me look younger. His response was he thought ‘pretending to be what you are not’ was a lie! Oops!… What to say?

Isn’t it fascinating that so many of us have different standards for others when all of us ‘lie’ to ourselves in one way or another? People can strongly condemn other people who lie, especially if the “liar” is in a position of leadership. We have one standard for them and another for ourselves. But perhaps these people in leadership see it as “prudent” to lie in some cases when the heat is on. Perhaps they call it a ‘white lie’ or ‘fudging.’ Do all politicians lie? It would seem so. What about all the priests who have sexually assaulted children over the decades and knew that it was ‘wrong,’ but lived a lie that it was okay? Perhaps you also lie. So do I. So do all of us. But, to me, that doesn’t make it okay to lie.

I would like to believe most people don’t go out to intentionally deceive others. But then I remember when our son was studying journalism at university and the students were told to create a “story.” Our son asked, “What if there isn’t anything newsworthy happening at this moment worth reporting?” He was told to create a headline like… “The president denies he is a homosexual.” That can be open to public debate, but the exercise was intended to create the possibility that he is but is denying it.  Of course, if you did ask the president if he was a homosexual he would deny it, so your headline would be true. And you sold your newspapers to the gullible public that would want to know what the article was about.

Sometimes information can be “falsified” because the truth isn’t exciting or interesting, and we call this an exaggeration. Is it? Or is it a lie? Hopefully, people don’t unashamedly make up stuff that isn’t true–but some stories do make you wonder. On a daily basis you and I can be sucked into a “50% off sale.” When I worked in the retail trade, I discovered that “50% off” meant that we doubled the original price so we could give you the discount. People often say and do things that aren’t one hundred percent honest. We can withhold information, such as the garment having been mislabeled, that could explain why it is on sale.

Lying is so easy to do. In the heat of the moment, we say to the policeman who has pulled us over for speeding that we didn’t know we were speeding. But our excuse or justification is simply that we’re not willing to deal with the consequences — a ticket. I lie about it because I am hoping the policeman will be nice and just give me a warning. But the child in the back seat sees the speedometer and interjects that he saw that I was speeding. We don’t want to embarrass ourselves, or upset or offend the child, so we justify the lie, teaching the child it is okay to lie if there is a punishment involved. Oftentimes, we justify our own lying, deciding that it is better for us and other people that we not really tell the truth. We don’t realize that justification also could be a lie because we don’t relate to it as a lie. I heard it said once that an excuse is a skin of a truth stuffed with a lie.

But the real challenge to me is when we aren’t ‘real’ with the people around us about the things that are vital to our relationships. We cover up or deny our feelings. Eventually, things blow up and relationships are broken because we don’t want to tell the other person something in case it hurts their feelings. So we ‘gloss over’ the truth… is that called a lie? Sometimes withholding something is done with every good intentions because we feel speaking the truth may be upsetting for the person to hear. Most misunderstandings in our relationships and the ensuing conflicts don’t initiate from people being totally honest with one another; they come from not being willing to tell the truth in love.

I heard it said that lying is simply a component of our “shadow.” I know it is not something I want to scrutinize in myself, especially when I am reminded that “Thou shalt not bear false witness” is one of The 10 Commandments. Not only do I not want to be reminded about the wrongs of lying, I find it hard to accept and deal with responsibility for my lies.  But once I am able to acknowledge that “Yes, I ,too, am a liar,’ I am able to start recognizing when I lie, and can own the words that I speak. Now I can ask for forgiveness and allow myself to be more real with myself and others. Now I can live in freedom and be open to my authentic self, feeling safe to express my truth and thus create relationships where truth, trust and respect are the norm.

I am not suggesting we get hung up on every word that we speak, evaluating whether it is the truth. But if we always attempt to avoid exaggerating, justifying, or making excuses, and instead be transparent with our feelings, a significant amount of freedom comes into our life and our relationships with others.

For me, the most important person to be truthful with is myself. If I can evaluate my thoughts and actions with integrity and live out this desire to be truthful, then life becomes easier. It is not always easy to acknowledge that we have failed in the quest for honest, transparent living. However, when we are ready to handle things with authenticity we are more empowered than when we sidestep issues, and thus attempt to deceive ourselves and others.

Lying doesn’t make you a “bad” person and not lying does not make you a “good” person. We all are part of the human race and we all are on the same journey of discovering how to live the best, most fulfilled life possible. Acknowledging our lies and being willing to release the necessity to lie can be one of the most cathartic and beneficial ways for us to expand our ability to be real, honest and open in life. When we tap into the power of truthfulness we then understand the famous saying, “the truth will set you free”.