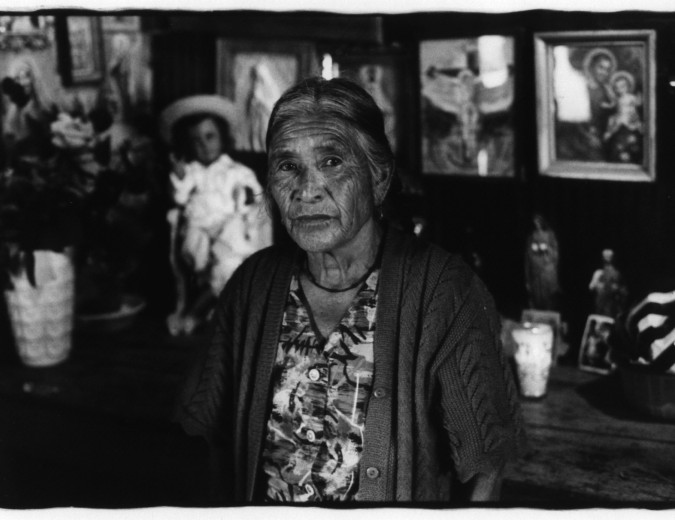 A new film, shot with the support of National Geographic, helps spread the word about the healing mushroom ceremonies of the Mazatec people. This post from Reset.Me unveils the new film ‘Little Saints,’ showcasing the incredible power of psilocybin mushrooms to heal us, physically and spiritually.

Inside a brick house in Oaxaca, Mexico, a wizened indigenous woman stands at a candlelit altar adorned with images of Christ, the Virgin Mary, the Pope and the Santo Niño de Atocha. A small group of Westerners watch raptly as she prays in her native Mazatec tongue:

The shaman at the altar, Natalia Martinez, is the focal point of the hour-and-38-minute-long documentary Little Saints. Shot over the course of three consecutive summers, the film chronicles six Los Angeles residents’ collective journey to the Sierra Mazateca region of Oaxaca to take part in veladas: healing mushroom ceremonies central to the religious tradition of the Mazatec people (“people of the deer”) who inhabit the area.

After Martinez invokes various Catholic figures, each participant eats a large batch of psilocybin mushrooms. Martinez then uses a combination of prayer, talk therapy and visualization to help the Westerners find the sources of their ailments and discomforts, which include asthma, stomach pains, social anxiety, depression and drug addiction.

One of Little Saints’ most poignant scenes finds bodyworker Lorrie Wessel coming to the realization that her social anxiety may not actually be a disorder. Weeping softly, she reveals, “It’s gaining in my awareness that I picked the perfect environment to assist me with my growth and what I wanted to learn, and that nobody’s at fault. And that’s [true] for all of us. The mistakes we made are not really mistakes, because it’s the best we knew at the time.”

In one of the film’s lighter moments, Sergio Diazvelez, a lawyer who has come to Oaxaca in search of relief from depression stemming from a divorce, attempts to recite the Lord’s Prayer at Martinez’ bidding. “Yes, but everything is moving!” he laughingly blurts out.

Director/producer/editor Oliver Quintanilla shot Little Saints with the support of National Geographic’s All Roads Film Project and various contributors. His main reason for making the film was to help spread the word about these mushroom ceremonies to people who might benefit from this form of healing.

If you’ve never heard of it, then you’re going to go through traditional Western medicine without knowing that there might be an alternative that could be more fitting for you,” Quintanilla said to Reset.

“I could have done a narrator type of thing and said it myself, but it wouldn’t be as powerful as if someone who has medical credentials says it,” the director offered. “If they [attest to the curative properties of psychedelics], they can probably change the views of many more people than I could do myself.”

Quintanilla added that people are more likely to have negative experiences if they use mushrooms recreationally as opposed to sacramentally. For this reason, he hopes his film will introduce some viewers to the notion of psychedelics as sacraments. The titleLittle Saints is an extension of this idea: as Catholic priest José Luis Sánchez explains early in the movie, this term is a loose translation of the Mazatec name for the mushrooms. “Little” is a term of respect rather than a diminutive, and the latter half of the name is sometimes interpreted as “sacred things” instead of “saints.”

Quintanilla, who moved to the United States from Mexico when he was in his early 20s, traces his interest in Mazatec shamanism back to 1999, when he took mushrooms for the first time.

“It felt like I went to therapy for a whole year in one single night,” he recalled. “At the time, I considered myself an atheist, [yet] I had some visions about God, our existence and where we come from. It was very spiritual. The next morning, I asked myself, ‘If I am sure that God doesn’t exist, why am I getting all these thoughts? Where do they come from? They cannot come from myself, because I am sure — or at least I tell myself — that God doesn’t exist.’”

His curiosity stoked, Quintanilla went to the public library every day for a week straight in search of knowledge that might help him make sense of his experience. In the process, he became aware of the Mazatec people for the first time. “Even though I was from Mexico, I had never heard about indigenous people using mushrooms for spiritual reasons and for healing,” he said.

In September 1999, two weeks after his first psychedelic experience, Quintanilla journeyed to Oaxaca in the hopes of meeting a healer. While wandering around the town of Huautla de Jiménez, he met a man who brought him to Martinez’ door.

The ensuing experience was, in Quintanilla’s description, “very, very impressive.” Martinez prayed for 15 or 20 minutes before handing the film director 16 fresh mushrooms on a tobacco leaf. Once the psilocybin took hold, Martinez began to ask Quintanilla about his life in Los Angeles. This led to a discussion of the bouts of depression he had recently been experiencing as a result of some substance abuse on his part.

At this point, Martinez asked Quintanilla a question that initially struck him as a non sequitur.

“She said, ‘Why don’t you have a girlfriend?’” he recalled. “‘You’re not ugly. You could find somebody to spend your time with. If you had someone in your life to live for and care for, you wouldn’t be occupying your time going to parties and taking drugs.’” Martinez then prayed for Quintanilla to find a partner.

Within six months of that event, the director had met his life partner, and his drug use had ceased. The following year, he returned to Oaxaca with the woman who was now his wife. Though they had been officially married a few months prior, the couple performed a spiritual wedding ceremony at Martinez’ home.

In reference to the drug abuse that he and Martinez discussed, Quintanilla noted:

“Some people might say, ‘It’s kind of ridiculous that you go and take mushrooms — a drug — to stop doing another drug. But it’s important to differentiate: although a lot of people think of the mushrooms as drugs, within this particular culture, the mushrooms are considered extremely, extremely sacred. It’s amazing that they can be used for addictions, depression or other things that are mainly psychological in nature.”

The morning after Quintanilla’s first velada, he asked Martinez’ permission to make a movie about her shamanic work. She gave me a very stern look, turned around and walked away,” he said.

The filmmaker returned to Oaxaca every year to participate in veladas with Martinez. Each time, he asked the shaman’s permission to film her. After refusing his requests for five years straight, Martinez finally acquiesced.

“I guess it took that long because she took me through my own healing process, and also gaining the trust from someone who was not from there,” Quintanilla ventured. He added that some negative experiences have left the Mazatec people extremely wary of media infiltration.

Asked about Martinez’ use of religious icons in her rituals, Quintanilla said that in his view, the specific imagery that one uses in ceremony is less important than the intention that one holds.

“It doesn’t have to be Catholic,” he opined. “You can replace Jesus with Krishna, Buddha, Muhammad or Moses, and if you believe in them as your guide or savior or as a model or archetype, it could be of benefit.”

Quintanilla, whose Catholic upbringing left him with some misgivings toward that religion, admitted that he was initially put off when Martinez asked him to sit in front of Catholic images and pray during his first velada. He noted, however, that the following morning, “regardless of the Catholicism within the ritual itself, I did recognize the benefits of the whole experience, and I recognized Natalia as having healing powers and knowledge that she gained through many years of experience, from her father and her own culture.”

He also recognized the power of the mushrooms to facilitate the direct experience of a divine presence that transcends human symbolism. As he says in one of Little Saints’opening scenes:

“The important thing is to experience God — not to think of God as some bigger figure that we normally see in [religious] images… something out there. I think we canexperience God. We can experience the universal energy and let that energy flow through us.”

Little Saints is currently screening at select theaters. Watch a trailer for the film below and visit the film’s website for more information.