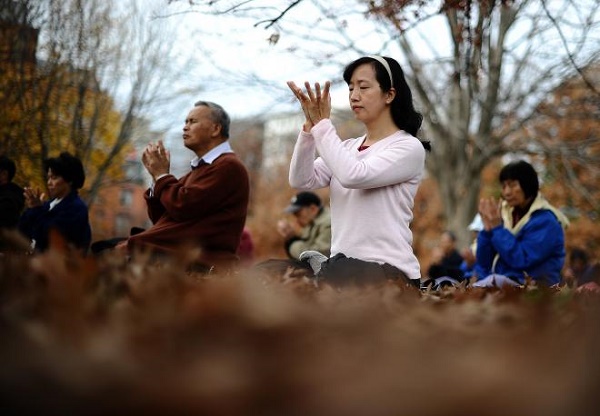 Opioid painkillers are a double-edged sword. On one hand, they reduce chronic pain, which plagues around 100 million Americans. Yet they can also lead to abuse of painkillers, which all too often develops into a heroin addiction.

Researchers from Wake Forest Baptist Medical Center conducted a study that assessed the effectiveness of meditation as a treatment for chronic pain. Not only did they find that meditation significantly reduced the amount of pain people experienced, they also showed that it can do so without help from our body’s pain-blocking process and opioid receptors.

“Our finding was surprising and could be important for the millions of chronic pain sufferers who are seeking a fast-acting, non-opiate-based therapy to alleviate their pain,” said Dr. Fadel Zeidan, assistant professor of neurobiology and anatomy at Wake Forest Baptist Medical Center, in a statement. “Our team has demonstrated across four separate studies that meditation, after a short training period, can reduce experimentally induced pain. And now this study shows that meditation doesn’t work through the body’s opioid system.”

Zeidan and his colleagues recruited 78 healthy volunteers and injected them with either a saline placebo solution or naloxone — a drug sold under the name Narcan, among others, that blocks the pain-reducing effects of opioids and is often used to reverse the effects of a drug overdose. They divided participants into four groups: The first group received naloxone and meditated, the second practiced meditation with no naloxone, the third meditated and got a saline placebo, and the fourth received the placebo and didn’t meditate.

The research team induced pain in each participant with a thermal probe that heated a small area of their skin to 120.2 degrees Fahrenheit. The participants rated their levels of pain using a sliding scale. Participants in the meditation plus naloxone group saw their pain ratings drop by 24 percent compared to their responses before they had any treatment. Pain ratings also reduced by 21 percent among participants who meditated and received the saline injection. On the other hand, participants who did not meditate had their pain ratings increase.

“This study adds to the growing body of evidence that something unique is happening with how meditation reduces pain,” Zeidan added. “These findings are especially significant to those who have built up a tolerance to opiate-based drugs and are looking for a non-addictive way to reduce their pain. At the very least, we believe that meditation could be used in conjunction with other traditional drug therapies to enhance pain relief without it producing the addictive side effects and other consequences that may arise from opiate drugs.”

Zeidan’s team was particularly excited to learn that meditation had reduced pain ratings even in participants who received opioid-blocking naloxone. That suggests that meditation reduced pain by a different pathway than the body’s opioid receptors. Other types of cognitive-based therapies that have shown success with addiction, such as hypnosis, acupuncture, distraction, and even the placebo effect, do so with help from opioid receptors.

Health agencies, including the Food and Drug Administration and the Centers for Disease Control and Prevention, have worked to develop pain reduction therapies that do not increase a person’s risk for drug dependence, especially considering the recent spike in deaths caused by drug overdoses. A research team from Johns Hopkins Bloomberg School recently found that even though the number of people addicted to prescription painkillers has skyrocketed, the number of people seeking treatment has remained the same. While the FDA looks into abuse-deterrent opioid drugs, perhaps the best way to beat an addiction is to start by asking for help.