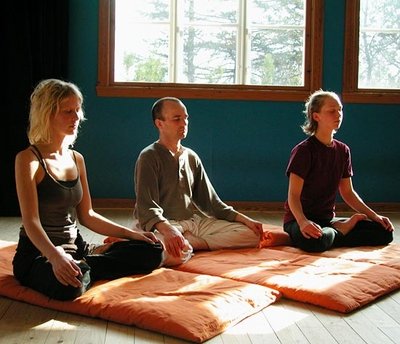 Why does our gut react strongly to our emotional state? Do mindfulness exercises help in mitigating the effects of emotional trauma? This post from Healing From the Freeze answers these questions and more by highlighting the relationship of the vagus nerve to our emotions.

“Now, many people who don’t know a lot about trauma think that trauma has something to do with something that happened to you a long time ago. In fact, the past is the past and the only thing that matters is what happens right now. And what is trauma is the residue that a past event leaves in your own sensory experiences in your body and it’s not that event out there that becomes intolerable but the physical sensations with which you live that become intolerable and you will do anything to make them go away.”

Last week, during a two-day deep cleaning/paint prep binge (see the kitchen ceiling to the right!), I listened to a recorded talk by Bessel van der Kolk given at the May 2011 22nd Annual International Trauma Conference. The title of van der Kolk’s title is a mouthful: “Putting neuroplasticity into clinical practice with neurofeedback: rewiring the brains of children and adults who lack safety, self-regulation, capacity for play, and executive functioning.” The lecture in itself was interesting enough to keep me attentive for its length, but what particularly captured my interest is the manner in which he described the relationship of the vagus nerve to our emotions. 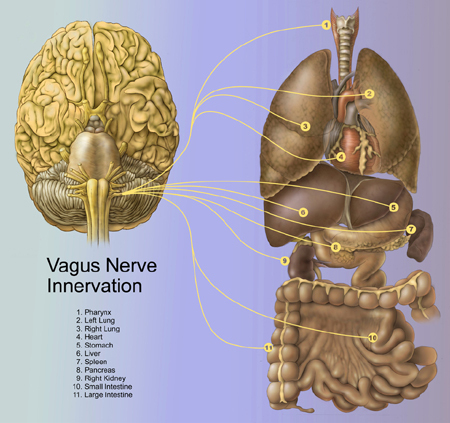 As I remembered from anatomy, the vagus nerve (cranial nerve x) innervates the diaphragm but what failed to register in class is that the vagus nerve also innervates much of our viscera – in fact all of our internal organs with the notable exception of the adrenal glands. It supplies parasympathetic fibers to these organs, meaning that the vagus nerve is a “rest and digest” nerve, not a fight or flight nerve. Van der Kolk quotes from Darwin’s work, “the heart, guts and brain communicate intimately via a nerve” – the pneumogastric or vagus nerve – “the critical nerve in the expression and management of emotions in both humans and animals…. When the mind is strongly excited it instantly affects the state of the viscera.” This is, of course, why our guts react strongly to our emotional state.

Van der Kolk continues with the statement that grabbed me: “what makes life unbearable is not emotions but physical sensations.”

“If these sensations last long enough, your whole brain starts fighting against emotions. And what happens in the long range is that traumatized people who continuously have a state of heartbreak and gut wrenching feelings learn to shut off the sensations in their bodies. And they go through life not feeling their physical presence.”

He then touches on a very important point and one that strongly resonates with me – “it’s a beginning of understanding why traumatized people have such a hard time with mindfulness and why mindfulness in principle doesn’t work for traumatized people because they cannot feel.” Van der Kolk had sent many of his highly traumatized patients to do mindfulness exercises with Jon Kabat-Zinn and found that many of them were returning in a state of upset and agitation.

“As they became silent and started to pay attention to themselves, they get overwhelmed with the physical sensations and they would flee, because being mindful means that you get confronted with your internal world.” In other words, the sensations of the internal world can be so intense that, lacking the tools to work through those sensations, people dissociate during mindfulness exercises. This is not limited to mindfulness exerces but happens in other types of movement, meditative, or healing practices, such as qigong, yoga or massage. 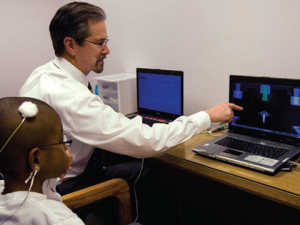 What van der Kolk has found to be a useful tool for moving through this difficulty is neurofeedback, which helps individuals learn to self-regulate by utilizing a feedback tool very similar to a video game that rewards the user for achieving target states such as relaxation, alertness, or focus (for more information on neurofeedback, see http://www.eeginfo.com/). While neurofeedback is a very useful tool and may be a major breakthrough in trauma recovery, it is not always easy to access. Although I am less familiar with them, there are other therapies such as Hakomi method and SomatoEmotional Release that help individuals work with the emotions and physical sensations that often trigger dissociation. A major focus of my studies at this point is to understand better how Chinese/Traditional East Asian medicine works with trauma and the emotions. I suspect that many different modalities can be useful for learning to be present and integrated with our bodies, but also argue that the role of the practitioner and power of intention are key ingredients in the process.

I also believe that bodywork and somatic re-education (acupuncture, massage, tuina, qigong, sotai, et) are essential components to releasing and restoring function to tissues and organs that have lost mobility due to years of fleeing from those physical sensations that van der Kolk describes. We may learn to stay present with our physical sensations, but if the diaphragm is hypertonic (or too tight, just like your shoulders) or the stomach can’t move properly in the abdominal cavity, we will have to work really hard to achieve calm presence when we could instead work to unblock stagnation and release tissues. However, the issue is often truly much more complex than this and healing for many people occurs not by a magic button but through many interwoven processes that may include acupuncture, movement work, EMDR, neurofeedback, nutritional counseling, talk therapy, and meditation or mindfulness practices.

I’ve been unable to get Van der Kolk’s talk out of my mind. Although none of the concepts are unfamiliar to me, there is a sense that I’m missing something or that this visceral-emotional relationship needs to be more closely explored. In Traditional East Asian Medicine (TEAM), the emotions closely affect and are affected by the viscera but I have yet to truly explore the many classical references to this relationship. Spending some time sitting with the classics may help shed some light on how and why acupuncture, moxibustion and other TEAM modalities have been known to treat trauma and shock. A worthwhile topic to explore next.

Source: The vagus nerve, emotions and the difficulty with mindfulness practices | healing from the freeze