A new Parkinson’s disease treatment switches patients from shaking uncontrollably to suddenly being in almost full control of their body. This post from Futurism describes the recently discovered invasive procedure.

Over the weekend I attended a brilliant talk by Dr. Andres Lozano at the University of Toronto. According to Reuters, he is the most cited neurosurgeon on the planet. Dr. Lozano has pioneered many of the techniques used in DBS (deep brain stimulation) and helped transform Toronto Western Hospital into a global hub for neurosurgery. In another age, he would have been revered the world over as a miracle worker for having reanimated thousands of people suffering from a range of cognitive impairments through his surgical techniques.

In DBS a metal rod is inserted into the patient’s brain, on the end of the rod are electrodes that get connected to a battery implanted into their chest cavity. After everything has been put in place, the device is turned on, and an electrical current gets sent that stimulates the neurons in the affected part of the brain. 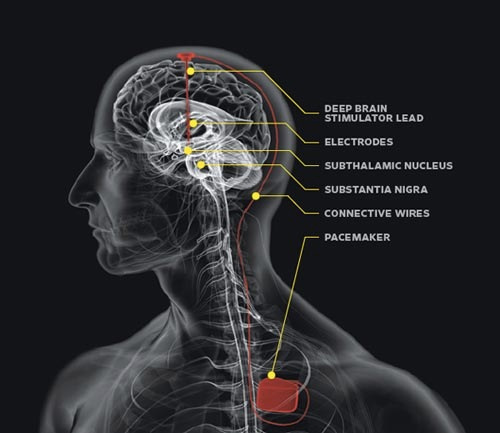 It’s incredible to see the technique in practice. It is most commonly used in Parkinson’s disease patients in cases where traditional medication is no longer effective. At the flick of a switch, patients go from shaking uncontrollably and barely able to move, to suddenly being still, relaxed and in almost full control of their body.

But this is just the beginning of what this technique will be able to do. It has had promising preliminary results in Alzheimer’s disease patients and is being used to treat everything from depression and epilepsy to diabetes and bipolar disorder. Dr. Lozano also accidentally discovered that it can be used to bring back lost memories while he was trying to cure a patient of morbid obesity.

Of course, not everyone is so keen to have a metal spike implanted into their heads no matter what good may come of it. Luckily, a variety of non-invasive techniques are also being developed that might eliminate the need for surgery. One such technique is called TMS (transcranial magnetic stimulation), where high-powered magnets are attached to the outside of a person’s head that send an electromagnetic current down to the target area. Early results have shown the ability to enhance cognition by stimulating neurons in the affected area, but the technique is still in its infancy, so it will be a while before we see people walking down the street with magnets taped to their heads.

Some even imagine a day when we might use genetic engineering to borrow genes from electric eels to allow the brain to produce its own biochemically induced current.

All of this is opening up a new branch of medicine called neuromodulation. The field uses techniques such as DBS, TMS, and others to try and enhance a variety of cognitive abilities. Many in the field believe that one day patients will be able to walk into a clinic, have their brains scanned to determine any deficiencies they have and then have the option to augment those deficiencies.

Neuromodulation also includes the brain’s ability to manipulate objects in space. Already neural prosthesis have been developed that allow people to manipulate robotic arms through their thoughts. It is conceivable that through the coming internet of things you will be able to control many of the objects in your home in the same way.

From there the next step would be a direct connection between your brain and the internet itself, giving you instant access to all of human knowledge, what Elon Musk called a Neural Lace.

Exciting times to say the least.

Source: It’s Nearly Possible to “Shut off” Parkinson’s with a Flick of a Switch