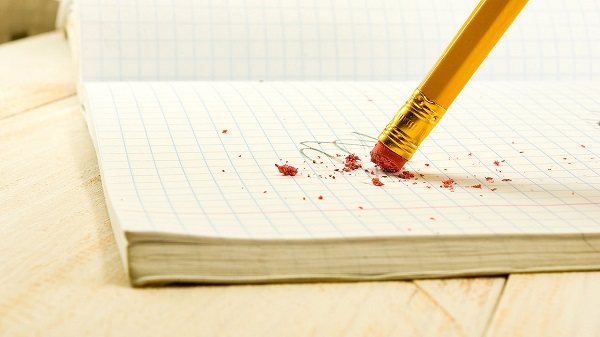 Trying to learn from your mistakes may make you repeat your ‘Oops!’ moments rather than reducing them. This post from FastCompany discusses the findings of a new study that shows that remembering past mistakes can negatively impact your self-control and decision-making.

Remembering the past can negatively impact your self-control and decision-making process. In fact, we often don’t learn from our mistakes—we repeat them if we think about them too much, according to a study published in the Journal of Consumer Psychology.

“Be very careful when you dig up the past,” says Kelly Haws, a professor of marketing at Vanderbilt Owen Graduate School of Management and lead author of the study. “For the most part, it isn’t helpful when you’re facing a current decision, and trying to learn from your mistakes can be a very ineffective way to change future behavior for the better.”

People constantly rewrite the stories they tell themselves about themselves, making recall an unreliable tool for improvement.

Then Haws gave participants a budget and asked them how much they would spend on an item they wanted, such as a pair of shoes, handbag, or video game. The participants who had been asked to recall two instances of success were the only group that spent within their allotted budgets. The other three groups exhibited poorer self-control, all splurging on items they couldn’t afford.

The findings reveal the relationship between recall and self-control, says Haws: “The most surprising result was that searching through the past can negatively affect behavior, even when past examples are positive. People constantly rewrite the stories they tell themselves about themselves, making recall an unreliable tool for improvement.”

Trying to remember 10 examples of good financial decisions might be a struggle, and that can lead someone to doubt their abilities. “You start to use that difficulty you’re having as a cue for who you are and what you’re like,” she says.

Instead of using the past as a tool for improvement, Haws says her study suggests that setting goals for the future is a more productive way to positively change present behavior.

If you want better self-control, look forward and not back, Haws says. Before making a decision, don’t ruminate on past choices.

“Think positively about why you don’t want to eat that cookie, for example,” she says. “Is it because you want to stay slim and healthy, or avoid the sugar energy crash you know is coming? Look forward to the reasons why you’re making tough choices. You don’t buy the $700 boots, because you want to go on that trip to Europe. You study instead of party because you want a good score on the test. It’s generally a more effective way to try to make decisions.”

The only caveat to leaving the past behind is if you can quickly recall successes without putting too much thought into it, says Haws. “People asked to remember two instances of smart spending might think they make great choices, since the recall felt easy,” she says.

Focusing on past mistakes—whether it’s two or 10—can make you feel down. “Several studies have robust findings that if you’re in a bad mood or experiencing negative emotions, it lessens your self control,” says Haws. “You’ll do something that makes you feel good in the short term in an attempt to repair your mood. That’s why they call shopping ‘retail therapy.’”

History Tends To Repeat Itself

While we’ve all been told that it’s important to learn from your mistakes, recalling them makes us internalize them and think of ourselves as people who do negative behaviors, says Haws.

“They become self-fulfilling behaviors,” she says. “You start to tell yourself, ‘That’s what I do, so I might as well do it again.’ It’s better to let that go, and focus on the future.”

via Why You Should Stop Trying to Learn From Your Mistakes