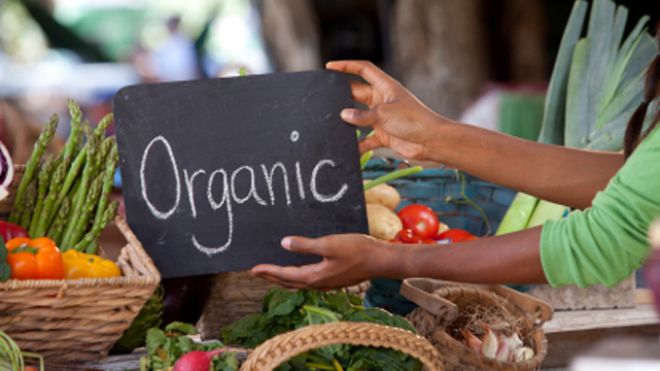 Organic foods are safer to eat, except when the produce has little to no pesticide residue.

The U.S. Department of Agriculture (USDA) tested 3,015 produce samples and found that almost two-thirds contained pesticide residues. The Environmental Working Group (EWG), a non-profit, non-partisan advocacy group for human health and the environment, calculated that USDA tests found a total 165 different pesticides on thousands of fruit and vegetables in the 2014 sampling.

While these findings might increase your desire to always choose organic over conventionally grown produce, in fact, there are many traditionally grown fruits and vegetables that are fine to include in a pesticide-free diet. Of course, there are foods that you should always buy organic, like apples, peaches and nectarines — nearly 100 percent of these fruits have tested positive for at least one pesticide residue. The EWG has produced the Shopper’s Guide to Pesticides in Produce, which includes the “Dirty Dozen” and “Clean Fifteen” lists to help you decide what to buy organic and what’s okay to buy non-organic.

Why do some types of produce have more pesticide than others? Richard Wiles, senior vice president of policy for the Environmental Working Group says, “If you eat something like a pineapple or sweet corn, they have a protection defense because of the outer layer of skin. Not the same for strawberries and berries.” 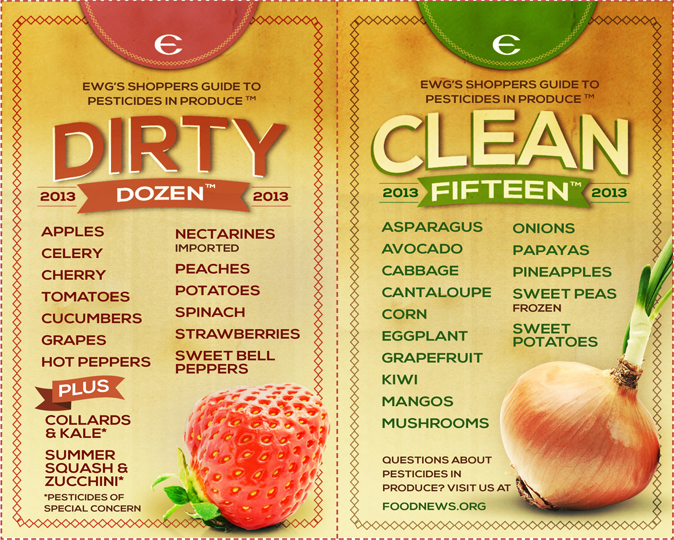 There are many reasons to buy organic: USDA organic certification covers all aspects of a farming operation, from seed sources (the USDA prohibits GMOs in organics, for example) and soil conditions to crop health and pest management. Economics plays a role: While GMO giants like Monsanto have a huge share of the seed market, there are smaller distributors that sell conventional non-GMO seeds, such as corn. For small-scale farmers, this is often more affordable than the GMO variety.

Economics also plays a role on the consumer end: In many parts of the country, such as the so-called “food deserts” in New York City and other urban centers, organic produce is simply not available. In many of these cases, the consumers are from low-income neighborhoods who cannot afford organic produce, even if it were available. Understanding which conventional produce has little to no pesticide residue is important for consumers who want to reduce or eliminate their intake of pesticides and also save money — or who have no access to organic options. In many places, eating organically remains a financial or practical impossibility. But eating less pesticide residue still remains an option.

According to EWG analyzes, asparagus is one of the vegetables that is least likely to contain pesticide residue. This spring vegetable — a cousin of onion and garlic — is a great source of fiber and packed with nutrients like vitamins A, C, E and K, and essential minerals like calcium, magnesium and zinc. It is also a good source of folate, which the body needs to repair DNA and produce healthy blood cells, and chromium, a trace mineral that helps insulin transport glucose from the bloodstream into cells.

A member of the squash family, cantaloupe is a great source of fiber, folate, B vitamins, vitamin C and K, and beta-carotene, an antioxidant that helps keep eyes, skin and hair healthy. It is also high in potassium, which can help to decrease blood pressure. Because of its tough skin, pesticide residue cannot touch the edible fruit inside.

Pesticides can’t get past the thick peel of grapefruit, which is a great source of fiber, folate, potassium and vitamin C, which supports the immune system. It also contains hesperetin, a flavonoid that may aid blood flow to fingers and toes and suppress carcinoid tumors. Pink and red grapefruit also contain lycopene, which fights free radicals that can damage cells.

With very low or no discernible pesticide residue, conventionally-grown cauliflower is safe to buy. Low in fat and carbohydrates, cauliflower is high in dietary fiber, folate, potassium and vitamin C. This cousin of broccoli also contains glucosinolates, sulfur-containing compounds that help the body detoxify. To keep the nutrients in cauliflower intact, steam it instead of boiling it.

Because many of the pesticides used to grow commercial eggplant do not remain on the skin, it is generally a safe choice. It is a good source of fiber, potassium and magnesium. Eggplant also contains anthocyanins, a plant-based compound that may help reduce the risk of cardiovascular disease, cognitive decline and cancer. It is also one of the most potent vegetables for protecting the body against the destructive effects of free radicals.

Pesticides are rarely used on kiwis, so you don’t need to buy them organic. Higher in vitamin C per ounce than most other fruits, eating kiwis may promote healthy skin, reduce blood pressure and help prevent heart disease and stroke. They are a good source for fiber and antioxidants that support the immune system and reduce asthma symptoms.

A member of the squash family, cantaloupe is a great source of of fiber, folate, B vitamins, vitamin C and K, and beta-carotene, an antioxidant that helps keep eyes, skin and hair healthy. It is also high in potassium, which can help to decrease blood pressure. Because of its tough skin, pesticide residue cannot touch the edible fruit inside.

The thick skin of pineapples protects the edible fruit inside from pesticides, so it’s perfectly fine to purchase the non-organic variety. Adults can get more than 100 percent of the recommended intake of vitamin C in just a single cup of fresh pineapple. It’s also a great source of manganese, which is critical to human development, metabolism and the body’s antioxidant system. Pineapple also contains bromelain, a mixture of enzymes that digest protein and reduce inflammation, especially in the nose and sinuses.

According to EWG, onions contain significantly lower pesticide residue than other conventionally-grown produce. Onions are high in vitamin C and are a good source of folate and dietary fiber. They also contain quercetin, a flavonoid that helps delay or slow the oxidative damage to cells and tissue. Quercetin may also help to eliminate free radicals and protect and regenerate vitamin E, a powerful antioxidant.

The thick peel of mangoes prevents pesticides from touching the edible fruit inside, so it is safe to purchase the conventionally-grown version. A cousin of olives and coconuts, mangoes may decrease the risk of macular degeneration and colon cancer. They can also aid in digestion and help keep bones, hair and skin healthy. One cup of diced mango contains 100 precent of the recommended daily intake of vitamin C for adults, as well as substantial amounts of vitamin A and folate.

Because of a low pesticide residue, sweet corn makes EWG’s list of foods that you can buy non-organic. It is one of the best sources of dietary fiber and has good levels of B vitamins and several minerals, including copper, iron, manganese, magnesium and zinc. Corn is also an excellent source of ferulic acid, which may help preventing cancer and inflammation.

EWG ranks papaya as one of the foods lowest in pesticide residue. You can get 80 percent of your daily recommended intake of vitamin C in just half of a small papaya, along with significant amounts of beta-carotene, fiber, folate and potassium. Eating papaya aids digestion, improves blood glucose control in diabetics, lowers blood pressure and may reduce the risk of heart disease, diabetes and cancer.

According to EWG, sweet peas contain very little pesticide residue and it is safe to buy the conventionally-grown variety. Sweet peas contain more fiber than most vegetables: Just one cup contains 14 grams. The Institute of Medicine recommends at least 25 grams of fiber per day for women and 38 grams for men under the age of 50. Peas also contain a polyphenol called coumestrol, which may help prevent stomach cancer.

Compared to other conventionally grown produce, sweet potatoes have very little pesticide residue. They are packed with nutrients such as vitamin A, vitamin B5, B6, thiamin, niacin and riboflavin. In addition, because of their orange color, they are high in carotenoids, which are powerful antioxidants. In addition, sweet potatoes are one of the best ways to get vitamin A: One baked, medium-sized sweet potato contains 438 percent of your daily value of vitamin A. By comparison, a white potato only contains 1 percent.

The mushroom is an interesting vegetable to say the least. A primary fungal decomposer, it is interesting to note that the mushroom that we eat is only the fruit of the plant and that the true body of the plant lays underground in a fine network of mycelium. Mushrooms are grown on a growth substrate and generally, as a rule, pests do not attack mushrooms. They are also considered very clean because of the lack of added chemicals and because the natural growth of mushrooms results in a completely pathogen free vegetable.