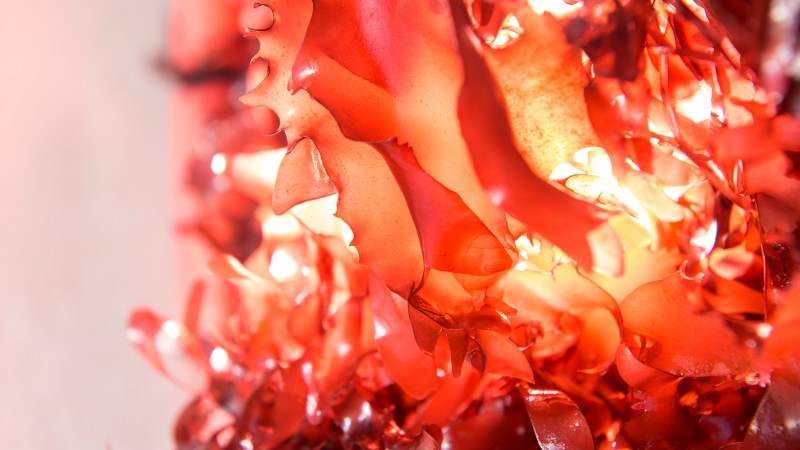 A unique strain of dulse is being grown by OSU researchers – when cooked, the seaweed tastes like bacon! This post from Oregon State University turns the spotlight on the bacon-flavored seaweed that could launch a whole new line of seaweed-based specialty foods.

Oregon State University researchers have patented a new strain of a succulent red marine algae called dulse that grows extraordinarily quickly, is packed full of protein and has an unusual trait when it is cooked.

Dulse (Palmaria sp.) grows in the wild along the Pacific and Atlantic coastlines. It is harvested and usually sold for up to $90 a pound in dried form as a cooking ingredient or nutritional supplement. But researcher Chris Langdon and colleagues at OSU’s Hatfield Marine Science Center have created and patented a new strain of dulse – one he has been growing for the past 15 years.

This strain, which looks like translucent red lettuce, is an excellent source of minerals, vitamins and antioxidants – and it contains up to 16 percent protein in dry weight, Langdon said.

“The original goal was to create a super-food for abalone, because high-quality abalone is treasured, especially in Asia,” Langdon pointed out. “We were able to grow dulse-fed abalone at rates that exceeded those previously reported in the literature. There always has been an interest in growing dulse for human consumption, but we originally focused on using dulse as a food for abalone.”

The technology of growing abalone and dulse has been successfully implemented on a commercial scale by the Big Island Abalone Corporation in Hawaii.

Langdon’s change in perspective about dulse was triggered by a visit by Chuck Toombs, a faculty member in OSU’s College of Business, who stopped by Langdon’s office because he was looking for potential projects for his business students. He saw the dulse growing in bubbling containers outside of Langdon’s office and the proverbial light went on.

“Dulse is a super-food, with twice the nutritional value of kale,” Toombs said. “And OSU had developed this variety that can be farmed, with the potential for a new industry for Oregon.”

Toombs began working with OSU’s Food Innovation Center in Portland, where a product development team created a smorgasbord of new foods with dulse as the main ingredient. Among the most promising were a dulse-based rice cracker and salad dressing.

The research team received a grant from the Oregon Department of Agriculture to explore dulse as a “specialty crop” – the first time a seaweed had made the list, according to Food Innovation Center director Michael Morrissey.

That allowed the team to bring Jason Ball onto the project. The research chef previously had worked with the University of Copenhagen’s Nordic Food Lab, helping chefs there better use local ingredients.

“The Food Innovation Center team was working on creating products from dulse, whereas Jason brings a ‘culinary research’ chef’s perspective,” said Gil Sylvia, director of the Coastal Oregon Marine Experiment Station at OSU’s Hatfield Marine Science Center in Newport. “The point that he and other chefs make is that fresh, high-quality seaweed is hard to get. ‘You bring us the seaweed,’ they say, ‘and we’ll do the creative stuff.’”

Several Portland-area chefs are now testing dulse as a fresh product and many believe it has significant potential in both its raw form and as a food ingredient.

Sylvia, who is a seafood economist, said that although dulse has great potential, no one has yet done a full analysis on whether a commercial operation would be economically feasible. “That fact that it grows rapidly, has high nutritional value, and can be used dried or fresh certainly makes it a strong candidate,” he said.

There are no commercial operations that grow dulse for human consumption in the United States, according to Langdon, who said it has been used as a food in northern Europe for centuries. The dulse sold in U.S. health food and nutrition stores is harvested, and is a different strain from the OSU-patented variety.

“In Europe, they add the powder to smoothies, or add flakes onto food,” Langdon said. “There hasn’t been a lot of interest in using it in a fresh form. But this stuff is pretty amazing. When you fry it, which I have done, it tastes like bacon, not seaweed. And it’s a pretty strong bacon flavor.”

The vegan market alone could comprise a niche.

Langdon, a professor in the Department of Fisheries and Wildlife at OSU and long-time leader of the Molluscan Broodstock Program, has two large tanks in which he can grow about 20-30 pounds of dulse a week. He has plans to up the production to 100 pounds a week. For now, they are using the dulse for research at the Food Innovation Center on dulse recipes and products.

However, Toombs’ MBA students are preparing a marketing plan for a new line of specialty foods and exploring the potential for a new aquaculture industry.

“The dulse grows using a water recirculation system,” Langdon said. “Theoretically, you could create an industry in eastern Oregon almost as easily as you could along the coast with a bit of supplementation. You just need a modest amount of seawater and some sunshine.”