Higher sodium, lower blood pressure. You read that right. This post from The San Diego Union-Tribune highlights a new study that says dietary advice for sodium is not scientifically justified.

In another blow against decades of accepted medical wisdom, one of the most prestigious, long-running studies reports that lowering sodium intake doesn’t reduce blood pressure.

The study also implies that most Americans are consuming a perfectly healthy amount of salt, the main source of sodium. But those who are salt-sensitive, about 20 to 25 percent of the population, still need to restrict salt intake.

Consuming fewer than 2,500 milligrams of sodium daily is actually associated with higher blood pressure, according to the Framingham Offspring Study report, given today. The abstract is available at: j.mp/ebsaltr.

The American Heart Association recommends consuming no more than 2,300 milligrams of sodium daily, equal to a teaspoon of ordinary iodized table salt.

Moreover, the lowest blood pressure was recorded by those who consumed 4,000 milligrams or more a day — amounts considered dangerously high by medical authorities such as the American Heart Association.

Those taking from 2,500 milligrams to 4,000 milligrams a day had very slightly higher blood pressure, but significantly below the low-sodium group. The average American consumes 3,400 milligrams of sodium a day.

Higher levels of calcium, potassium and magnesium were also associated with lower blood pressure. The lowest readings came from people who consumed an average of 3,717 milligrams of sodium and 3,211 milligrams of potassium a day.

The new report was delivered in Chicago during the Experimental Biology meeting by Lynn L. Moore, an associate professor of medicine at Boston University School of Medicine.

The report directly contradicts advice from the American Heart Association, which recommends consuming less than 1,500 milligrams of sodium a day to reduce blood pressure and risk of heart disease.

The American Heart Association justifies its recommendation on a 2001 study in the New England Journal of Medicine . The study is cited in a “scientific statement” by the association.

The NEJM study examined 412 participants for 30 days. They were randomly assigned to eat either a control diet or the Dietary Approaches to Stop Hypertension (DASH) diet, which is rich in vegetables, fruits, and low-fat dairy products,in persons with and in those without hypertension.

The Framingham Offspring Study based its findings on a population of more than 2,600 men and women, whom it followed for 16 years. That means it can capture the long-term results of salt consumption, which the New England Journal of Medicine study couldn’t do because of its short duration.

Cheryl Anderson, a member of the American Heart Association’s Nutrition Committee, said the study appeared to have some weaknesses in data collection, according to its abstract. Anderson didn’t attend the presentation, because she was delivering her own at the same time.

The best standard for such studies of sodium intake is a 24-hour multiple urine collections protocol, which the study didn’t have, said Anderson, an associate professor in the Department of Family and Preventive Medicine at UC San Diego.

And it’s also possible that some of those in the study may have changed their sodium intake because they developed high blood pressure, which would confound the correlation, she said.

“When I put it in the broader context of the general literature around dietary sodium assessment and blood pressure, particularly from what we know about clinical trials, (the study) didn’t bother me in any way,” Anderson said.

“Until I see the whole paper, this is not going in any way to disrupt my current thinking around that fact that high sodium intakes are likely to increase your blood pressure.”

Anderson pointed to studies that examined the relationship between sodium intake and the outcome of cardiovascular disease events. These include a study published in the journal BMJ in 2007, led by Nancy Cook of Brigham and Women’s Hospital, Harvard Medical School in Boston.

That study enrolled 744 participants with prehypertension, randomized to either a low-sodium diet or control. It included an original measurement of sodium and subsequent followups.

“The crude rate of cardiovascular disease was somewhat lower among those assigned to the sodium reduction intervention in stratified analysis) than corresponding controls,” the study stated. “After adjustment for baseline characteristics, particularly the imbalance in age, there were significant differences between groups.”

That study began with urinary measurements of sodium excretion, but in the final long-term followup questionnaire, the study used self-reported information on sodium intake.

Anderson said ideally, such studies outcomes would have followed the 24-hour urine collection protocol, but that has proven too difficult. People would need to be monitored for decades to detect the long-term effects of dietary sodium, and that would be prohibitively expensive.

“Are you going to give me money for 25 years to do that?” Anderson asked. “That’s why these studies haven’t been done. It’s because they’re logistically quite a challenge, from a funding perspective almost impossible.”

Moore, who delivered the report at the Experimental Biology meeting, said the putative link between higher sodium consumption, higher blood pressure, and cardiovascular disease and stroke wasn’t well understood. More recent evidence suggests the logic behind that link is flawed.

“A low-sodium diet has been popularized for a few decades, and I think it originally had to do with the observation that among people with high blood pressure, if you restrict their sodium intake, their blood pressure actually goes down.”

“I think that led to the inference that restricting your sodium intake in general (among the public) would actually reduce your risk of developing high blood pressure,” Moore said.

This chain-of-events thinking led to the recommendation that the general population cut its sodium intake. This belief has led to numerous initiatives to lower dietary sodium, including former First Lady Michelle Obama’s campaign to mandate “healthy” changes in school lunches. President Trump reportedly plans to drop some of those restrictions.

Meanwhile, evidence undermined the extrapolation, Moore said. The picture turned out to be much more complicated. People on the lowest-sodium diets actually appeared to have higher cardiovascular risk and risk of dying than those taking more sodium.

“There’s been consequently a lot of controversy over the last five or six years over this topic, but there is a growing body of evidence suggesting that the relationship between sodium and cardiovascular disease is actually J-shaped.”

Moore was referring to a pattern in which an extremely low level of the substance being measured produces a higher risk, which falls to a plateau and then rises again at the higher extreme.

This is the pattern found in an August 2014 study in the New England Journal of Medicine, which found a greatly elevated risk of death or major heart event at the dietary sodium level recommended by the American Heart Association.

The study also found that the average intake for Americans placed them near the bottom of the risk curve.

Anderson, the American Heart Association scientist, said that study was also flawed because it didn’t use a 24-hour urine collection protocol.

Moore said greater attention needs to be given to a hypothesis that people generally consume the amount of sodium they need. In other words, they are biologically driven to keep their consumption within a certain range.

The J-shaped curve implies that tampering with this drive could cause unforeseen health problems.

“There’s evidence that salt restriction has a lot of effects on other systems other than blood pressure,” Moore said. “You end up with higher levels of renin, rather than lower levels,” referring to an enzyme that helps raise blood pressure.

“Other studies have shown that cholesterol goes up, triglyceride levels go up,. So there are a number of effects on known risk factors for heart disease that are independent of blood pressure, that seem to be activated in a setting of salt restriction,” she said. 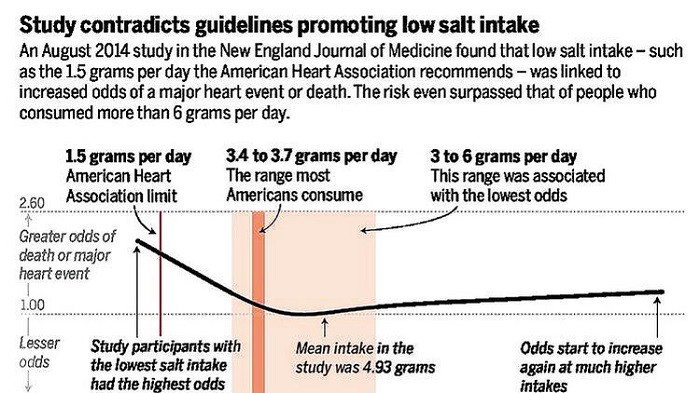 Other reports in recent years have challenged the scientific basis of dietary advice on salt. These include a 2011 Cochrane Review study, a Sept. 2014 study in the American Journal of Hypertension, and in January 2015, in the Journal of the American Medical Association.

The 2010 Dietary Guidelines for Americans recommended that sodium intake be lowered to 2,300 milligrams per day for the general population. , The report is a joint project of the U.S. Departments of Health and Human Services and of Agriculture.

However, a 2013 report by the Institute of Medicine specifically declined to endorse that limit, in part because the quality of information was insufficient.

“Overall, the committee found that both the quantity and quality of relevant studies to be less than optimal,” the IOM report delicately stated.

But the carefully worded report also concluded that the bulk of the evidence indicates a correlation between higher levels of sodium intake and cardiovascular disease.

It also said there was insufficient evidence to conclude that lowering sodium intake below 2,300 milligrams per day either increases or decreases the risk of cardiovascular disease or death in the general population.

The 2015 version of the Dietary Guidelines for Americans repeats the recommendation to lower sodium intake to less than 2,300 milligrams.

The next edition of the guidelines is scheduled to be released in 2020.