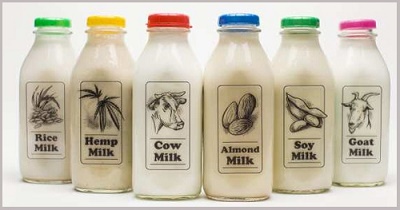 There is a lot of hype over dairy-free milk alternatives like nut, soy and rice milks. The dairy alternative section is now nearly as large as the dairy section in the grocery store. But are the dairy free alternatives, and specifically almond milk, everything that it’s cracked up to be?

What are the nutritional benefits of switching to almond milk over dairy, or even over other milk substitutes? Recently there has been a lot of attention given to nut milks, proclaiming a wide variety of supposed health benefits, but more often than not these health claims are vastly out of proportion to the reality.

What is Almond Milk?

Like all nut milks, almond milk is essentially just almond flavored water. It is made by soaking or blending almonds with water over a period time, and then straining the almonds out. One positive thing about almond milk is that it is actually very easy to make at home, and can be a fun activity to do with kids. Unfortunately, just because you make it at home doesn’t mean it is better for you than the store-bought varieties. In fact, the store-bought versions are only better for you because they are fortified with vitamins and minerals in an attempt to make them as nutritious as cow’s milk.

Almond milk, and other nut milks, are essentially water.  When compared to the almonds themselves, the nutritional benefit of almond milk is almost a joke.  For example, it is often toted as being high in protein when it fact it is much lower in protein than animal products. Cow’s milk contains 3.5 g of protein per 100 ml of liquid, while almond milk barely registers at 0.5 g per 100 ml. The actual almond is nearly 20% protein, but because the nuts are discarded from the liquid to make the milk, the protein portion is in large part discarded.

Another popular assumption about almond milk is that it is high in vitamin D and vitamin B. This is absolutely not the case, but we all assume it to be true because we all have read the branded labels at the supermarket. These commercial almond milks have been fortified to contain more vitamins and minerals than would naturally be found in it. Many nut milks are also fortified with calcium to better copy cow’s milk’s nutritional benefits.

Have you ever heard that almond milk is good for your skin? This is an often-repeated assumption that seems to be based on the fact that almonds nuts are good for your skin. Almonds contain, magnesium, vitamin E and biotin; all things that support healthy glowing skin. Unfortunately, as we have already discussed, the almond meal is fully discarded from the final milk product. Therefore, the remaining product has such limited quantities of these skin rejuvenating minerals that the claim isn’t valid any more.

Many people start making the switch to almond milk because they assume it might be better for the environment, but it might be a good idea to look at the comparison between raising cows versus growing almond trees. At the moment, nearly 80% of the world’s almonds are produced in California. California has just come out the other side after over a decade of severe drought which has crippled their agricultural industry. Massive amounts of water has been diverted over the years to supply the almond industry alongside others. Almond trees are extremely thirsty, and when studied by the University of California in 2016 it was found that almond production requires more water than it would to raise an equivalent amount of dairy cows. Although almond production obviously emits far less methane than bovines, due to being extremely concentrated within a limited area (that is already prone to drought), it might be argued that almond production has a much greater environmental impact than industrialized dairy products.

Perhaps the greatest assumption about almond milk is that it is mostly almond based. But if you read the labeling carefully of most common almond milk brands, they are mostly just water. For example, Pureharvest is an outlier with 7% almonds, but most commercial brands are actually only 3% or less. Considering how expensive almonds have become over the past few years due to the drought throughout California, it might make you reconsider spending so much money for something that really isn’t so full of almonds as you expected.

Why Should You Drink Almond Milk?

Despite all the unvalidated hype about almond milk, there are actually a few solid arguments for making the switch in certain situations. First, if you are looking to make the switch away from animal based products almond milk is a great substitute for many recipes (savory or sweet). It is also much lower in calories and fats than cow’s milk, making it a good addition if you are trying to watch your waistline. But, because almond milk lacks many of the important vitamins and minerals found within animal milks, it is important to search out fortified versions, as well as supplement your diet with other foods to make up for the loss.