Whether it’s the holiday season or you’re just looking to drop a few pounds, how many times have you heard that you should go for the white meat instead of the dark meat? By and large, when it comes to turkey (and chicken), you’ve likely been conditioned to believe that white (breast) meat is “better” and “healthier” than dark (thigh and leg) meat…but is that actually true?

For this white meat vs. dark meat turkey faceoff, let’s take out the figurative carving knife. Is there any truth to the common notion that white meat is nutritionally superior to dark meat? Or, is it just another nutrition myth that needs to be busted?

To start, let’s peel back the skin, so to speak, and dig into what makes dark meat dark and white meat white. Speaking of skin, in this white meat vs. dark meat turkey faceoff, we’ll specifically be referring to skinless meat.

So, what gives meat its color? It comes down to a protein called myoglobin. Let’s take a step back for a moment. Both dark and white meat is largely made up of the muscles. Myoglobin is a protein that stores oxygen, which is necessary to fuel activity. The darker the meat, the greater the concentration of myoglobin.

Think about it for a second…when talking turkey (and chicken), you’ll find the dark meat in the legs and thighs. Considering that these flightless birds spend the majority of their time walking, it makes sense that they store more myoglobin in the very muscles that power them around, right? 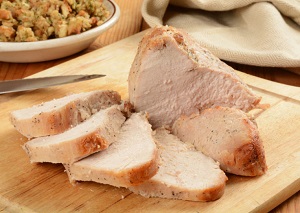 Okay, so with that little poultry science lesson under your belt, let’s let the facts speak for themselves—the nutrition facts, that is. Here’s a side-by-side comparison of the nutrition facts of a standard 3-ounce serving of roasted, skinless white meat vs. dark meat.

My guess is that your eyes may be drawn to the top to nutritional characteristics: Calories and fat. And if so, you may have noticed that a serving of white meat contains 15% fewer calories and 65% less fat.

In the case of the former, the difference in calories is not nearly as substantial as you might think; in fact, I’d go so far as to say that it’s negligible. And in terms of the fat content, while the difference is statistically significant, as we’ve talked about previously, low fat is not necessarily better. In fact, the long-standing low-fat ideology seems to have played a significant role in the obesity epidemic.

Beyond that, both white and dark meat turkey are excellent sources of protein, with both providing a similar amount. However, there are some nutritional differences that are worth pointing out. Let’s take a look.

The Verdict Is in…

When it comes to the battle of white meat vs. dark meat turkey, white meat isn’t the clear-cut “winner” we’ve been led to believe. This is especially true given the minor differences in total calories and the inconsequential difference in fat content. Having said that, white and dark meat each have unique micronutrient advantages that may be particularly relevant to certain populations.

For instance, if you’re an athlete—particularly a young female athlete—the iron and zinc content of dark meat might make it a particularly valuable component of your nutrition plan. On the other hand, if you don’t eat many animal-based products, then the B vitamin content of white meat may make it a better choice.

Personal preference also plays a significant role. In other words, if you prefer the taste of dark meat, go for it! If white meat floats your boat, don’t let me stop you. Lastly, considering the complementary micronutrient profiles, the “best” strategy might be to eat BOTH.