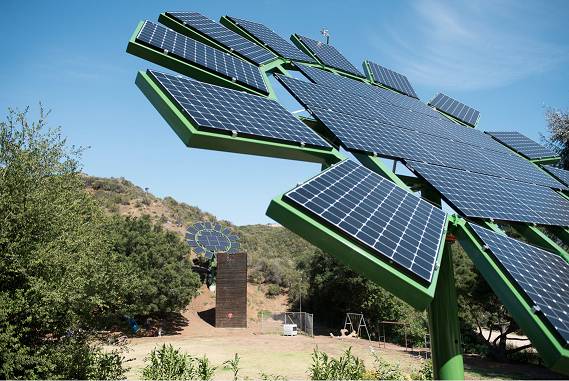 James Cameron, the director of Avatar, has turned his attention to designing cinematic-quality solar panels for the rest of us lesser mortals. This post from Business Insider India turns the spot light on the solar-powered Sun Flowers designed by Cameron that are likely to encourage wider use of solar power.

Everything James Cameron does is big.

Eighty-five years after the world’s largest ship sank, the famed Hollywood director turned the RMS Titanic’s fatal voyage into a movie that set records for longevity at the box office.

“Avatar,” meanwhile, needs its own Wikipedia page to list all the records it has set.

Now Cameron is bringing his love of magnitude to solar energy with theSun Flower, a large solar structure that’s actually nice to look at.

Composed of one central panel surrounded by 14 smaller “petals,” each Sun Flower is designed to provide an alternative to traditional solar panels that, while functional, strike many people as eyesores.

“The idea was to unify form and function with this life-affirming image that anyone looking at it would instantly get,” explained Cameron, who first launched the Sun Flower grid near Malibu’s MUSE School, to Gizmodo’s Alissa Walker.

Sun Flowers, like their yellow-petaled counterparts, track the sun over the course of the day to catch the maximum amount of rays. This is both an artistic choice and a functional one.

Traditional solar panels sit idly on a hillside, roof, or angled platform. This causes them to miss out on valuable hours of solar energy as the sun moves across the sky, reducing their efficiency.

Total Sun Flower output can reach 260 kilowatt hours per day, or enough to satisfy 75 to 90% of the school’s total energy needs, Gizmodo reports.

Cameron says the project will be patented, but released on an open-source platform.

The designs follow Cameron’s earlier work developing a set of retractable solar panels with FEMA. The panels are designed for emergency situations when the power goes out.

His other environmentally-conscious missions have included making the “Avatar” series the first film production entirely powered by the sun, andeliminating the need for helicopters in aerial shots, since drones can accomplish many of the same tasks without the heavy footprint.

Cameron has even launched a contest in New Zealand to find the optimal drone-based camera rigging.