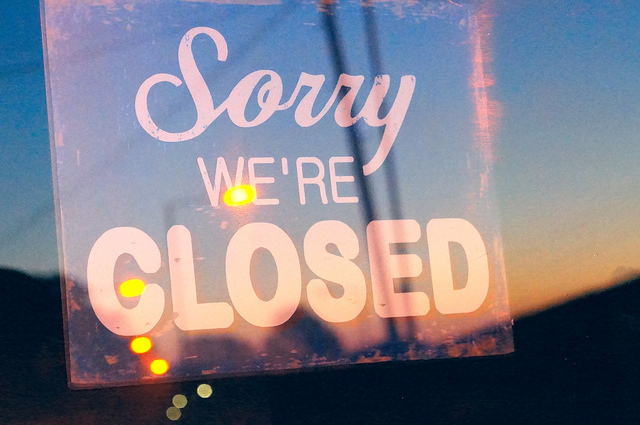 Thanksgiving is right around the corner in the U.S., which means turkey, football and — for many — a whole helluva lot of shopping.

Over the past few years, we’ve noticed a pretty disturbing trend — retailers are opening earlier and earlier on Thanksgiving, in an attempt to lure shoppers from their tryptophan-induced comas with the promise of rock-bottom deals. We Americans have been trampling each other to death on Black Friday for decades, but, suddenly, even that is no longer enough for many retailers.

But amidst the cringe-worthy advertisements that stores will open One hour earlier this year! is a trend that’s actually worth our attention: A growing number of forward-thinking companies are taking a stand against the overconsumption that has long held American Thanksgiving hostage. Read on for the details.

Late last month, REI hit the headlines in a big way for announcing that it will close the doors on Black Friday at all 143 of its retail locations, as well as its headquarters and two distribution centers. REI has shuttered on Thanksgiving for years to give employees time to spend with their families. But this year the outdoor company will do them one better.

Instead of coming to work the day after Thanksgiving, the co-op is paying its 12,000 employees so they can do what they love most — be outside. And along with its employees, REI is inviting the nation to join in by choosing to #OptOutside to reconnect with family and friends this Thanksgiving holiday.

REI’s bold move against overconsumption proved to be a hit with customers and the media. Users quickly began to use the hashtag on social media, praising the company for its decision and sharing ideas for outdoor places to visit instead of standing in line at the mall. REI’s move even inspired this roundup. Thanks, guys!

Customers weren’t the only ones to take notice of the #OptOutside hashtag. Fellow outdoor apparel company Outdoor Research loved the idea so much, it decided to jump on board.

Announcing that it would #OptOutside, and fully crediting REI for the inspiration, Outdoor Research announced it would close its offices, distribution center, and Seattle factory and retail store the day after Thanksgiving.

The company also launched an Instagram campaign to raise money for the adaptive sports nonprofit Paradox Sports. For three days -— Black Friday and the Saturday and Sunday after -— users are invited to tag Instagram photos of their outdoor adventures with #OptOutside and #OutdoorResearch. For every photo, Outdoor Research will donate $10 to Paradox Sports — up to $5,000.

The day after REI launched the #OptOutside campaign, Clif Bar took to social media to show its support for the outdoor apparel company’s efforts.

“We couldn’t agree more ‪#‎REI‬ – outside does make our lives better! High fives to you and your team for encouraging everyone to get outside on Black Friday,” Clif Bar wrote on Facebook. “At Clif Bar & Co. we are excited to take advantage of our day off to pursue our own adventures. Don’t log on and look for us online – we’ll be out running, hiking, swimming, climbing, riding and charging the outdoors in our own way. See you out there! ‪#‎optoutside”

While Clif Bar doesn’t have retail locations, its move to give all of its employees the day off — even if it means going dark on social media — definitely deserves a pat on the back.

Gregory Packs, which sells backpacks and other mountain gear, said it will also join REI in its #OptOutside campaign, as it told its fans on Twitter:

REI, for its part, seems stoked to have inspired this new take on Black Friday: 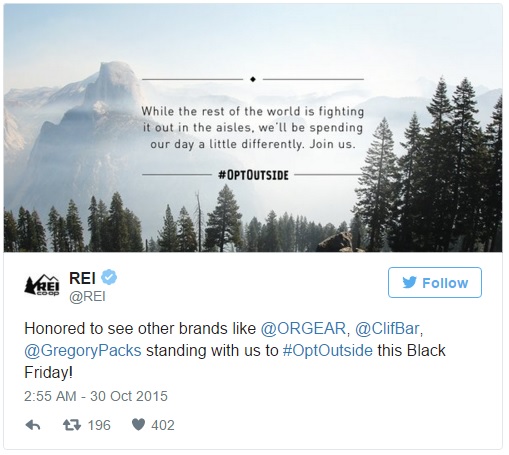 GameStop is a pretty big deal for holiday shoppers. That hot new game is likley on your list, whether it’s for the young or young-at-heart. But, even as many retailers begin opening earlier and earlier on Thanksgiving, the company announced it will stay closed.

With a press release reading, “GameStop Takes a Stand!,” the company said all of its brick-and-mortar stores will remain closed on Thanksgiving. This includes GameStop locations, as well as stores for its other brands: Spring Mobile, Simply Mac and Cricket Wireless.

“We believe strongly that our customers and associates should have the opportunity to spend the Thanksgiving holiday relaxing with family and friends, and not worrying with the stress of where to find the best shopping deals,” Mike Buskey, executive vice president and president of U.S. stores, said in a statement. “We know this is in stark contrast to what many other retailers are doing, but we are taking a stance to protect family time during this important holiday.”

Once bemoaned for producing ‘throwaway’ clothing, H&M has been making big moves in sustainability as of late. This week it announced a partnership with the Ellen MacArthur Foundation to create a circular economy for clothing. The retailer also announced it would keep the doors closed on Thanksgiving for the first time this year.

“H&M would like to show our appreciation to our employees for their hard work year round, so in the tradition of Thanksgiving, H&M will close our U.S. stores on Thanksgiving Day, allowing our store teams to enjoy this time with their families and friends,” Daniel Kulle, president of H&M North America, said in a statement, as reported by theHuffington Post.

Many say it was Patagonia that first started the anti-overconsumption trend surrounding Thanksgiving and Black Friday. In 2011, it shocked shoppers across the country by taking out a full-page ad in the New York Times with the message “Don’t Buy This Jacket” emblazoned over its best-selling coat. The brazen ad asked shoppers “to buy less and to reflect before you spend a dime on this jacket or anything else.”

The company has also stayed closed on Thanksgiving for the past two years to give employees more time with their families, and it will do the same this year.

Dillard’s decided to stay closed on Thanksgiving last year “in longstanding tradition of honoring of our customers’ and associates’ time with family,” the company told ThinkProgress. The department store chain will remain closed this year, too.

Historically, Nordstrom has never opened on Thanksgiving. While that surely makes its employees — not to mention the sustainability community — pretty happy, the company’s choice is likely not for the reasons you think.

“Over the years, our tradition has been to be closed on Thanksgiving and to unveil our holiday trim the following morning,” the company told ThinkProgress. Well, whatever works!

Staples did a real 180 when it comes to its holiday schedule. It was one of many big-box stores that decided to open on Thanksgiving for the past two years, but this year it’s doing things differently.

“We want our customers and associates to enjoy Thanksgiving their own way,” Demos Parneros, president, North American stores and online, said in a statement. The company will offer Thanksgiving discounts on its website in lieu of opening its retail locations.