An elementary school in The Bronx is using sustainable farming as a vehicle for change. As students fall in love with the process of growing their own food, it instills in them a sense of pride and a new interest in what they’re putting into their bodies. Check out, in this post from MindBodyGreen, how they do it over at P.S. 55.

Tucked within the poorest congressional district in America, sandwiched between the largest strip of public housing in the country, you’ll find a farm. But not just any farm. This ever-shifting display of fruit and greens is the focal point of P.S. 55, a K-5 school in the South Bronx where 100 percent of kids are on free and reduced lunch.

For students who live in a maze of bodegas and fast food, access to fresh produce—that they grew themselves, no less—is a novelty. “We’re a walk away from the largest McDonald’s in the Bronx and the most profitable Dominos per square foot in America. For most of these kids, food is something that comes through a bulletproof window,” explains Stephen Ritz, the farm’s founder, dressed in his signature nameplate bow tie and foam cheese hat (which stands for “The Big Cheese,” of course). “What we need to do is bring the fun back to food.”

Ritz’s booming, singsong voice fills a bright classroom filled with fish tanks, bookshelves of colorful texts, and an array of vertical and LED farming technologies. A fully stocked kitchen sits next to rows of blenders powered by bicycles. This food lover’s dream has existed in the elementary school’s old library for about three years now, and so far it has produced 60,000 pounds of what Ritz calls 0-miles-to-plate produce. Outside, one of the most productive gardens in New York sits in the school’s front yard, tended to by local high school students.

Ritz speaks with gusto as he shows off a colorful map of every county in New York and explains how his students will soon set out to eat a piece of produce native to each one. That’s after they feed the entire school lunch from their kitchen the next day, of course. Since he’s started the program, attendance has shot up from 40 percent to 93 percent. 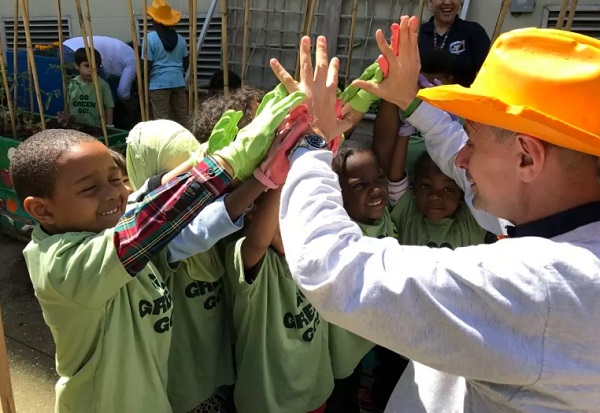 Ritz himself is not a farmer. He’s a former basketball player who returned to his native Bronx after a career-ending injury and found it a lot rougher than he remembered. After landing his first teaching job, he discovered a knack for dealing with students with behavioral issues that stemmed from difficult lives at home

“The real trick was to make school relevant to their lives. Was I a genius? Not at all. Was I highly credentialed? Even less so. But I cared enough about these children to find ways to engage them,” Ritz reflects in his new memoir, The Power of a Plant. He started doing so by bringing the classroom outside—and bringing the outside into the classroom. During his time at Walton High School, he started a “Green Teens” task force, where kids used plants to cover up graffiti and gang tags around the neighborhood. Then the inside of his classroom had a fish tank, and then a few flowers. One day, during a brawl, instead of pulling out a weapon like Ritz assumed he would, he pulled out a bouquet of daffodils. At that moment, it became clear that access to nature was changing his kids’ behavior. Ritz then incorporated some edible plants in with the ornamental ones, became the first teacher to place a tower garden in his class, and the rest is history.

He watched as students fell in love with the process of growing their own food. He took them on field trips to other boroughs to check out urban farms in action, reminiscing on a trek to Whole Foods that showed them all the varieties of produce out there and inspired them to get a bit more adventurous back on the school farm.

Now, lemon sorrel and cabbage for kimchi are staples on his class menu, and some of Ritz’s high school grads have left to go work at Whole Foods and other popular producers like Fresh Direct and Gotham Greens.

Why farming is so transformative at P.S. 55. 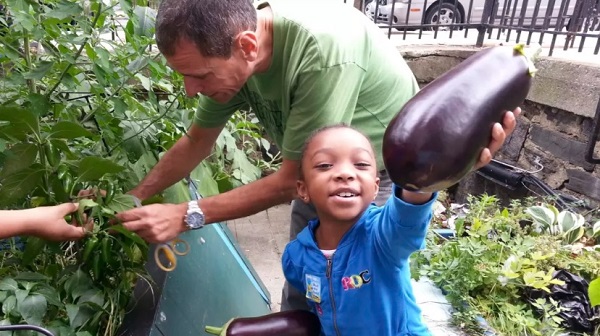 Back inside the farm, aptly named The National Health, Wellness & Learning Center, Ritz explains why he thinks growing food has led to happier, healthier kids. “When you put a seed in a little kid’s hand, you’re making them a promise that little seed is going to grow into something great that they can eat. And then they get to watch it happen.” This instills in them a sense of pride and a new interest in what they’re putting into their bodies. A lot of kids start their time at P.S. 55 not knowing that food comes from the ground at all, but they all leave with an understanding of every part of the growing process.

“It’s sticky learning. The things they learn here stick with them throughout their day. They take the recipes home to their parents,” Ritz explains, adding that more than a dozen school families recently signed on to their first fresh food box. “Collectively, the parents in the school have lost several hundred pounds.”

Kids are starting to take their health into their own hands in more ways than one. After researching the amount of sugar in their chocolate milk, for example, they convinced the principal to ban it from the lunch room. Ritz is heartened to see each child grow into his or her own unique tastes, and he says they always arrive eager to learn what dishes are on the day’s menu. (Right now, veggie pizzas and hummus are two crowd favorites.)

Perhaps most importantly, spending time in the Wellness Center has helped these kids see the results of hard work and diligence. Elements of math, science, and pretty much every other topic you can imagine are woven into each growing lesson plan, and this project-based learning helps them apply classroom knowledge in practical settings. As a result, 100 percent of the high schoolers whom Ritz has taught have passed their New York state exams. 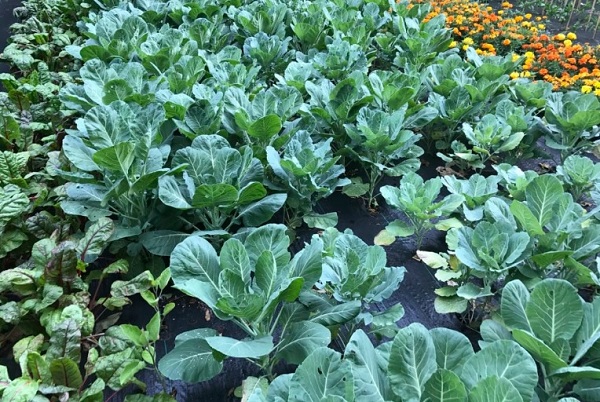 Though Ritz and his wife and collaborator Lizette have transitioned to become unpaid volunteers at the center over the years, they still are there for kids 6.5 days a week (the class and outdoor farm stay open 365 days a year to give kids a place to go on weekends and holidays). For him, simply being present in students’ lives is huge.

“All the data indicates that if children have access to one kind, caring adult in their life, they’ll be successful. My goal is to be that kind, caring adult for as many people as possible,” he says. “It’s about teaching children to respect themselves, their bodies, and their communities.” Walking around, it’s clear he knows every single one of the school’s 785 children by name.

“We don’t tell people to do anything,” he says, making the point that the kids are far better farmers than he’ll ever be. “What we do is make resources available and love them. Nobody will go broke giving love.”

This compassion has catapulted Ritz’s curriculum out of this one classroom and around the world many times over. Since he began teaching a plant-based curriculum, educators from 60 countries and six continents have stopped by his classroom for inspiration. P.S. 55 students have appeared on the cover of Time for Kids, and the White House chef has stopped by to prepare “Tower Garden Tacos” with them. Ritz himself has met Oprah and the pope during his time traveling the world to receive awards for his distinguished teaching.

Now, he is on a mission to spread his curriculum to any school that will use it. Next up comes a partnership with Chicago public schools, then the opening of a sister classroom in Dubai through a partnership with ESOL education. He’s also launching a growing program for parents in the Bronx, as well as an apprentice program so older kids can enter the workforce with a knowledge of urban farming technology.

“It’s proof that the Bronx is ready, willing, and able to export our talent and diversity in ways that people never imagined. Are there huge disparities here? Absolutely. But kids just need to see good behavior. They just need to see love. We need to love people and use things, instead of loving things and using people.”