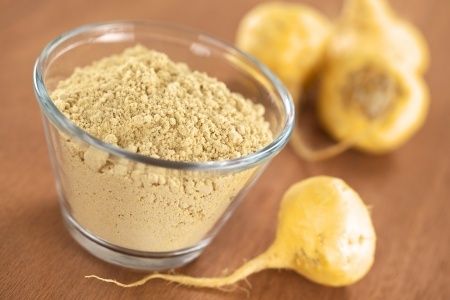 There are several varieties of maca root, each boasting incredible health benefits. Join BeWellBuzz as we evaluate the health claims for this simple root.

The South American country of Peru is home to many useful and desirable plants. The crisp, clean air of the Andes mountains spawns such wonderful things as Peruvian coffee, llamas, and maca roots. Maca has been called the “Peruvians Viagra” because of it’s supposed aphrodisiac effects. Legend has it that Inca warriors, famed for their ferocity in battle, were dosed with maca before each battle, and the women had to be hidden from the returning warriors upon their return because of their heightened virility. But is there any physical proof to health claims for this simple root?

The maca plant (Lepidium meyenii) is closely related to radishes, turnips, and horseradish. It is native to a small area of Central Peru around Lake Junin. It has been used locally as both a food source, and a health supplement for thousands of years.

There are several varieties if maca, ranging from tan-colored, which are the largest and most widely grown, to red, purple and black. The darker colors contain more iodine and the red maca has been clinically shown to reduce prostrate size in lab rats. Although all parts of the plant are useable, the fleshy root is the part most often used. The leaves are quite edible, and the entire plant is very high in nutritional values, similar to wheat, rice and corn.

The basic nutritional breakdown is around 65-75% carbohydrates, 10-14% proteins, 8.5% dietary fiber and about 2% fat. Maca is rich in potassium, calcium, iron, zinc, manganese, copper, fatty acids, linolic acid, palmitic acid, oleic acid, and over 19 amino acids. More importantly, maca is a great source of iodine, vital for good health.  It is possible that the fabled aphrodisiac properties attributed to this humble root could be caused just by people feeling healthier and better after consuming it. People who are healthier, and feel better tend to become a bit…friskier…and more apt to, “feel their oats”, as it were.

Up until the 1980s, maca has only been grown around the Lake Junin area. With the boom of interest in Natural Health Supplements, cultivation has expanded greatly throughout Peru and in Bolivia.

Since maca has been consumed as a basic food staple for both humans and livestock for centuries, there appears to be little danger of any adverse effects from it, save the occasional allergic reaction. But is there any hard evidence that it has any positive health effects? Well, we know that the vitamins and minerals in the plant certainly have healthy benefits. There is no need to test that. And we do know that red maca can reduce prostate size, at least in some lab rats.

Is Maca an Aphrodisiac?

Other than for the reasons stated earlier, most likely, no. If that were true, then, since the Peruvians have used maca as a major food source for thousands of years, they should have over-populated the Earth by now.  In fact, the Peruvians themselves do not consider maca as anything but a great vegetable. The problem with calling something an aphrodisiac is that there has never been anything that could positively be proven to increase the desire for mating in humans, beyond what would normally work anyway (visual stimulation, mood, pheromones, situations, all working in concert). Certainly nothing has ever been proven to arouse someone against their will. The search for the elusive Love Potion is still underway.

Contrary to popular belief and hype, the drug Viagra is not an aphrodisiac. It only increases blood flow, allowing some compromised parts to function better. It does not increase the desire for copulation any more than normal stimuli would. It is simply a chemically induced…well, you get the point.

Humans are a much more complex organism than anything else on the planet. For humans, sex has evolved far beyond a simple act to guarantee the survival of the species. Sex between humans is as much, or even more, of a psychological experience as it is a physical one. Because of this, it is unlikely there will ever be anything discovered that could be called a true aphrodisiac in any capacity other than a placebo. However, also as stated earlier, the healthier you feel, the more likely you are to want to share your great health with a willing partner. So the amorous claims for maca could still be partially valid. In any case, the plant has more than enough nutritional benefits for it to be seriously considered as an addition to your supplement stocks.

But the benefits don’t stop here. Maca root, like the Chinese herb ginseng, is also an adaptogen.  Adaptogens  are  substances that raise the physical body’s state of resistance to diseases through physiological and emotional health improvements. This makes Maca a broad based healer with many benefits able to  support and rejuvenate overwhelmed, tired adrenal glands eventually resulting in much greater energy, stamina, clarity of mind and spirit, and the ability to handle stress.

One other important note is that scientists  have also discovered that due to Maca’s nutritional value, the food has the ability to regulate, support, and balance the hormonal systems of both men and women for optimal function.

One of the very great things about Peruvian Maca root is that it is not “gender specific” and works equally well for both men and women. I’m sure you would love to include it in your diet. You can easily get maca in a capsule form or maca powder and add it to your smoothies. We use and highly recommend this raw organic maca.

This article is for informational purposes only, and does not constitute medical advice of any kind. If you feel you have a health issue, consult a licensed health care provider as soon as possible.

Clément, Céline; Diaz Grados; Diego A.; Bharathi A.; Khan I. A.; Mayer A. C.; Ponce A.; Dante D.; Manrique I.; Kreuzer M. (2010). “Influence of colour type and previous cultivation on secondary metabolites in hypocotyls and leaves of maca (Lepidium meyenii Walpers)”