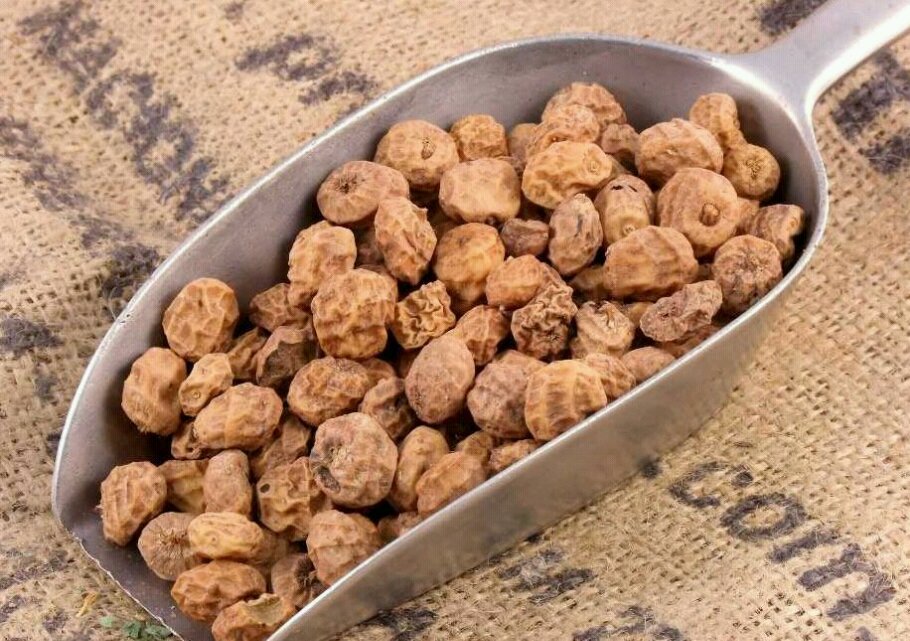 Native to Northern Africa and the Mediterranean, the tigernuts are giving almonds and cashews a run for their money. This post from MyDomaine turns the spotlight on this superfood that is flying off the shelves at Whole Foods.

For those of you who frequent Whole Foods, you may have noticed a newcomer on the superfood aisle: tigernuts. Despite the somewhat menacing moniker, tigernuts are derived from neither tigers nor nuts; in fact, these coconut-flavored tubers are actually root vegetables native to Northern Africa and the Mediterranean, as Vogue reports. Tigernuts earned their ferocious-sounding name due to the stripes on their outer skin and live up to their intense reputation in the nutrient department.

A veritable fountain of prebiotic fiber, potassium, iron, vitamin E, and unsaturated fatty acids, tigernuts are in the midst of their meteoric rise to fame as the latest and greatest superfood.

A direct competitor of almonds and cashews, these sweet-tasting, low-calorie bits make for the perfect afternoon snack as well as a safe alternative for people with nut allergies. While tigernuts may be new to American health food stores, they’re anything but within the larger health community.

Just look at Jack Sims, the man credited with bringing these nutrient-rich tubers onto American soil. Sims grew up eating tigernuts in the UK, mainly as a candy replacement during World War II, when candy was rationed. He later discovered that “tigernuts are probably the healthiest ‘single source’ snack on the market” and subsequently opened his tigernut business in Newburgh, New York. But by far the most active producer of tigernuts in America is Organic Gemini out of Brooklyn, New York. The young company, which started just two years ago, in 2014, now produces organic tigernut snacks, flour, horchata, oil, smoothie mix, and more.

Tigernut allergies are probably one of the rarest food allergies ever. Since they are a tuber, tigernuts are completely soy, dairy, grain, nut, seed (etc, etc.) free. Further, Organic Gemini has a dedicated gluten-free, peanut-free and tree nut-free facility to prevent cross-contamination.

Tigernuts are the highest whole food source of a unique type of fiber called resistant starch. Besides the pleasant flavor and texture, the resistant starch content is why I eat tigernuts on a regular basis. Resistant starch is a highly beneficial pre-biotic, which means it feeds the good bacteria in your digestive tract.

Resistant starch has been a hot topic lately in the health world as more and more research shows the unique benefits of this plant fiber. For example, research indicates that resistant starch could be a powerful component in preventing and/or addressing diabetes and obesity!

One thing to keep in mind, however, is that introducing resistant starch for the first time may produce some symptoms of a shift in gut flora. You may wish to introduce tigernuts gradually and see if you experience symptoms such as gas or bloating. If you do, slowly but consistently increase the amount of tigernuts starting at just one or two a day.

Source: This New Superfood Is Flying Off the Shelves at Whole Foods | MyDomaine