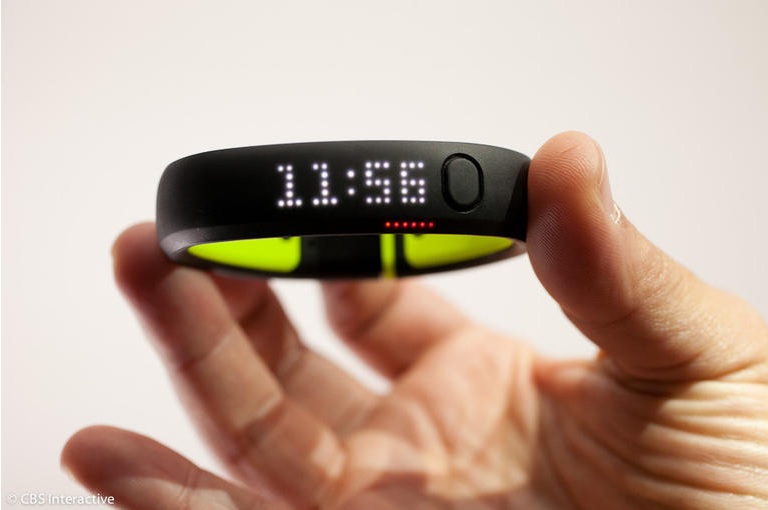 Nike FuelBand’s journey may be coming to an end, but the sportswear company is strong on its technology.

The sportswear company could be close to ditching its fitness hardware efforts, but don’t sound the death knell for Nike technology. Consider, for one thing, the Apple connection, says Nick Statt in this post from CNET:

Nike, which expanded its focus from sportswear to technology with its wrist-worn FuelBand fitness tracker two years ago, has held serious discussions about exiting the market for wearable hardware, a person familiar with the matter told CNET.

Nike currently sells its flagship device, the Nike+ FuelBand SE, for $150 alongside its Nike+ sports watch for $140. Nike has never disclosed sales figures for the devices.

However, the nascent fitness tracker market was estimated to be worth just $330 million in 2013, with competitors — from Fitbit and Jawbone to Withings and Garmin — all scrambling for a slice of that pie. The FuelBand accounted for 10 percent of sales of all wearable fitness trackers from brick-and-mortar stores and large online retailers last year, according to The NPD Group.

Ditching its devices wouldn’t mean the end of Nike’s wearable presence. Nike may be better situated as a data collector and app maker for its increasingly robust digital fitness platform, Nike+, than it is a seller of wristbands, say analysts. It could also potentially partner with Apple. Tim Cook, Apple’s CEO, has served on the Nike board for nine years, and the Nike FuelBand companion app has — for the two-year period its been on the market — always been exclusive to Apple’s iOS mobile operating systemfor the iPhone and iPad.

“The agenda isn’t to sell FuelBands,” said Jim Duffy, a Nike analyst with Stifel, Nicolaus & Company, on Nike’s wearable focus. “It’s to develop this customer database and pool of customers that they can have a dialogue with…to make people more active and thus increase demand for core products.”

The discussions at Nike, which released its next generation FuelBand last November, took place in recent months, said the person, who asked not to be named because the talks were confidential. At one point, the decision was made to officially cease wearable hardware development, though that may have changed since the discussions were initially held and deliberation may be ongoing, the person said.

A Nike spokesman said the company had no further comment to provide.

The possible move out of hardware comes at a time when existing mobile device makers are looking to the wearable market for new opportunities. Google’s Android Wear — an operating system designed for wearable devices — has attracted a bevy of partners, including Motorola and Fossil, which have both announced Android Wear-powered smartwatches.

Samsung, which introduced its first smartwatch last year, continues to update its Gear watch line and itsGear Fit wristband. Apple will reportedly enter the wearable market later this year with a smartwatch dubbed the “iWatch.”

Teaming up with Apple as Nike did in 2006 to launch its Nike+iPod running tracker — the first tech leap from the sportswear company that kicked off a substantive shift in its branding strategy — is a tried and true collaboration. “That could be a very fruitful partnership,” said Faye Landes, a Nike analyst for Cowen and Company.

Apple declined to comment for this story on its relationship with Nike regarding wearables.

“Do I think Nike will be in this [the wearable device] business five years for now? They’ll definitely be in the Nike+ business because of that install base,” said Landes.

As of August 2013, Nike said it had 18 million users on its Nike+ platform. Today, Nike announced that the platform has grown to 28 million users since then. 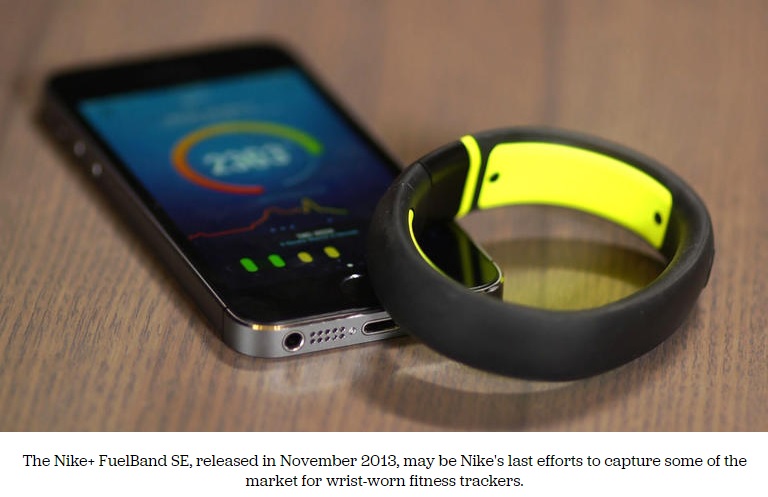 The FuelBand was released in February 2012 to large demand and strong reviews. Nike also earned raves in November 2013 with its SE upgrade.

But the fate of Nike+, the software crux of the company’s digital fitness efforts, was in a far less favorable state back in the fall of 2011.

“Just like you, we hold ourselves to incredibly high standards, and right now Nike+ isn’t living up to them,” wrote Jayme Martin, the company’s then-VP and general manager of Nike Running, in anapology letter over Nike+’s mounting issues, from syncing problems and login failures to general site slowness.

With the FuelBand — which compressed all the bells and whistles of higher-end fitness devices, like step-counting and calorie burn, into an affordable and sleek form factor — Nike turned its product efforts around. Not only did it punctuate the technical overhaul of its Nike+ platform with a device fitness junkies had been clamoring for, but the athletic shoe seller catapulted itself to the front lines of the fitness device arms race.

The FuelBand became the poster child for new lifestyle products revolving around a wrist-based device capable of capturing user-generated data, as well as the services that orbit around that activity. More FuelBands sold meant more users for Nike+ and more potential buyers of Nike’s core products.

“The FuelBand was the opportunity for them to demonstrate some innovation in a category that needed that,” said Sean Naughton, a Nike analyst with Piper Jaffray. “Ultimately for Nike, it’s about being able to leverage the data and the information they have out of that community of users to sell more footwear and apparel — and to create and deliver products that the customers are interested in.”

That strategy seems to be paying off. Not only does Nike+ now have more than 28 million users, but Nike is now beginning to expand its offerings, with iOS and Android apps like its workout training app for women, N+TC, and Nike+ Move, an exclusive iOS app that takes advantage of the iPhone 5S’s M7 motion processor to collect much of the same data a FuelBand does.

The company has its sights set on leading with software, making its FuelBand and smartwatch efforts that much more peripheral to delivering on what those devices were meant to facilitate in the first place: a Nike ecosystem that starts with the apps on your phone and ends with the shoes on your feet and the shirt on your back.

Now that smartphones can do much of the intensive tracking these devices used to do exclusively, it’s no longer necessary to have a fitness tracker to remain relevant in wearables. Take, for instance, not only Nike+ Move, but also fast-growing communities like MapMyFitness, which was purchased by Under Armour last year for $150 million.

“What these type of activity tracker devices do is solve one of the big problems that brands have, which is how do you engage with an individual in a personal way,” said Credit Suisse analyst Christian Buss, who follows Nike. “It’s different than just building a brand preference. ‘This is your activity partner.’ That’s a very different relationship.”

To that end, Nike likely sees its proprietary workout measurement metric, NikeFuel, and a fitness lifestyle brand built around it as more valuable than the chance to sell consumers a $150 device that hardly moves the needle on Nike’s $27 billion in annual sales.

The FuelBand was never meant to be a meaningful driver of earnings for Nike, or a long term leader in the wearable market, said Piper Jaffray’s Naughton. “They have this tremendous network of consumers and this community they’ve developed. That’s where the power is. That’s where all of the value is,” Naughton said. ‘Understanding that customer, building that trust, being able to understand what he or she is looking for based on the activity he or she is doing.”

Nothing sends a stronger signal of Nike’s refocused software efforts than the Nike+ Fuel Lab. The testing space, which opened today in San Francisco, will let partners — starting with workout app RunKeeper, performance tracking platform Strava, and fitness app MyFitnessPal — develop products that incorporate the company’s NikeFuel system. The company will be making the Nike+ API available this fall to any developer interested in creating something for that ecosystem.

Nike’s vice president of digital sport, Stefan Olander, said the initiative will balloon the Nike+ user base to 100 million. 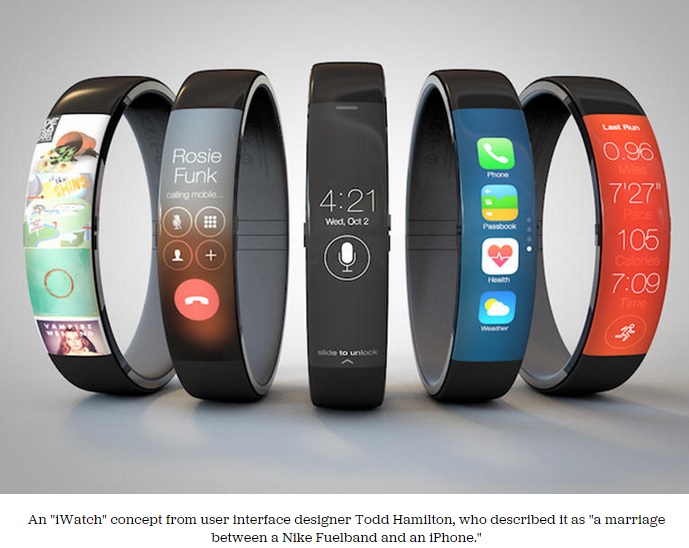 If Apple releases a smartwatch, a fitness tracker, or a combination of both, Nike could be the first in line for a partnership. Released eight years ago, the Nike+iPod Sports Kit — which included a small tracker that fit into your Nike shoes and talked with an iPod cradled in a Nike-made armband — still has adedicated page on Apple’s Web site. The tracker itself sells for $19, a $10 drop from what it originally retailed for in May 2006.

Nike, whose preeminent brand is valued at $17.3 billion last year according to the Forbes Fab 40 brand rankings, packs as powerful a marketing punch for Apple as the iPhone maker does for the Nike+ platform. 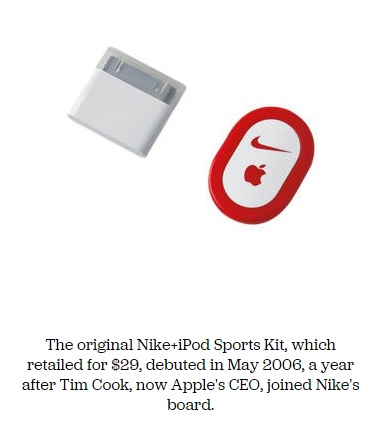 It’s long been rumored that Nike and Apple, thanks to Cook’s position on Nike’s board, have kept the FuelBand an iOS exclusive due to a kind of handshake agreement. Nike has discounted that assumption.

Olander, Nike’s VP of digital sports, said, in an interview with The Next Web in October, that the fragmented ecosystem around Google’s software has put an Android FuelBand app on the backburner while Nike focused on quality over scale. “We have nothing against Android, we’re not prohibited from doing it, we just want to make sure that when we do it, it works well,” he explained.

FuelBand fans waiting for an Android-compatible version will, no doubt, be disappointed if Nike does bow out of the device market. But Nike could now focus on shifting to a software-centric approach to wearables, a space in which its core apps already support iOS and Android devices.

“Does Nike become more software-oriented? Definitely yes,” Duffy said. “The objective for them is to build as large a community for them as possible.”

“They’re not looking to become a gadget company. Their primary focus is to continue to make athletes better. Selling more performance footwear, lifestyle footwear, apparel, and to the lesser degree some equipment products,” Naughton added. “Ultimately, the Nike+ community is really where they’re building those connections with consumers.”