Researchers at Harvard University are working on a path-breaking technique that can lay down your viral infection history. In this post from Motherboard, Jason Koebler creates awareness about the new test that is capable of laying out in front of you your entire viral history.

Your immune system has a really long memory. That’s why, when you get chicken pox, you typically don’t get sick from it again—your body has already built up the antibodies necessary to fight it off. Even though our body remembers that it’s been exposed to a virus, we don’t consciously remember or even know what viruses we’ve been infected with.

Researchers at Harvard University have whipped up a nifty new technique to essentially ask your immune system to identify every single virus you’ve ever been infected with in your life.

The technique is called VirScan, and conceptually it’s quite simple. Researchers can look at the antibodies in our bloodstream and infer what viruses they are meant to attack. But inducing those antibodies to show themselves is a bit more complicated.

According to the researchers, there are 206 species of viruses known to infect humans, each of them with certain strings of specific DNA (or RNA, in the case of retroviruses) that can be used to identify them. Harvard Medical School geneticist Stephen Elledge and his team took snippets of that genetic code and put that code inside bacteriophages (bacteria-infecting viruses that are safe to put inside a human). 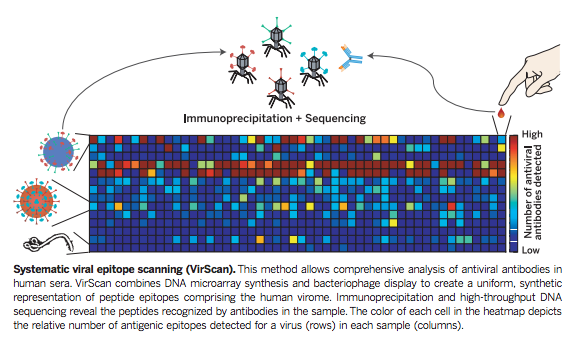 These bacteriophages are then put into a tiny blood sample—a couple drops will do. The antibodies attack the “viruses” that they’ve seen before, and Elledge’s team is then able to infer which viruses the body has been infected by, based on an analysis of the antiviral antibodies.

“We’ve developed a screening methodology to basically look back in time in people’s [blood] and see what viruses they have experienced,” Elledge said in a statement. “Instead of testing for one individual virus at a time, which is labor intensive, we can assay all of these at once.”

As Elledge mentioned, we rarely get tested for specific viruses unless we’re sick or it’s a particularly impactful virus, such as HIV. That’s generally fine, but beyond being a mere curiosity to know what viruses your body has fought off in its life, there could be a greater clinical impact to all of this.

Immunity and the immune system in general aren’t straightforward things, and it’s believed that seemingly harmless viruses could have complex interactions that can contribute to diseases that typically aren’t seen as having a viral cause.

“In addition to directly causing acute or chronic illness, viral infection can alter host immunity in more subtle ways, leaving an indelible footprint on the immune system,” Elledge wrote in a paper published in ScienceScience. “This interplay between virome and host immunity has been implicated in the pathogenesis of complex diseases such as type 1 diabetes, inflammatory bowel disease, and asthma.”

Naturally, a process like VirScan is only good if it works in humans. And so, Elledge and his team tested 569 donors from four countries (the US, South Africa, Thailand, and Peru) on four continents. Unsurprisingly, their viral exposure varied wildly: The average person had been infected by about 10 viruses, but two test subjects had been infected by as many as 84.

The team says there’s no reason why the process couldn’t be used to detect other types of pathogens, such as bacteria, fungi, and protozoa, and the team estimates it spent only about $25 per test subject to perform the study. And so, maybe someday soon, you can have an entire viral history of you.

Source: New Test Knows Every Virus That Has Ever Infected Your Body | Motherboard