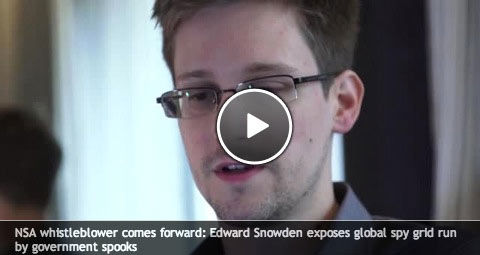 Little by little our rights and freedoms are being taken away. In a day where most are zombified into complacency by media and empty reality shows, it’s refreshing to see an act of courage against the corporatocracy that is in deep control. Edward Snowden heroicly gave up a high paying job and a comfortable life with friends and family to disclose that the NSA is spying on us illegally and unconstitutionally.

Many won’t share this story, I hope you will stand up for your rights and spread the word. We owe that to Mr. Snowden.

“The great fear that I have regarding the outcome for America of these disclosures is that nothing will change. [People] won’t be willing to take the risks necessary to stand up and fight to change things… And in the months ahead, the years ahead, it’s only going to get worse. [The NSA will] say that… because of the crisis, the dangers that we face in the world, some new and unpredicted threat, we need more authority, we need more power, and there will be nothing the people can do at that point to oppose it. And it will be turnkey tyranny.”

“You can’t come forward against the world’s most powerful intelligence agencies and be completely free from risk, because they’re such powerful adversaries, that no one can meaningfully oppose them.”

“Any analyst at any time can target anyone. Any selector, anywhere… I, sitting at my desk, certainly had the authorities to wiretap anyone, from you or your accountant, to a federal judge, to even the President…”

“When you are subverting the power of government, that’s a fundamentally dangerous thing to democracy.”

“We collect more digital communications from America than we do from the Russians.”

“The NSA has built an infrastructure that allows it to intercept almost everything. If I wanted to see your emails or your wife’s phone, all I have to do is use intercepts. I can get your emails, passwords, phone records, credit cards.”

“Even if you’re not doing anything wrong, you’re being watched and recorded. …it’s getting to the point where you don’t have to have done anything wrong, you simply have to eventually fall under suspicion from somebody, even by a wrong call, and then they can use this system to go back in time and scrutinize every decision you’ve ever made, every friend you’ve ever discussed something with, and attack you on that basis, to sort of derive suspicion from an innocent life.”