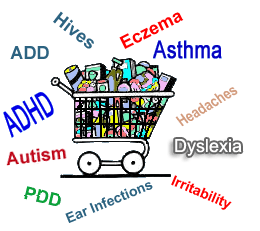 Food has been implicated in a lot of disorders, diseases and health problems, making it imperative for us to look for and vigilantly weed out these unhealthy items from our diet.

Here are some of the food additives that not only have no nutritional value but may be actually bad for you:

1. Artificial Color – Really is there any need for a food item to be bright pink or a bilious yellow in color? Food dyes are known to cause hyperactivity in children and may be present in so many different foods.

2. Transfats – They are used as preservatives in food, but what they do to clog the arteries is now something we all know.

Avoid transfats, hydrogenated and partly hydrogenated fatsand also palm oil (which is bad not only for your arteries also detrimental to the earth in the way that it is produced). These items are to be found in baked items, readymade dough, snacks even if it is not listed in the ingredients.

3. MSG – It is added to foods to make it taste good; some even say to make it addictive. It is found in many packaged goods and is thought to be used liberally in Chinese food. MSG is thought to be a culprit in weight gain, brain damage, obesity, and hormonal imbalances.

4. Caffeine – Though your morning cup of coffee isn’t any kind of villain, so called energy drinks, sodas, and many other items contain added caffeine that adds to problems such as sleeplessness, tremors and so on.

5. Sodium nitrate – It is known to have carcinogenic impacts and is best avoided.

7. Olestra – It was at one time touted to be the great kind of fat that the body did not absorb but excreted without storing. However the unpleasant side effects of olestra make this another one of the additives to avoid.

8. Aspartame – It is the artificial sugar substitute that you really don’t need in your diet. Not only is there an unpleasant aftertaste, it is implicated in problems such as lupus, MS, Parkinson’s, migraines and seizures.

9. Phthalates – They are a synthetic hormone that is often found in canned foods and is thought to interfere with the endocrine systems and cause other health problems.

10. Fortified foods – If it says fortified, it has probably been processed and refined so extensively as to lose most of its nutritional value. They then added some of that nutritional value back and call it fortified.