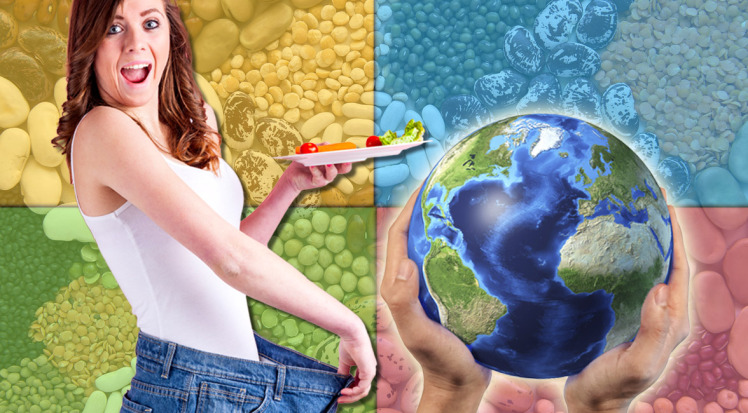 Here’s a healthy idea for your New Year resolutions – going vegan! This post from Metro.co.uk has put together 12 reasons to inspire you to become a vegan in 2016.

Join the gym. Drink less. Take the stairs. Save money.

There’s nothing like the start of a new year to inspire healthy resolutions.

But of all the New Year’s resolutions to make, here’s why going vegan is the best.

1. You won’t have to squeeze into those too-tight jeans

Sure, there are overweight vegans, just as there are skinny meat-eaters but, on average, vegans are about one-tenth as likely to be obese.

Once you replace high-fat animal-derived foods with healthy fruits, veggies and grains, it becomes a lot harder to pile on the pounds.

In one recent study of people who were trying to lose weight, vegans lost on average 2.52kg more than their meat-eating counterparts.

2. It’s the best way to help the planet

Stopping climate change is a pretty major priority for the human race right now – and the UN says we can do it by going vegan.

Why? Because meat production is a leading cause of climate change as well as water depletion, soil erosion and other environmental problems.

Increased demand for vegan options means that you can eat vegan just about anywhere.

Wetherspoon’s sweet potato and chickpea curry, Pizza Express’ Pianta Pizza and Nando’s Veggie Pitta (ask for it without mayo) are just the tip of the iceberg.

4. It’ll open you up to a new world of culinary delights

When you go vegan your focus moves from meat to a range of grains, legumes, and vegetables you may not even know existed.

5. You don’t even have to step foot in the kitchen if you don’t want to

If cooking isn’t your thing, food delivery services like Give Kitchen delivers nutritionally balanced prepared vegan meals to your door.

6. You don’t actually have to give up anything

From vegan cheese slices to juicy veggie burgers to creamy non-dairy ice creams (all available at Tesco, I might add), you just have to replace the foods you know and love with readily available vegan versions – simple!

7. Because an animal’s life is worth more than a fleeting moment of taste

Chickens need their wings, and pigs don’t have spare ribs.

They are not nuggets or burgers.

8. It could help the nearly 800 million people on Earth who are starving

Using vast amounts of land, water and other resources to grow grains to feed animals who are then used for food is totally inefficient.

All that grain could be used much more efficiently if it were fed directly to people.

In theory, the more people who go vegan, the better able we’ll be to feed the hungry.

9. It’s violence you can stop

We may feel powerless to stop war or other forms of violence, but we can help spare animals a lifetime of suffering and a terrifying death just by leaving them off our plates.

From Liam Hemsworth to Morrissey to former US Vice President Al Gore, the list of stars who are dropping animal flesh from their diets is growing by the minute.

11. It can help save the rainforests

Farming animals for their flesh takes a terrible toll on the world’s rainforests.

Livestock production is a key factor in deforestation, especially in Latin America, where vast swaths of rainforest land have been cleared for cattle grazing.

12. A fitter, healthier, happier you

Increased sense of well-being and a total absence of guilt about what you’re eating – tick.

via New Year resolution ideas: 12 reasons to become a vegan in 2016