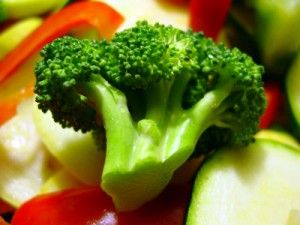 It’s not always easy to eat the right things. So when you fill your plate with wholesome food, it pays to make sure you’re getting the most nutritious foods.

Romaine lettuce is good for you, for example, but swapping it for one of the more nutritious vegetables like spinach or kale, with their dark, leafy greens, is even better. That’s because some foods are nutritional powerhouses, with more vitamins, minerals and disease-fighting antioxidants than others.

Like an exercise routine, your diet has to be something you can stick with and enjoy.
Here are the top 10 expert-recommended foods and ways to pack the most nutrients onto your plate.

1. Broccoli
Few vegetables are as divisive as broccoli, which was on former President H.W. Bush’s do-not-eat list. Either you love it or hate it — and researchers have even studied the reasons why.

Here’s a clue: If your parents don’t like the green stuff, chances are you won’t. Of course, that doesn’t mean you can’t find a tasty way to incorporate it into your diet.

Why it’s a good food for women: Cruciferous veggies like broccoli, cauliflower and Brussels sprouts pack a serious punch against cancer.

In lab studies, sulforaphane, a chemical found in broccoli and its cousins, actually made cancer cells like leukemia and melanoma self-destruct. A 2007 Chinese study found that the compound may slow down the spread of breast cancer.

One cup of broccoli also boasts a whopping 135% of your daily vitamin C needs.

Where to get it: Frozen or fresh, broccoli is easy to come by year-round. To get the most out of your super veggie, try to eat it raw or lightly steamed — cooking kills off most of its vitamin C.

If you’ve inherited the “I hate broccoli” gene, indulge in cauliflower instead.

2. Beets
Don’t let the color scare you: These crimson root vegetables are sweet, rich and buttery. And the nutritional value these red devils pack is so great, you should get to know them better.

Why it’s a good food for women: A 2008 American Heart Association study reported that beet (otherwise known as beetroot) juice is a superstar at bringing blood pressure down. Even if you don’t feel like you’re at risk for high blood pressure, you will be. One in three Americans has hypertension and 90% will get it in their lifetime. High blood pressure can damage your arteries, which can lead to plaque buildup, heart disease, blood clots and strokes.

According to Jonny Bowden, Ph.D., author of The 150 Healthiest Foods on Earth, beets are loaded with potassium, which counteract the effects of our salt-heavy diet.
They’re also high in folate, which we need to manufacture new cells and prevent DNA damage (a precursor to cancer).

Beet juice may also boost workout stamina by 16%, making exercise feel less tiring so you can go for longer, according to a 2009 English study. The chemicals in beets also show great promise in combating cancer and inflammation.

Where to get it: Find beets and beet juice at your local grocer. It has a distinctive, earthy taste and mixes well with other juices, like cranberry. Canned beets are much easier to come by.

A great way to serve them up: Toss into an arugula salad with goat cheese and walnuts, and drizzle with balsamic vinaigrette and cracked pepper.

3. Turmeric
Spice up your meals with turmeric. Most often found in yellow curry dishes, turmeric is a member of the ginger family.

Why it’s a good food for women: Curcumin, a plant nutrient that gives turmeric its deep golden hue, has long been used in Eastern medicine to treat infections and help speed wound healing.

Regions of India with the highest regular consumption of turmeric have the lowest rates in the world of Alzheimer’s disease.

The body can absorb only a fraction of the curcumin we eat, but adding black pepper may boost our system’s ability to use it by 2,000%, according to Indian researchers.

Where to get it: Look for turmeric in your supermarket’s spice aisle. It costs about $4 per bottle. If you’re lucky enough to live near a “little India,” you can find turmeric in bulk for much cheaper. Or use curry powder, which contains large amounts of the super spice.

4. Kale
Kale is part of the broccoli, or brassica, family. So if you’re broccoli-phobic, but want to reap its benefits, learn to love these leafy greens.

Why it’s a good food for women: Not only does it do a number on cancer, it also helps the heart. Half-cup of kale juice per day can jack up helpful HDL cholesterol by 27% and lower artery-clogging LDL in just 12 weeks.

Kale is loaded with vitamin C, which is great for your complexion, along with calcium and vitamin A. Leafy greens also contain nutrients — carotenoids such as lutein and zeaxanthin - that help preserve vision and prevent eyestrain, a serious asset for those who stare at a computer screen all day.

Where to get it: You probably breeze right by kale every time you wander through the produce aisle. It’s sitting next to those other leafy greens you’ve probably never tried, like collard, mustard, and turnip greens and Swiss chard.

Kale is delicious steamed, with pepper and garlic, or try it raw as a wrap instead of tortilla or pita.

5. Blueberries
This superfruit needs no introduction. The berries are so common in the U.S., you might have grown up picking them right off bushes in your backyard.

Anthocyanidins, the chemicals that give blueberries their color, have hit the spotlight recently for their purported health benefits.
Though still being studied, plants with these super-antioxidants have anti-inflammatory powers that may lower the risk of heart disease, diabetes, arthritis and protect against mental decline, according to various studies about their nutrition value.

Acai, a Central American newcomer to the U.S., is a blueberry relative and just as good for you, but they’re expensive and hard to find.

Where to get it: Blueberries can cost less than $2 a pound in summer, but then skyrocket in winter. To save money, buy them in bulk when they’re cheap and freeze them to use year-round.

6. Black beans
Found most often in Mexican cuisine, black beans are more popular than ever in the U.S.

Why it’s a good food for women: Beans hit it out of the ballpark when it comes to nutrition as they’re loaded with the essential minerals, folate, magnesium and iron.

Beans are the only food that crosses two categories on the food pyramid, they’re both a complex carbohydrate and a protein source.

People who regularly consume beans have better weight management and blood sugar regulation. That’s because of their soluble fiber.

Black beans, in particular, have three times the amount of omega-3 fats than other beans, and their dark skin contains cancer-fighting chemicals called flavonoids.

Where to get it: Canned beans are, by far, the most convenient – and they’re relatively cheap at 80 cents a can. But with a little planning, dried beans can save you even more money and aren’t too labor-intensive.

Simply cover dried beans with water in a large bowl, let sit overnight with a bay leaf or two, drain, and voila! Your fresh beans are ready to cook.

7. Tart Cherries
Don’t confuse tart cherries with the sweet black cherries usually found in the supermarket produce aisle. This fruit is most often used in baking and comes frozen, canned or as juice.

Why it’s a good food for women: Tart cherries are anti-inflammatory superstars and may be great for managing pain.
They’ve long been used to treat arthritis and gout symptoms. Research in animals and humans suggests they can help relieve arthritis and post-workout muscle soreness, lower cholesterol and possibly even reduce body fat, according to a 2009 University of Michigan study.

Where to get it: Your cheapest bet: Buy them canned in the baking aisle. Tart cherries have the same zippy flavor as cranberries and taste good in smoothies or mixed with other fruits.

8. Almonds
Almonds have been around since Biblical times, and are a staple in the heart-healthy Mediterranean diet. Mild and versatile, the nuts work well in sweet and savory dishes.

Why it’s a good food for women: These days, nearly every packaged food - from yogurt to breakfast cereal – claims it’s loaded with probiotics, helpful bacteria that promote healthy digestion and a strong immune system.

Prebiotics are non-digestible food parts that create probiotics when they pass through your intestines. Almonds, along with other high-fiber foods, belong to this category and may play a role in improving stomach problems, like irritable bowel disorders and diarrhea, and boosting calcium absorption.