Antioxidants are found in Nature in compounds that are particularly rich in hydrogen and excess electrons. These hydrogen-rich and electron-rich compounds are usually visible to our eye as pigments of color in plants.

The richly pigmented plants prove to be the easiest way to discover and track down where real antioxidant values are to be found. Superfoods ranging from cacao to acai to goji berries to spirulina to blue-green algae to marine phytoplankton all contain extraordinarily-rich antioxidant content.

Antioxidants can be water or fat soluble. All raw, pure fats and oils are antioxidants as they contain excess electrons. That means, that not only are richly-colored foods loaded with antioxidants, but so are all raw olives, avocados, nuts, and seeds.

Antioxidants are known to stop runaway free radicals. Free radicals behave like bad drunks because they create problems in every cell they touch. Free radicals are aggressive oxygen molecules that oxidize and damage tissue. Free radical damage has been implicated in numerous symptoms ranging from skin wrinkles all the way to cancer.

Not only are antioxidants capable of quieting free radicals, some antioxidants have medicinal value. The xanthone antioxidants in the rind of the mangosteen fruit are known to fight the organisms that cause rheumatism and arthritis better than any other known botanical substance. The blue-pigment antioxidants in blue-green algae help increase the natural production of stem cells. For these reasons both of these antioxidants have been combined into a dynamic popular antioxidant formula we created called Blue Mangosteen.

Vitamins A, C, and E are considered antioxidants. Vitamin A is a metabolite of beta-carotene, a red pigment commonly found in plants (e.g. goji berries, carrots, etc.). Vitamin C is a well-known antioxidant with a tremendous volume of research behind it. We believe that natural vitamin C sources (Camu berry) instead of simply ascorbic acid are best. Vitamin E has undergone substantial revision in recent years as its antioxidant value varies with quality and type (tocotrienols or tocopherols). Tocotrienols are more powerful Vitamin E antioxidants than tocopherols.

Some atomic minerals, such as zinc and selenium, are considered antioxidants, but they are not capable of antioxidant action by themselves. These antioxidant minerals must work in conjunction with antioxidant enzymes in order to be effective.

The only known atom that acts independently as an antioxidant is hydrogen. Hydrogen neutralizes free radicals instantly (and completely) with no byproducts leftover except water. Dr. Flanagan’s MegaHydrate (a hydrogen supplement) has an ORAC score approximately ten times higher than any known food thus making MegaHydrate perhaps the world’s strongest antioxidant supplement.

The ORAC score is a scientific standard that determines which foods or substances have significant antioxidant values. The higher the ORAC score, the greater is the substance’s power as an antioxidant. ORAC scores increase as substances are reduced to powders because the surface area increases making the antioxidants more available. Rudolf Steiner believed, as did the great Vedic herbalists, that you could increase the value of an herb or food by properly drying and powdering it. No doubt, that they intuitively understood that by properly drying and powdering a substance you increase its antioxidant value making the substance even more effective. 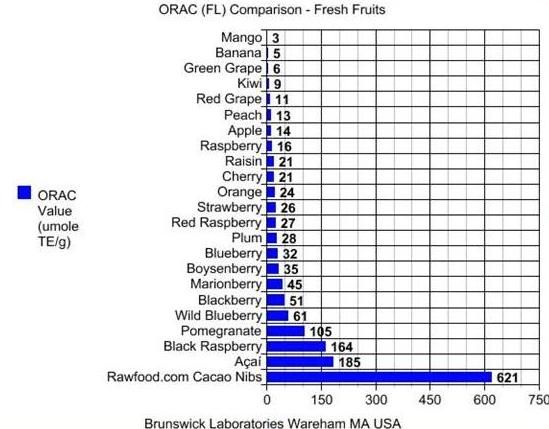 In 2007, a colleague and I took a trip to Hort Research in New Zealand. Hort is the preeminent antioxidant research facility in the world. There, the scientists explained to us that not only are the ORAC score important, what is perhaps even more valuable is how well the antioxidants present in the foods are absorbed into the blood stream. They told us that their evidence indicates that consuming cacao with berries may triple the absorption of the antioxidants (found in both foods) into the blood.

To be clear, based on the evidence supplied by Hort Research, superfoods like cacao and goji berries or cacao and acai or cacao and camu berry when combined in smoothies or snacks create a synergistic effect thus increasing the utilization of the antioxidants. This is one more piece of evidence indicating that the habit of combining unique superfood ingredients in smoothies or snacks is being increasingly validated by science.

Tocotrienols (The Best Vitamin E Ever)