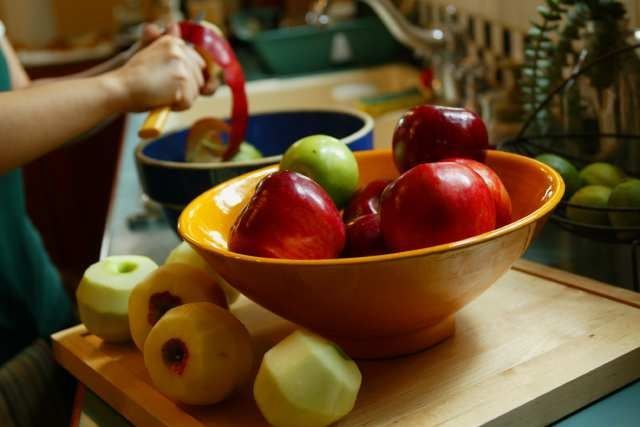 They may be red and shiny, but apples are the most pesticide-laden fruit, according to the “2011 Shopper’s Guide to Pesticides in Produce” released Monday by the Washington-based Environmental Working Group. Of  700 apple samples tested by the U.S. Department of Agriculture, 98% contained pesticides, moving the fruit to the top of the group’s “dirty dozen” list, it said.

The group’s president, Ken Cook, acknowledged that some consumers do not have access to organic produce grown without pesticides, or cannot afford its higher price. The guide, he said, “helps consumers … to make better choices among conventional produce, and lets them know which fruits and vegetables they may want to buy organic.”

Pesticides can be toxic to human health and the environment.  In a May 6 letter to the U.S. Department of Agriculture, the U.S. Environmental Protection Agency and the Food and Drug Administration, leading physicians and public health experts urged the government to release the latest data on pesticide residues on produce frequently eaten by babies and children.

“Three recently published studies have all shown that early life exposure of children to pesticides can cause persistent problems in learning, memory and behavior. One of these studies, led by Brenda Eskenazi of the University of California, Berkeley, found that children born to mothers with the most intense exposures to pesticides demonstrate IQ deficits of up to seven points.”

To create the shoppers guide, the Environmental Working Group collected test results from the USDA and the FDA from 2000 to 2009. Using six factors that reflect how many pesticides were found, the produce was ranked based on a composite score. Most samples were washed and peeled before being tested, so the rankings reflect the amounts of the chemicals likely present on the food when it is eaten.

Karl Tupper, staff scientist with the San Francisco-based Pesticide Action Network, praised the guide as  a “very useful tool.” He added, however, that because much of the pesticides are washed off before the produce reaches stores, “It’s the farmers, farm workers and residents of rural communities who are really most at risk.”

The survey did not cover soil fumigants. A coalition of farm worker and environmental  groups has filed suit against the California Department of Pesticide Regulation to ban methyl iodide, a fumigant listed as a carcinogen by the state. Laboratory tests on animals have linked methyl iodide to miscarriages, cognitive impairment and thyroid toxicity.

Sarah Schiammacco, a spokeswoman for Environmental Working Group, said that while methyl iodide is quite toxic, it would be  unlikely to remain as a residue because it is used before planting.  But it is considered to be a risk to farm workers and neighboring communities because of its potential to drift off site through the air, and to contaminate groundwater.