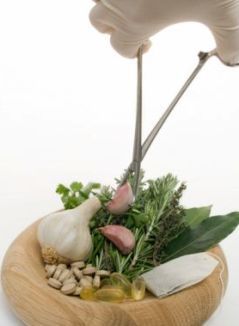 Many of us see the words “all natural” on a label and immediately get a warm, fuzzy feeling that the product we are considering will be something good for us. But, we should not assume that just because something is natural that it is safe.

Herbs are a time-honored approach to health and well- being. However, there are thousands of poisonous plants on the planet.

Some are even used in medicine. There are certain common herbs to be aware of that should be avoided because of the toxins herbs contain.

Also known as monkshood, aconite is a standard homeopathic medicine, but should be taken internally only under the direction of a trained health care professional.

Undiluted, it can cause numbness and tingling, nausea and vomiting, slow labored breathing, and eventually death.

Herbal aconite is mainly used as an external remedy for sore muscles, bruises, arthritis and rheumatism. It can be found over the counter in creams and lotions. Do not take orally unless in homeopathic form.

Belladonna means beautiful woman, but do not be fooled by its name. It also goes by the name deadly nightshade, and is extremely poisonous. It is commonly used as a homeopathic remedy for fevers.

However, homeopathic medicines are highly diluted, have no known side effects, and are generally considered safe for consumption.

Undiluted, belladonna induces a deep sleep. But eating nightshade berries are not the only way one can be poisoned by this common herb. The leaves, stems and berries should not be handled, especially if you have a cut or abrasion on your hands.

It is native to Great Britain and grows mainly in shady, wooded areas.

Blood root gets its name from the red juice produced by the plant’s root. While it sounds foreboding, the plant is only toxic in large quantities. An overdose of blood root results in nausea, vomiting, extreme thirst and dizziness.

Managed amounts are used to treat bronchitis, nervousness and heart palpitations. It is also believed to be effective against certain types of cancer. It does contain opiates and should only be used under the direction of a trained health care practitioner.

Foxglove is a bright perennial flower long prized for its medicinal value. Its main chemical component, digitalis, is the origin of the heart remedy digoxin (pharmaceutical name Lanoxin). Topically, it is used to treat bruises and fresh wounds.

When consumed, its effects are cumulative, meaning they build up over time. Signs of an overdose of foxglove begin with dehydration, progressing to headaches, and eventually cardiac arrhythmias and even heart attack. Do not take this herb unless directed to do so by a medical doctor.

Gelsemium grows throughout North America and is more commonly known as yellow jasmine. You may recognize gelsemium as another homeopathic remedy. It is commonly used by homeopaths to treat sore throats, colds and fevers associated with the flu.

Once again, however, you do not want to consume this herb in its pure, undiluted state. It causes paralysis of the spinal cord, shutting down the respiratory system, leading to death by asphyxiation. Although it is a beautiful flowering plant, avoid its juicy fruit pods, glossy leaf clusters and fragrant blossoms.

Do not confuse this sweet looking flower with its cousin, Roman chamomile, commonly used in herbal teas to help induce sleep and relaxation. It also goes by the name False Hellebore, and is a flowering plant which looks similar to a buttercup, but is not used as an herbal remedy.

Its main active ingredient, adonidin, has a similar action to digitalis, and as such, should be avoided. Overdose quickly produces vomiting and diarrhea.

Hemlock is actually part of the parsley family and looks relatively benign. However, looks can be deceiving. This plant is so poisonous, that even a few drops from the fresh leaves or fruit can be fatal.

Because it looks similar to parsley or fennel, it may easily be confused with these culinary herbs. It is found mainly growing wild in meadows and fields of European countries.

This ancient poison is more commonly referred to today as Nux Vomica. This unpleasant-sounding plant was once used as an execution solution. The bitter seeds are used to produce the powder we refer today as strychnine poison or rat poisoning.

Like gelsemium and belladonna, it should only be used in homeopathic form. Strychnine overdose causes violent convulsions and eventually death. If consumed, seek medical attention immediately.