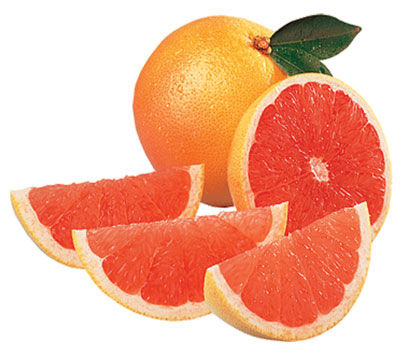 Named for the way the fruit hangs in bunches (like grapes), the grapefruit is a nutritious member of the citrus family. It comes from sunny Barbados and is thought to be the result of the natural cross pollenization between the orange and the Asian pomelo. Today the greatest quantity of grapefruits is produced by the United States, followed by China and South Africa.

Here are amazing health benefits of grapefruit that may make you want to include it in your diet on a regular basis.

Rich in Vitamin C
Being a member of the citrus family, grapefruit is also a great source of vitamin C, the great immune system supporter. As such, it is recommended against the common cold, for many studies have indicated that vitamin C relieves the severity of cold symptoms. As a powerful antioxidant, vitamin C protects our bodies against oxidative stress caused by free radical damage and the inflammation associated with asthma and arthritis.

Oxidative stress can also cause a number of other severe medical conditions, such as heart disease and stroke, and has been connected to a host of cancers, such as mouth, throat, lung, stomach and colon. Vitamin C also helps to replenish the amount of vitamin E in the body.

Prevents Arthritis and Works as an Antiseptic

Grapefruit contains salicylic acid that helps break down the body’s inorganic calcium, which builds up in the cartilage of joints and may lead to arthritis. If you have arthritis, try drinking grapefruit juice with apple cider vinegar. You will notice a reduction in your arthritis symptoms.

The salicylic acid in grapefruit also works as a powerful antiseptic. In addition, grapefruit seed extracts can be added to water to make an antiseptic spray for treating bacterial and fungal infections.

Prevents Kidney Stones
Grapefruit contains a compound called d-limonene that prevents the formation of and dissolves renal stones. One study from the British Journal of Nutrition found that women drinking a half a liter to a liter of grapefruit juice every day lowered the pH levels of their urine, thereby decreasing the risk of developing kidney stones. However, if you are already being treated for kidney problems, grapefruit juice may impede the effectiveness of any medications you may be taking.

Cancer Prevention
Grapefruit is rich in antioxidants such as vitamin C, a powerful ally in the fight against free radicals that cause oxidative stress. Oxidative stress is associated with many different types of cancer. Studies have shown grapefruit juice to be effective against lung cancer by impeding an enzyme that activates cancer-causing chemicals. In colon cancer it encourages the suicide (apoptosis) of cancer cells and the production of healthy cells. Recent study conducted by researchers at UCLA and Zhongshan University in China discovered that Naringenin, a beneficial plant compound in grapefruit, helped repair damaged genetic material (DNA) in human prostate cancer cells. DNA repair is an important factor in cancer prevention since it stops cancer cells from multiplying. Scientists noted that DNA repair by Naringenin might contribute to the cancer-fighting effects associated with a diet high in fruits and vegetables.

Lycopene is a carotenoid that gives grapefruit its red color and another antioxidant in its arsenal. A group of phytonutrients in grapefruits called limonoids help prevent tumors by promoting an enzyme that causes the liver to expel more toxins from the body. Many studies have also shown that limonoids aid against cancers of the mouth, skin, lung, and stomach. The pulp of grapefruits contains glucarates, a type of phytochemical that has been shown effective against breast cancer.

Weight Loss
Grapefruit, which itself is fat free, contains a high number of fat-burning enzymes. Studies have shown them to alter insulin levels, thereby affecting metabolic rates. It’s not sure whether this explains how they cause weight loss, or if there’s something to them that satiates the appetite in some other way, but studies show they do work.

Researches belief that grapefruit is useful in the battle of the bulge. Dr. Ken Fujioka from Scripps Clinic in San Diego conducted a 12-week study of 100 obese men and women and found that consuming one-half grapefruit before meals resulted in an average weight loss of 3.6 pounds with some participants losing up to 10 pounds. Individuals who ate the grapefruit had significantly lower levels of insulin in their blood, which the researchers speculate resulted in the weight loss. The smaller the amount of insulin in the blood after a meal, the more efficiently the body uses food for energy rather than storing it as fat. The researchers further speculated that a natural plant compound in grapefruit, not the fiber content, was responsible for the weight loss since those who consumed grapefruit juice also lost weight despite the lack of fiber.

Skin Health
The high amount of vitamin A in grapefruit endows it with powerful antioxidant properties to combat skin damage caused by oxidative stress. Grapefruit helps maintain adequate moisture levels in the skin, protecting it from dryness, psoriasis, acne, and wrinkles.