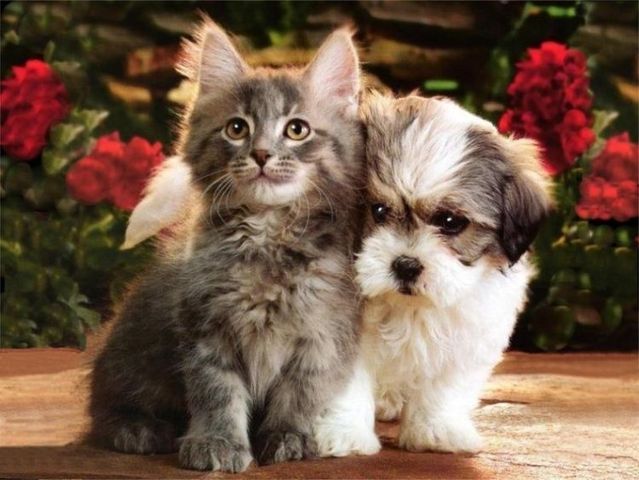 (BeWellBuzz) Science is finding support for what many of us have known all along: owning a pet is good for the soul… and body. The CDC (Center for Disease Control) plainly states that pets can lower blood pressure and cholesterol levels, cure loneliness, increase exercise and improve social life. Just last month the AHA released a scientific statement backing these claims with research. Other research has shown that pet-owners with AIDS are less likely to be depressed than non-owners; that kids growing up with cats and/or dogs, perhaps surprisingly, tend to have fewer allergies and asthma, stronger immune systems, and learn greater responsibility.

Yet another study published in the Journal of Personality and Social Psychology looked specifically at three different conditions to get a more fine-tuned understanding of how pets affect a person’s life. They compared pet owners to non-owners; affectionate vs. less affectionate animals; and observed the healing power of an animal friend after a rejection experience.

217 men and women at a local university, with mean age 31, filled out an approximately 1-hour survey. The questions were geared to determine whether the anonymous participant tended towards depression, loneliness and low self-esteem, or was open to experience, agreeable, conscientious and extraverted. The 50 who didn’t have pets were only assessed for their emotional, mental and social wellness. The others were also assessed regarding their pet relationships. If there was any significant difference between the emotional states of those with and without pets, then researchers knew they could be on to something.

They found roughly two categorical differences between the two groups:

Lastly, in this segment of the research, the team looked at owners only. Those who tended to anthropomorphize, or ascribe human qualities, to their pet companion suffered more depression and claimed less happiness. This could be sort of like ascribing our mean Aunt Jane’s flippancy to the cat’s independence. If we believe the animal is rejecting us in the same way as humans did in our past, then we might project human misbehavior onto them. Interestingly, even this group did not tend to claim loneliness, but mostly a sour mood.

In this second study, we begin with an age-old idea also backed by decades of research; namely, that excellent human social support predicts greater well-being. If my closest relations are affectionate and supportive of me, then I’m more likely to be happy and healthy. Here, they wanted to explore if the same could be said of dogs. That is, can support and affection from one’s dog predict health and happiness?

The answer they found: yes. If the dog was perceived as anti-social, fearful or aggressive, the benefits lagged. But where the dog behaved warmly and fulfilled social needs, the people’s well-being soared.

Also an important finding, the pet benefits were independent of human relations. That means that having a dog, and probably any other affectionate animal-friend, can bring fulfillment and boost wellness even when humans are letting you down.

Happily, as in the first study, there was a positive correlation between pet and people relations. “That is,” the authors concluded, “pets generally complement other forms of social support rather than compete with them (or serve as surrogates when other sources of social support are deficient).”

Most often, having a great relationship with your dog will be conducive to your social life with people. It appears that this bond strengthens self-esteem, increases happiness and promotes health.

Study 3: The Cure for Rejection

Do our animal companions have the power to help us heal from rejection, even as our best friends do? This last study brought pet-owners into the labs, where the team induced loneliness and isolation by having them write about an upsetting rejection experience. L Then they were divided into three groups. Some had to follow the depressing exercise by writing about a best friend, their closest pet, or as a control group, a map of the campus.

The results? Human and non-human friends fared equally in restoring cheer to the participants. According to subsequent questioning, those who drew a map left, sadly, dejected (I really hope they went home to a Fido or a Heathcliff); whereas both other groups were restored to a positive outlook and overall wellness. The team of researchers therefore called the animals “social resources,” with the potential to bring emotional healing and restoration.

If you’ve ever had an affectionate relationship with an animal, whether dog, cat, horse or hamster, I’d bet you could vouch for everything here and more. Scientific studies are sure nice for validation. It could be that the day is upon us when we’ll prescribe a kitten, puppy or chubby little ginny pig before risky anti-depressants. Pet therapy, anyone?

(3) “Pet Ownership and Cardiovascular Risk: A Scientific Statement From the American Heart Association”