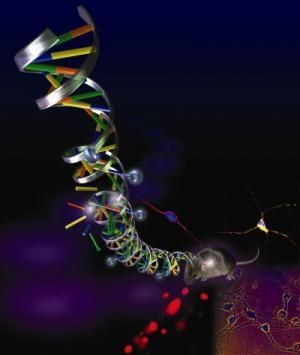 Discovery could shed light on Alzheimer’s, Parkinson’s and other neurodegenerative disorder.

No one knows the cause of most cases of Alzheimer’s, Parkinson’s and other neurodegenerative disorders. But researchers have found that certain factors are consistently associated with these debilitating conditions. One is DNA damage by reactive oxygen species, highly destructive molecules usually formed as a byproduct of cellular respiration. Another is the presence of excessive levels of copper and iron in regions of the brain associated with the particular disorder.

University of Texas Medical Branch at Galveston researchers have discovered how these two pieces of the neurodegenerative disease puzzle fit together, a connection they describe in a review article in the current Journal of Alzheimer’s Disease. A high level of copper or iron, they say, can function as a “double whammy” in the brain by both helping generate large numbers of the DNA-attacking reactive oxygen species and interfering with the machinery of DNA repair that prevents the deleterious consequences of genome damage.

“It’s been suggested that an imbalance of DNA damage and repair produces a buildup of unrepaired genetic damage that can initiate neurodegenerative pathology,” said postdoctoral fellow Muralidhar Hegde, lead author of the paper. “We don’t yet know enough about all the biochemical mechanisms involved, but we have found multiple toxic mechanisms linking elevated iron and copper levels in the brain and extensive DNA damage — pathological features associated with most neurodegenerative disorders.”

Humans ordinarily have small amounts of iron and copper in their bodies — in fact, the elements are essential to health. But some people’s tissues contain much larger quantities of iron or copper, which overwhelm the proteins that normally bind the metals and sequester them for safe storage. The result: so-called “free” iron or copper ions, circulating in the blood and able to initiate chemical reactions that produce reactive oxygen species.

“Reactive oxygen species cause the majority of the brain cell DNA damage that we see in Alzheimer’s and Parkinson’s disease, as well as most other neurodegenerative disorders,” Hegde said. “It’s bad enough if this damage occurs on one strand of the DNA double helix, but if both strands are damaged at locations close to each other you could have a double-strand break, which would be fatal to the cell.”

Normally, special DNA repair enzymes would quickly mend the injury, restoring the genome’s integrity. But experiments conducted by Hegde and his colleagues showed that iron and copper significantly interfere with the activity of two DNA repair enzymes, known as NEIL1 and NEIL2.

“Our results show that by inhibiting NEIL1 and NEIL2, iron and copper play an important role in the accumulation of DNA damage in neurodegenerative diseases,” Hegde said.

The researchers got a surprise when they tested substances that bond to iron and copper and could protect NEIL1 from the metals. One of the strongest protective agents was the common South Asian spice curcumin, which also has been shown to have other beneficial health effects.

“The results from curcumin were quite beautiful, actually,” Hegde said. “It was very effective in maintaining NEIL activity in cells exposed to both copper and iron.”