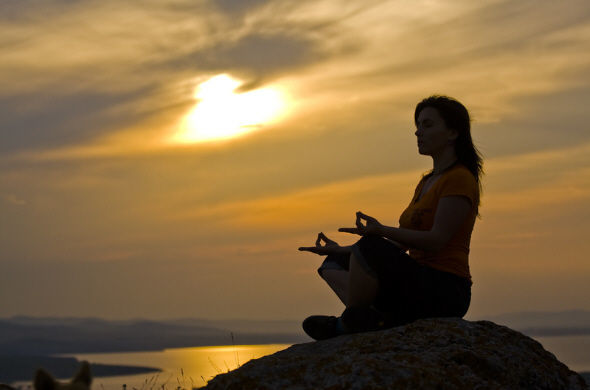 (BeWellBuzz) Meditation is a century’s old practice of relaxing the mind, improving thought power and exercising both the body and soul. Meditation comes down through so many religious beliefs as well such as Buddhism and Hinduism. It can also be termed as a global practice because it is common within all religion, countries and cultures.

What exactly is meditation anyway?

According to Rob Nairn (the author of the book ‘What is Meditation?’) : “It [Meditation] is a highly alert and skillful state of mind because it requires one to remain psychologically present, and with whatever happens in and around one, without adding to or subtracting from it in any way.”

So many scientific experiments have been carried out for years to find out the influence ‘Meditation’ has on the human brain.

According to a popular research at UCLA Laboratory of Neuro Imaging, Eileen Luders, the Assistant Professor discovered that people who meditate more tend to process information faster than people who don’t meditate.  This study also showed that there was a deep connection between processing of information faster (called gyrification in medical terms) and years of meditation. This research was written in the online edition of the journal Frontiers in Human Neuroscience.

In medical terms, meditation folds the cortex which is the outmost layer of the neural tissue. This cortex plays a central role in memories, attention, thought and consciousness. The folding of the cortex creates narrow furrows and folds in the brain called sulci and gyri which ultimately stimulates mind processing tenfold. The more you meditate, the more the folding action will occur causing a boost in your memorizing skills, decision making, solving complex problems etc.

To confirm their research, Luders and the team carried out an experiment with 50 meditators, out of which 28 were men and 22 women and compared them to non-meditators of the same characteristics. The meditators were meditating since 20 years using various meditating practices like Samatha, Vipassana, Zen, etc. There was a huge difference between the different parts of the cortex suggesting that the longer a person meditates, the more the folding occurs, and the more the mind gets active and disciplined.

People are often astonished by the wisdom of yogis, but the fact is – this wisdom comes from years of meditation. If you want, you can also carry out this experiment on yourself by meditating for a few days and then observing your brain power.

It is no surprise why students in difficult fields are asked to meditate every day for an hour to advance their learning power. Often called as ‘Mental discipline’, meditation may take years to master. Gone are the days when you would only hear about priests or pundits being meditators. According to a study by the U.S Government in 2007, 9.4% of U.S. adults (over 20 million) had practiced meditation within the past 12 months, up from 7.6% (more than 15 million people) in 2002. There are many people who are seeking meditation as a natural exercise to strengthen their mind.

Meditation in Relation to Brain Activation

The most established research on meditation began in the 1960s when over 1000 published research articles stated that meditation has deep relationship with metabolism, blood pressure and brain activation. It has also been used as a thriving therapy for reducing stress and overcoming pain. Meditation gets rid of negative emotions like anger, fear, hatred etc. When a person is free from all these thoughts, his mind gets to think more clearly and focuses itself on one goal. Even doing a 10 min meditation session every day can do wonders for your mind.

Meditation is also very effective for reducing anxiety and depression. Depression, which is bringing so many to asylums, can be solved if meditation is used as a therapy. Researchers at Harvard Medical School wanted to investigate about the brain activity during Meditation. They took MRI scans of volunteers while they were meditating. According to their study, meditation acts on the area of the brain in control of the autonomic nervous system which is in charge of the basic functions of the body like digestion, blood pressure, etc. These body functions are often affected by stress so when a person meditates, he or she may be able to prevent stress related conditions like a heart attack, digestive problems, etc.

Today, everyone is focused towards achieving remarkable success in life, but the first step towards success is effective thought power and science today proves that this can be achieved through meditation. Sometimes, even CEOs of notable companies take time out for meditating. It’s a relaxing and amazing habit to develop and definitely guarantees loads of benefits in regards to gaining success and peace of mind.