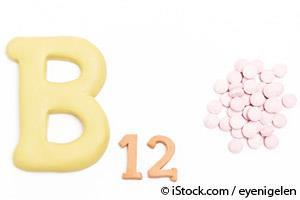 People taking metformin for diabetes or diabetes prevention, for several years, may have an increased risk of vitamin B12 deficiency and anemia. This post from Mercola.com creates awareness about the importance of monitoring your vitamin B12 levels if you take metformin.

New research showed nearly 20 percent of those taking metformin had borderline low vitamin B12 levels which lead to vitamin B12 deficiency.

Vitamin B12 is a water-soluble vitamin that your body does not make, which means you must get it via your diet or supplements. Vitamin B12, along with other B vitamins, is used by your body to convert the carbohydrates you eat into glucose that your body uses for energy.

Vitamin B12 also plays a role in the production of DNA and RNA and works closely with folate to make red blood cells and produce S-adenosylmethionine (SAMe), which is involved in immune-system function and mood.1

Vitamin B12 is also important for the maintenance of your central nervous system, including the conduction of nerve impulses and producing the myelin sheath, which protects and “insulates” your nerves.2

A deficiency in vitamin B12 can be difficult to detect and may lead to numerous, sometimes-irreversible issues with your health, including nerve damage. If you take the diabetes drug metformin, it’s important to be aware that you’re at an increased risk of this potentially serious vitamin deficiency.

Data from participants taking metformin twice daily or those taking a placebo were included, and the participants had their vitamin B12 levels measured after five and 13 years.

Neither the U.S. Food and Drug Administration (FDA) nor the American Diabetes Association formally recommends monitoring vitamin B12 levels in people taking metformin, but the researchers suggested patients ask their doctors to do so.4

How Common Is Vitamin B12 Deficiency?

Studies from the U.S. Framingham trial show nearly 40 percent of the U.S. population may have suboptimal blood levels of vitamin B12, which is a level low enough to experience neurological symptoms.5 Another 9 percent were considered deficient in the vitamin, while 16 percent were near deficient.

It’s often said that vitamin B12 deficiency is more common in the elderly. This is because stomach acid decreases as you get older, and stomach acid is essential for your body to absorb vitamin B12.

However, the Framingham trial found low levels of the vitamin across the board; low levels were common in young people and the elderly alike.6

It should be noted, however, that many symptoms often attributed to aging may actually be due to vitamin B12 deficiency. This includes memory loss, cognitive decline, muscle weakness and more.

Why Low Levels of Vitamin B12 Are Often Missed

Most physicians do not routinely test their patients’ vitamin B12 levels. Even if you have yours tested, the levels considered “normal” in the U.S. may still be too low.

In fact, if your levels are below 600 pg/mL, you might be suffering from B12 deficiency. Integrative medicine practitioner Chris Kresser explains:8

“In Japan and Europe, the lower limit for B12 is between 500 to 550 pg/mL, the level associated with psychological and behavioral manifestations such as cognitive decline, dementia and memory loss.

Some experts have speculated that the acceptance of higher levels as normal in Japan and the willingness to treat levels considered ‘normal’ in the U.S. explain the low rates of Alzheimer’s and dementia in that country.

Experts who specialize in the diagnosis and treatment of B12 deficiency, like Sally Pacholok, R.N. and Jeffery Stuart, D.O., suggest treating all patients that are symptomatic and have B12 levels less than 450 pg/mL.

They also recommend treating patients with normal B12, but elevated urinary methylmalonic acid (MMA), homocysteine and/or holotranscobalamin (other markers of B12 deficiency).”

The Signs and Four Stages of Vitamin B12 Deficiency

There are four stages of vitamin B12 deficiency:

The symptoms also progress in stages. Some of the initial signs of B12 deficiency include unexplained anemia and neuropsychiatric disorders, and gastrointestinal disorders such as Crohn’s disease or infection with Helicobacter pylori.

If you are also elderly or a vegetarian and have some of these symptoms, a B12 deficiency may also be suspect for causing these problems.

Low levels can also lead to mental fogginess, memory troubles, muscle weakness, and — one of the hallmark signs — fatigue. Vitamin B12 also plays a role in:

Vitamin B12 for Bone Health

Accumulating research also suggests low levels of vitamin B12 may wreak havoc on your bone health.

Research published in the New England Journal of Medicine (NEJM), for instance, revealed that mice deficient in vitamin B12 have growth retardation and fewer osteoblasts (cells responsible for bone formation).9

The researchers suggested that lack of vitamin B12 may interfere with growth signaling in the liver and its “downstream effect” on the osteoblasts. Meanwhile, low vitamin B12 status may increase the risk for bone fractures in older men.10

Older women with low levels of vitamin B12 (below 208 pg/ml) also experienced significantly more rapid bone loss in the hips — a sign of osteoporosis — than women with higher levels of B12 in a separate study11 A meta-analysis even found that raising vitamin B12 levels in older individuals lead to a reduction in fracture risk.12

Vitamin B12 Is Crucial for Mental and Cognitive Health

Vitamin B12’s role in brain health and mental health is particularly significant and can cause a range of neurological disturbances that mimic depression, dementia and confusion, as well as serious mental illness .

According to a small Finnish study published in the journal Neurology, people who consume foods rich in vitamin B12 may reduce their risk of Alzheimer’s disease in their later years.13 For each unit increase in the marker of vitamin B12 (holotranscobalamin), the risk of developing Alzheimer’s was reduced by 2 percent.

Meanwhile, B-group vitamins may slow brain shrinkage by as much as seven-fold in brain regions specifically known to be most impacted by Alzheimer’s disease.14 Among participants taking high doses of folic acid and vitamins B6 and B12, blood levels of homocysteine were lowered, as was the associated brain shrinkage — by up to 90 percent.

Who Is Most at Risk of Vitamin B12 Deficiency?

If you’re a vegan who does not eat animal products, you are at high risk of deficiency, as vitamin B12 is available in its natural form only in animal food sources. This doesn’t necessarily have to be meat — eggs and dairy are options also. Top foods to include are:

Children fed a vegan diet may continue to be deficient in the vitamin for years even after animal foods are added to their diet. It’s extremely important for kids to receive adequate levels of vitamin B12 during these formative years. One study found children fed a vegan diet up until the age of 6 who had marginal vitamin B12 status may have impaired cognitive performance as adolescents.15

As mentioned, when you get older the lining of your stomach gradually loses its ability to produce hydrochloric acid (the stomach acid suppressed by proton pump inhibitors), which releases vitamin B12 from your food. If you’re over 50, it’s safe to assume you are not absorbing vitamin B12 at an optimal level. Other factors may also influence your body’s ability to absorb vitamin B12 properly, including:

In general, those most at risk of vitamin B12 deficiency include:

Oral Vitamin B12 Supplements Are Difficult to Absorb

Many people, including the elderly, those with gut disorders and vegetarians and vegans, could benefit from adding extra vitamin B12 to their bodies. There is one problem with supplementation however, which is the poor absorbability of oral vitamin B12 supplements.

Vitamin B12 is the largest vitamin molecule known. Because of its large size, it is not easily absorbed passively like most supplements, making many, if not most, oral B12 supplements are grossly ineffective. This is why vitamin B12 is often given via injection, especially for people with absorption issues. Sublingual (under your tongue) sprays are also effective, as they allow the large B12 molecule to be absorbed directly into your bloodstream.

During the three-year Diabetes Prevention Program study, lifestyle interventions were found to be more effective than metformin at preventing or delaying the development of diabetes. A follow-up study monitored the group for 15 years — and lifestyle interventions were still more effective than metformin at preventing diabetes.16

Such lifestyle interventions also work for treating and reversing diabetes, which should be welcome news for those looking to avoid the increased risks of B12 deficiency that may come with taking metformin long-term. You can find my recommended diet and exercise changes to prevent or treat type 2 diabetes here.

Source: Diabetes Drug Metformin Can Cause Vitamin B12 Deficiency