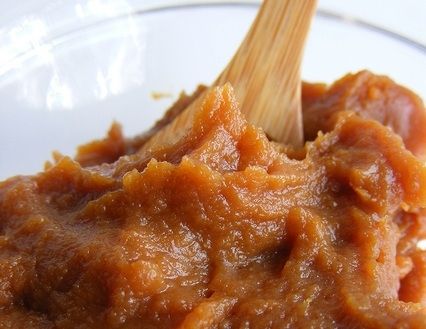 According to Japanese mythology, miso is a gift from the gods. It has been a staple part of the diet in the Far East for centuries. Because it is a fermented, living food; its flavor improves in time, much like a fine wine.

Miso is:
•    fermented paste of soybeans and either barley or rice with salt.
•    a cultured and fermented soy food that helps digestion by  adding  Lactobacillus acidophilus (the good kind of bacteria also found in yogurt)
•    Full of lecithin, linoleic acid, and B12 and is high in protein.
•    Research has also shown miso to be effective in treating some forms of cancer, heart disease and reduce the possibility of developing stomach ulcers.
•    It can slow the aging process which maybe one reason the Japanese are known for their longevity.

Soybeans can be difficult to digest so miso’s fermentation process enables the soybean to be assimilated more easily by the body.

Miso Used as Medicine:
“After studying the use of miso as a preventive medicine Dr. Sinchiro Akizuki of Nagasaki demonstrated that miso plays a part in protecting against the deadly effects of radiation. In 1972, this was confirmed upon discovery that miso contains dipicolonic acid which chelates (attaches to) heavy metals like radioactive strontium and discharges them from the body. Additional research has also shown miso to be effective in treating some forms of cancer, and heart disease.

Miso is a valuable Food
Soybeans are full of high-quality protein and other nutrients, but these nutrients are unavailable to the body when the whole beans are served in their baked, boiled, or roasted forms. When the soybean goes through the process of natural fermentation, they go through a transformation in which almost all of their complex protein, carbohydrate, and lipid (oil or fat) molecules are broken down into readily digestible amino acids, simple sugars and fatty acids.

MISO, ONE CUP A DAY KEEPS THE POISONS AWAY
From being in Japan I experienced that for them a cup of Miso soup in the morning starts the day not a cup of coffee.  It was not that long ago, that the Japanese made their own Miso at home and had pride in their home-made Miso.  Rice and miso are the staples of Japanese diet. The production volume of Miso in Japan is about 600,000 tons and about 3,000 tons are shipped overseas.

The Japanese believe health is dependent on eating habits and we are finally realizing the truth of that. They are known for their longevity in the world and much of this can be attributed to the health benefits from Miso. They have ancient sayings about how Miso helps the body in sayings like “a detoxicating drug in the morning” or “doctor killer”.

Two General Types of Miso Based on Color & Taste

1. Sweet, light coloured miso has been aged for less time, is higher in Koji culture and carbohydrates, milder in taste, lower in salt.
It is good for salad dressings and other summer cooking.
Sweet misos are also ideal for those with delicate digestive systems. A very diluted sweet miso broth can be tolerated by children as young as six months. Genmai, kome, shiro, and sometimes rice are all light misos.
2. Darker miso is aged longer (2-3 years), has stronger flavour, higher salt content and lower koji content. It is higher in protein and stronger in flavour.

“Mellow White” miso is the most popular miso. Light in color and mellow in flavour, Shiro miso is a pleasant way to introduce miso to the first time user. Ideal for soups, dressings and dips. (this is my favorite)

“Brown Rice” miso is very popular in the natural food industry and  has a nutty but mellow flavor.
Made from whole soybeans, brown rice, water, sea salt and koji (Aspergillus orizae), Genmai Miso is a more recent creation, developed particularly for the foreign natural food market.

“Barley” miso is dark in color but mellow in flavor. Made from whole soybeans, pearled barley, water, sea salt and koji (Aspergillus orizae), Mugi Miso was once the most common variety of miso in Japan.  This miso is fermented in wood at natural temperatures for at least 18 months, and because it is made with a slightly higher proportion of barley to soybeans, develops a light sweetness, and is one of the more mellow varieties of substantially aged Barley Miso.

“Soybean” miso is made from soybeans, water, sea salt and a special koji (Aspergillus Hatcho), Hatcho Miso is considered the top quality.

“Rice” miso made from whole soybeans, white rice, water, sea salt and koji (Aspergillus orizae), Kome Miso is one of the most popular misos in Tokyo.

Soybean miso.  Like the Hatcho Miso, Mame Miso is made from soybeans, water, sea salt and koji (Aspergillus orizae), however the mold inoculant is different, and the miso ferments without the extreme pressure used for the production of Hatcho Miso.