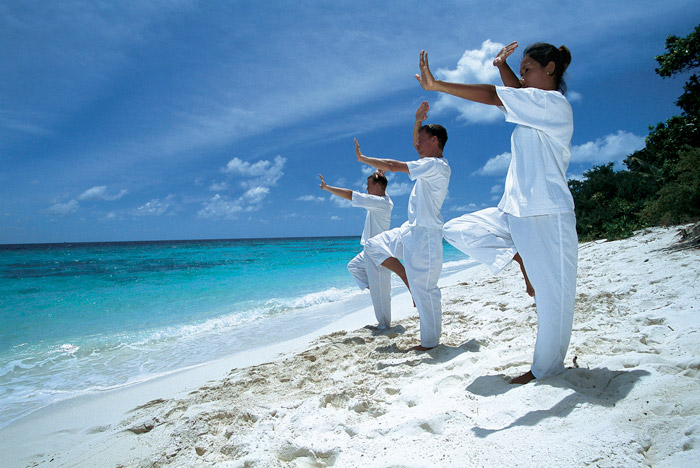 The ancient Chinese practice of Qigong relies upon spiritual and physical exercise to align the body, breath and mind. This post from Core Spirit describes Qigong’s turbulent history, marked with ups and downs in popularity, and its currently shining status.

Marceau Chenault, a French lecturer and researcher at the College of Physical Education and Health of East China Normal University, started learning qigong from a Chinese master in Paris 20 years ago.

It began with an ankle injury. A friend recommended he try the healing properties of qigong, which is spiritual and physical exercise practice intended to align the body, breath and mind. Qigong is widely practiced throughout the world for health, meditation and martial arts training.

“I was really curious about this Chinese practice dealing with energy, or qi,” said Chenault, 36.

He encountered the practice when it was just starting to catch on in Western countries in the 1990s. He started research of qigong at that time.

In 2009, he came to Shanghai to continue research on the evolution of qigong in modern China. At the Shanghai Qigong Research Institute, he helped organize international qigong training.

Chenault said it is often hard for his young Chinese students to understand why some Western people have embraced qigong, in the same way that foreigners often wonder why young Chinese forsake their own heritage to study Indian yoga.

“This is a typical example of a cross-cultural phenomenon that is really interesting to an anthropology researcher like me,” he said. “The way people represent some parts of their own culture, at a special time and place of the history, tells us a lot about the evolution of their society.”

Qigong is an ancient system of deep breathing exercises to move internal energy, called qi. It originated about 4,000-5,000 years ago. Its theory and applications were developed and flourished during the Sui and Tang dynasties. Later, in the Ming and Qing dynasties, a large number of books on qigong were published.

The Shanghai Qigong Research Institute in the Xuhui District is the only official research institute of its kind in China today. It was founded 30 years ago, when there were up to an estimated 200 million people in the country actively practicing the tradition.

At the time, the institute affiliated with the Shanghai University of Traditional Chinese Medicine had more than 100 staff members, twice the current number, according to Li Jie, director of the institute.

Qigong has suffered from trials and tribulations in its long history. It was immensely popular between 1949 and 1965, when it was deemed an effective therapy in the treatment of chronic diseases.

The first professional qigong institution, the Tangshan City Qigong Sanatorium, was established in 1955.

The cultural revolution (1966-76) put a chill in the practice. Qigong was strictly forbidden during that era. After 1979, the practice resurfaced and spread overseas. Despite a slow advance from 1966 to 1979, its resurrection was aided by a qigong report meeting held in 1979 by science, sports and health authorities in Beijing. The meeting was supported by the State Council, China’s cabinet.

However, the second wave of qigong’s popularity ended in the late 1990s, when large numbers of self-proclaimed qigong “masters” claimed to possess “supernatural powers” and started cults that tricked followers into giving them money. Since that unmasking, qigong has dropped into relative obscurity in China once again.

“We are lucky because the tolerance and open-mindedness of Shanghai and local authorities enabled us to survive when most official qigong research institutes across the country were closed,” Li told Shanghai Daily.

Since 1986, the institute has hosted 12 international scientific symposiums to promote the exchange of qigong between China and overseas. The 13th symposium will take place in this summer.

The institute has established a healthcare culture center, which gives qigong classes to overseas students. Last year, about 80 students from France, Germany, Spain, the US, Russia, Canada and other countries attended. They include diplomats, white-collar workers, professors and lawyers.

“Interest by foreigners is very high even if that’s not the case among Chinese here,” Li said.

In France and Germany, qigong is included in the medical insurance systems, and a large number of overseas clinics have been founded. Chenault said some Chinese qigong masters moved to France after the cultural revolution. Since 1997, all qigong associations there hold a national day when they present demonstrations and workshops for the public.

The Shanghai institute is equally trying to reach out to the public. It has been offering free qigong lessons and lectures on the practice to the public every week.

More than 1,500 people have attended the classes since they began in late 2013.

An exhibition hall in the institute displays the history and development of qigong. It is free to the public. The institute also uploads essays and videos on social networking platforms in China.

Li said the time is ripe to restore qigong to its former prominence in China.

During the recent visit of Britain’s Prince William to China earlier this month, President Xi Jinping said China and Britain will sponsor a series of exchanges in martial arts (wushu) and qigong. The institute has received financial support under a three-year traditional Chinese medicine action plan from the Shanghai Health and Family Planning Commission. There has also been financial support from the Shanghai Education Commission.

“The funds are not large, but they are a kind of recognition,” Li said.

She said a shortage of qigong professionals is a current obstacle to popularization. The new generation of 20-somethings doesn’t know much about qigong.

A series of bilingual books on eight forms of qigong and a qigong dictionary are due to be published in the next month or two, she said.

“If you firmly believe in something, you can stick to it, and there is always light at the end of the tunnel,” she said.

“Qigong helps me develop a mental attitude to stay more relaxed, and allows me to more efficiently manage my emotions when I feel anger or sadness,” he said.