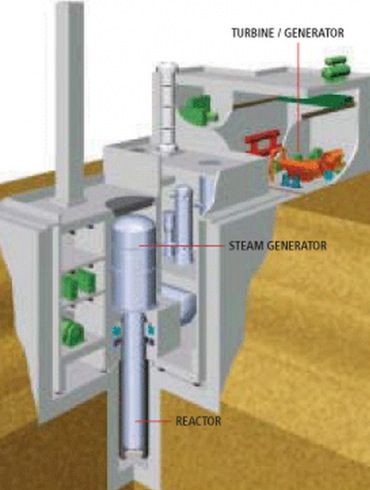 The Japanese nuclear accidents come down to the simple fact that nobody back in the 1960s designed nuclear plants to run for 40 years, then go through an 8.9 earthquake, says[1] blogger Robert Cringely.

Japan now needs increased generating capacity fast. Toshiba’s 4S (Super Safe Small and Simple) reactor cores are like nuclear building blocks, built on a factory production line and transported by truck to be installed 30 meters under the ground. Each 4S puts out 10 megawatts of electricity or enough for 2000 Japanese homes. The 12 lost 1000-megawatt reactors will need 100 4S’s each to replace them, or a total of 1200 4S reactors.

The biggest problem facing the 4S has been regulatory approvals, which would normally take in aggregate 100 times as long (and cost 100 times as much) if done the same way as a larger nuclear plant. The process will have to be streamlined almost to nothing,with a 4S soon stashed under every power substation, giving Japan a smart grid in the process.

Latest posts by www.kurzweilai.net (see all)