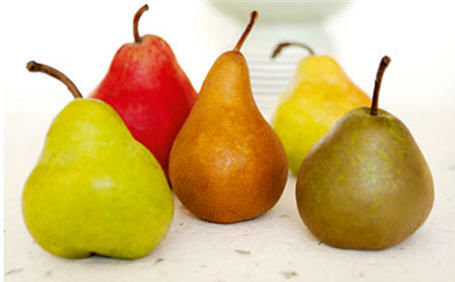 Homer, famous author of the Odyessy, called pears “gift of the gods.” That was in 800 B.C. Thousands of years before and thousands of years later, there are many who would agree. Pears are one of the world’s favorite fruits.

Here are 10 interesting facts about pears that you may not have known.

Pears are such a valuable source of food that people would sometimes include the word Perry in place names to indicate that pears were growing there.

Pears have more nutrients per calorie than calories per nutrient (surprising since they are so sweet). They are a good source of dietary fiber, vitamin C, copper & vitamin K.

Health benefits of pears that may make you want to eat them more often:

Having a strong immune system is essential in fighting off disease and illness. Pears help to boost the immune system because they contain antioxidants such as vitamin C and copper which fight off free radicals and disease in the body.

Preventing and treating osteoporosis is a major concern for many people. Many doctors are now recommending that people who are concerned with protecting the health of their bones maintain a balanced ph and high calcium intake from dietary sources. Fruits and vegetables help to maintain a healthy pH level and pears are a good source of boron, which researchers believe may help the body to retain calcium.

When you eat a pear, your body absorbs glucose, which is converted into energy. Eating a pear can be a great pick-me-up if you feel sluggish in the afternoon.

Pears contain a lot of fiber, which is essential for a healthy digestive system. Fiber helps to keep food moving efficiently through the colon. One medium sized pear contains about 20-25% of the daily recommended intake of fiber. A good percentage of the fiber in pears is insoluble, which may help to reduce the occurrence of colon polyps.

One way to prevent cancer is by eating fresh fruits and vegetables that are high in antioxidants. Pears contain vitamin C, a powerful antioxidant which is an important part of your body’s cancer fighting arsenal. The fiber content in pears is very effective at promoting colon health which will reduce your chances of developing colon cancer.

In order to avoid birth defects, it is important for a pregnant women to consume enough folic acid. Pears contain 10-20 mcg (about 5% of the RDA) of the natural form of folic acid, folate, and they should be included in a healthy prenatal diet.

Pears are considered by some people to be a hypoallergenic food, which is why they are often recommended to people who suffer from food allergies and weaning babies. However, they are not completely hypoallergenic, as some people do have allergic reactions to pears, particularly those people who are allergic to Alder or Birch pollen.

Many doctors recommend pears for babies when they are weaning and being introduced to baby food. This is because pears are a low acid fruit that are unlikely to cause digestion problems in little bellies and because pear allergy is relatively rare.

Removing the skin and heating the pears before pureeing them can make them even easier to digest. Pears are very high in fiber so it’s important not to overdo it or to give pear puree to babies with diarrhea. If you do include the nutrient-rich skins in your baby’s food be sure that they are pureed enough that the pieces do not pose a choking hazard.