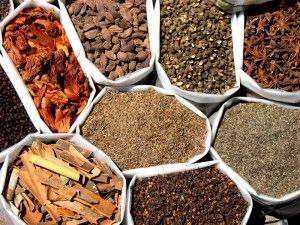 Ayurveda is an ancient system of medicine used in India and other Eastern countries. Much like Traditional Chinese Medicine, the Ayurvedic approach is holistic, and looks to address the root cause of disease, as opposed to simply treating a list of symptoms.

Ayurvedic herbs are commonly used as foods or culinary spices, and help to restore balance to the body. In Ayurvedic terms, when disease is present, it is the result of an imbalance in one of the three doshas, or the body’s vital energy.

These are pitta (fire), vata (air) and kapha (water). Herbs and food alike are used as part of a therapeutic regimen which may also include yoga, meditation and cleansing techniques.

The following herbs are considered a few of the most important remedies in Ayurvedic medicine.

They can be commonly found in most natural health food stores and herbal markets. Remember holistic treatments such as herbs are meant to complement, and not replace medical care.

Talk to your health care practitioner before using herbs for medicinal purposes.

Although traditionally an Ayurvedic herb, ashwagandha is now commonly used in herbal medicine throughout the West. Also known as winter cherry, it is naturally antibacterial, anti-inflammatory, and has immune-boosting properties.

It is your first line of defense against cancer and other immune system-related diseases. It helps improve vitality and combat insomnia, cancer, arthritis and diabetes.

Boswellia, known as Shallaki in Ayurveda, is an excellent pain remedy. It is naturally anti-inflammatory and analgesic. In the west it is called Frankincense, and has been used to treat both rheumatoid and osteoarthritis, gout, and general aches and pains. Studies have even shown that taking boswellia can alleviate arthritis pain in as little as 7 days without the harmful side effects of over-the-counter NSAIDs.

Coriander, or dhanyaka as it is referred to in Ayurveda, is a common culinary spice in both Asian and Latin cuisine. The fresh leaves are called cilantro, while the ground seeds are called coriander. Both contain natural anti-inflammatory and analgesic properties.

The herb is used in Ayurveda to treat indigestion, irritable bowel syndrome, fevers, respiratory infections and allergies. It is also a natural chelating agent, and has been used to help remove heavy metals from the body.

Garlic is revered by both chefs and herbalists alike. The Ayurvedic name for the herb is Lasuna. It is a prolific bulb that is used for a number of purposes. It is naturally antiviral, antifungal and antibacterial. It has been shown to be effective against the common cold and flu, and help enhance immune function.

It is used in both holistic and conventional medical circles to protect against heart disease and lower cholesterol. Garlic is a must-have for the home medicine cabinet.

Ginger, or shunti, is another versatile herbal remedy that doubles as a cooking spice. The root, or rhizome, is used to treat anything from benign conditions such as indigestion and nausea to more serious chronic problems such as arthritis and migraines. It is easily made into and herbal tea and makes a great home remedy tohave on hand.

Shardunikagurmar, or more commonly, gymnema, is one Ayurvedic herb which has undergone extensive study. It has been found to be effective in treating and preventing type II diabetes because it appears to help control blood sugar levels. It can be used as a natural sweetener, or taken in capsule form.

Amla, bibhitaki and haritaki are actually three herbs used together exclusively in an Ayurvedic formula known as triphala.

Amla is used to treat digestive disorders such as indigestion, gas, constipation, colitis and ulcers.

Haritaki is used specifically for constipation, but is also effective for hemorrhoids, dysentery and parasites or worms.

Together these three herbs make a powerful internal cleansing remedy. They help restore balance and improve regularity. However, they are used only on a period basis due to their cathartic effect.

Turmeric, or haridra, is the Indian spice which gives curry its golden color. It has been used in Ayurvedic medicine for thousands of years, but it has also been studied scientifically in modern day. It is naturally anti-inflammatory, antioxidant and helps strengthen the immune system.

It has been shown to be effective in treating arthritis, diabetes and even cancer. Keep this herb handy in the spice rack!