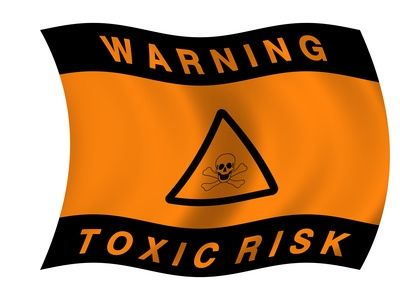 Flame-retardants in butter? Tainted kids’ cereal? Sounds like the plot of a horror movie, but it’s real – potentially harmful substances are common in the foods we eat, especially if you store things in plastic containers. How do they get in there and how can you protect yourself? Here’s what you need to know about the health risks and how to prevent them…

When you butter your toast in the morning, the last thing you expect is a side order of flame retardant. But that’s just what University of Texas researchers found when they tested 10 samples of butter purchased from Dallas-area grocery stores in 2010. Most were tainted with low levels of fireproofing compounds known as polybrominated diphenyl ether (PBDE). One sample had levels 135 times higher than average, according to the 2010 study published in Environmental Health Perspectives (EHP).

PBDE isn’t the only chemical consumers should worry about. There are a host of chemicals in food experts believe could cause serious health problems, including infertility, diabetes and cancer.

“Simply put, no one wants to eat toxins with their apples, or flame retardants with butter,” says Sonya Lunder, a senior analyst with the Environmental Working Group (EWG), a nonprofit consumer watchdog organization.

“However, with 70% of conventionally grown produce having detectable pesticide levels, it’s a reality,” she adds.

Where do these chemicals in food come from?

Some of these harmful substances enter our food chain when farm animals consume tainted food or water, says Arnold Schecter, M.D., professor of environmental and occupational health sciences at the University of Texas, who led the PBDE study.

These toxic chemicals concentrate in the animals’ fatty tissue, which is why they’re most common in foods containing animal or dairy fats, like milk or butter, he says.

In fact, chemicals in food packaging may be more widespread than environmental chemicals.

Packing materials could contribute up to 100 times the amount of toxins you’d get from pesticides or other environmental chemicals, according to a 2006 European study published in the journal Food Science and Nutrition.

Top pollutants that could be lurking in your meals:

Many of these chemicals in food, including BPA, phthalates and PFOAs, are endocrine disruptors - meaning they mimic estrogen in the body and interfere with hormone function.

Studies have linked these harmful substances to such serious conditions as breast and prostate cancer, diabetes, heart disease and early puberty, according to a 2009 report from the President’s Cancer Panel.

A  2008 study in the Journal of the American Medical Association also found that adults with higher urinary levels of BPA are more likely to develop heart disease, diabetes and liver problems. Other studies have suggested it interferes with cancer treatment.

A Threat to Unborn Children and Babies

Because they affect physical and mental development, endocrine-disrupting chemicals are considered especially dangerous to unborn children.

If absorbed by pregnant women, they can interfere with fetal development and cause long-term health issues in adulthood, such as infertility, diabetes, breast and ovarian cancer and neurological disorders, according to a 2009 position paper by the Endocrine Society.

Obesity Link?
Scientists are also considering the possible link between endocrine-disrupting chemicals in food and obesity. Researchers are exploring whether chemicals in food trigger the body to pack on pounds. In one 2007 study, published in the journal EHP, men with higher urinary levels of phthalates had larger waists.

One reason may be that “a large percentage of obese people suffer from chronic liver disease,” which makes it difficult for their bodies to metabolize and eliminate toxins like BPA, says Jane Muncke, Ph.D., an environmental toxicologist with Emhart Glass, a container manufacturer in Switzerland.

Also, “many toxic, persistent chemicals we eat with food remain in fatty tissue,” she says. (In other words, the fatter we are, the more chemicals we store.)

Chemical Cocktails
While much of the research has focused on the effects of specific chemicals in food, experts are even more worried about the combined health risk from chemical cocktails, which can happen when different products are packaged together.

“It’s very difficult to determine the effect of different chemical mixtures,” Schecter says. In labs, a combination of common food-packaging chemicals seems to be more toxic than the same ones individually, researchers at the University of London’s School of Pharmacy found.

Trouble is, “there are no government regulations for mixtures of chemicals and we don’t really know the harm to the general population,” Schecter says.

Minimize Your Exposure
Given the widespread use of plastic and other packaging materials, it’s nearly impossible to entirely avoid chemicals in food.

But you can take plenty of steps to minimize health risks: